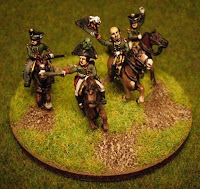 Well that's me finished the infantry command bases for my 15mm Old Glory Russian Army. 1st up the main command base with Barclay de Tolly with his bald head waving his had. I hadn't read about the Russians of 1812-1813 for an awful long time when I received the figures so it was back to school for me and thankfully fellow wargamers helped me out too. I wanted a little bit of variety to the main base so I added in a cavalry officer, line infantry officer and a foot artillery officer. 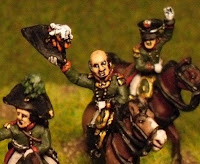 I tried to get some point of interest with the base and as 3 of the figures were looking to their right I picked out BdT's eyes so as to be glancing in the same direction as if some threat had come into view. 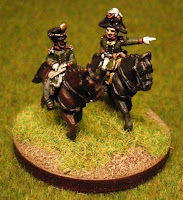 My next command base I made a jager officer picking over a map while an infantry officer points him in the right direction.

All the officers that have bicornes on I had to make feather plumes with milliput for them as well as a few epaulettes and little bits and pieces. 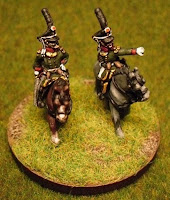 The grenadier officers are my favourite, for some reason they just caught my imagination. I am really chuffed with how well the Old Glory figures are turning out. When I 1st seen them lying in the box I wasn't sure how they would clean up but I am pleasantly surprised and they paint up not half bad at all. 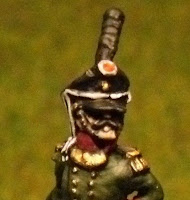 For a wee change I added in a couple of close ups of the faces to see how they would hold up.

I'm really enjoying my Russian project and to keep them flowing along I haven't been spending as much time painting and basing as usual. For a change I just spinkle 2 grades of sand on the base and sealed it them gave it a quick paint, wash and highlight before adding static grass and for me they are looking fine.

If you share the same interest in Napoleonics or figure painting please feel free to leave a comment.
Posted by Paulalba at 07:56 12 comments: 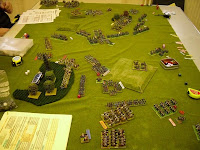 A lot of my photo's were rubbish so I salvaged what I could and put them into some kind of order. This was the only pic of the whole battle taken later in the day. Unsurprisingly the best of the pictures were from were I was sitting so apologies on missing out the other guys exploits. Especially the bold cavalry General Jamie de Lanark who rolled back almost everything in his path except those darn double 6 rolling guns.

The 1st action of the day saw Marshal Stuart de Law up against it with his heavy cavalry taking a pounding from the Austrian cuirassiers.

He was lucky they weren't able to follow up to finish the job and his troops were able to regroup. Stuart, Jamie and myself had a wee chat outside about what our plan would be and we decided to try and avoid the heavy Austrian presence on our far right. It was a tight little battlefield but Truth be told as usual my deployment was poor. I put my troops on engage orders to engage both Austrian brigades but was hampered by a small wood for early firing and maneuvering. As Robert quite rightly pointed out I was pivoting on my guns.

No matter, I set out my troops in the limited space ready to take the brunt of the assault and left the back ranks enough distance back that if the front crumbled they would not disrupt them. Also I sent my second brigade on a flanking move hoping to hit Robert in the flank if his troops were left unformed from melee.

I could at this point say that I had laid a cunning plan in the true spirit of Napoleonic warfare and that I had left a small (veteran) force intentionally to suck in the whole Austrian reserves while all the time planning to outfox my opponent and hit him in the flank but I would be lying.

Anyway that is how it worked out. Robert sent all his troops heading for my poorly positioned flank and amazingly I rolled like a Casino King! the 3 battalions Robert rushed in all faltered (and my guns didn't even get to fire canister!) The 4th assaulting battalion managed to put the 1 unit I wanted to see run into retreat and my outflanking unit managed to hit the unformed Austrians in the flank (at this point Robert did a really nifty move putting his rear battalion into square so the fleeing troops would funnel round them) The brigade broke and 2 of the 4 battalions were lifted and the rest of the brigade ran back 30cm. It was exciting times in the French camp. 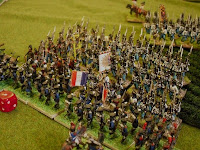 As you would imagine my opponent was a little rattled and quite rightly pointed out that my flank should never have stood, and my dice were very high but how many times have you been in a great position and your dice rolling has been crap? It's a game of chance, you pays your money and you takes your chance ;-)

Anyway for the rest of the game I fluffed about trying to get into a good position to destroy Roberts remaining assaulting brigade. We had a debate about where I could move my troops that had just duffed over the other brigade so they were not moving towards the rear of the other Austrian brigade while trying to get at the fleeing 1. It was all very interesting as to maneuver the 3 battalions in the space left to me it was impossible not to approach the rear of the other brigade. I can understand Roberts point of view as it was very much within my thinking that I could change my orders and hit the blighters in the rear, however I needed to move closer to them so I could give my other battalions room to come through.

Anyway in the rest of the battlefield Stuarts troops were fighting it out with JP (photo of John's cuirassiers failing to smash into Stuart's double hard French light infantry) and Jamie was destroying Roberts light cavalry before being given a bloody lesson in Austrian artillery fire.

Here is a funny rule: You cannot fire canister at the enemy if your own troops are in arc or within 20mm. I can understand that but when the enemy troops are blocking the arc I would have thought they would have been fair game? twice I missed out on this, Ah well it's all a learning curve.

Anyway time was running out and I rushed my assault and took a bloody nose. Robert managed to get stuck into my flank at last but I did have a good few battalions around. I have no idea who won but I would guess a draw was closer to the mark. All in all another good learning experience but the main thing it was a whole lot of fun.
Thanks to JP, Robert, Stuart, Jamie and young Thomas for an excellent game (young Thomas stepped in when JP had to retire early and seek medical treatment after pricking his finger on 1 of Robert's Austrian flag poles, JP's finger survived but the flag pole did not!).

We had an excellent General de Brigade Napoleonic battle at the weekend with the French up against the Austrians and I thought I'd take the opportunity to take some closeups of my buddy Roberts Austrian collection.

These are my personal favourite as the variety of poses makes it look like a unit under fire.

And the very colourful Austrian hussars. 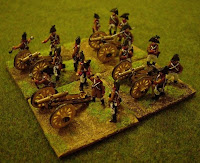 I'm not sure of the make of all the figures? 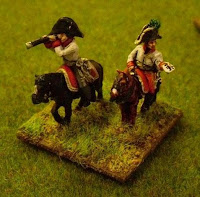 The majority will I guess be AB figures but also a fair number will probably be Battle Honours (artillery and command). 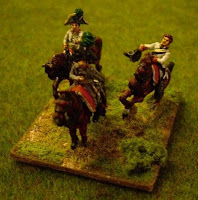 I have been told there is a great similarity with the Austrians from both ranges. Not surprising they were all sculpted by Anthony Barton. 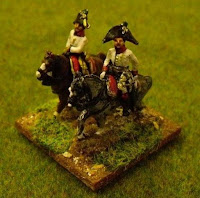 Whatever make they are a very good looking army on the table. 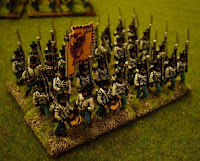 This is part of a 48 man battalion, I had 2 0f them coming at me on Saturday. Very tricky to shoot down. 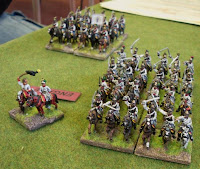 And some very pretty Austrian cuirassiers to finish off.

I'll post some pics of the battle as soon as I get some free time.

Just thought I'd take a quick pic of the command base I am working on for the troops below. 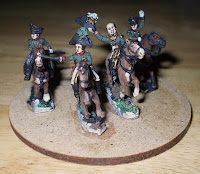 Last night I started on my Barclay de Tolly command group (I now have a nice name for a wee dog if we get 1, Barkly :-). I made my own feathery plume for Barclay and the cavalry general from milliput.


Well it's been a while since my last post and although I haven't finished anything off I thought it was about time I posted a little update of what's been taking up my painting time. 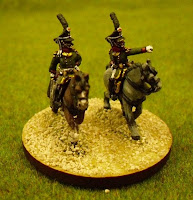 Last month (and this month) I've been mostly painting Russians! Phew, Old Glory Russians as far as my poor eyes can see, 12 battalions of foot and 2 artillery batteries are on my workbench at the moment as well as command stands and I am determined to get them finished.

I've managed to get 6 battalions based up awaiting the finishing stages and to be honest I'm growing fond of the Old Glory Russian figures. 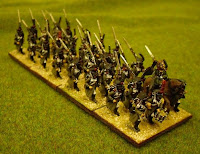 JP a wargaming buddy had slapped on the paint pretty fast for big Stu so a fair amount of cleaning up was necessary before I could get stuck into them. Thankfully the paint wasn't on too heavy so I was able to do some shading. Just a little extra work and they will be ready for the table. 6 battalions in roughly a month I wish I could do that every month.

I have a whole army of AB Russians I am itching to get at so I decided to try and get the Old Glory army knocked together as fast as I could without them looking too shabby.
I'll post more pics as I get them finished off.
Posted by Paulalba at 00:45 5 comments: