A wee video on the finished bits and what else I have on the go.

I've added in an NCO to the battalion converted from the newer AB French set. He's a fair bit bigger than the older Saxon range however he still fits in pretty well.

I've again tried to give a bit of variety to the unit by doing different colours of trousers and mixing up my shades of white on the uniforms and belts.

I also added in a converted officer in the blue/grey uniform that was apparently frequently used on campaign.  I started off a bit too warm on it and I'm not 100% happy how he turned out, however within the battalion he'll mingle and do fine.

What next? Well I've cleaned up another Saxon battalion and I'm painting some Saxon skirmishers and an ADC that I've converted.
Posted by Paulalba at 16:54 28 comments:

Well I should really be posting pics of a completed Saxon battalion however I caught the bug to push on with some Saxon command types to lead the troops. 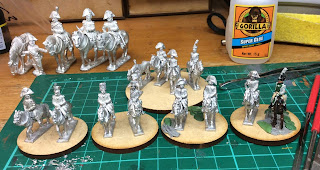 Not so long ago I spotted on a youtube channel that Peter at Calpe had released 28mm upper command troops for his Saxon 1813 range and I also heard mentioned that there was a Peter Bunde colour plate to go along with them.

It had been in my mind for some time to do some conversions to create my own Saxon brigade and upper command figures seeing as there are no appropriate figures in 18mm or at least not in the AB range. 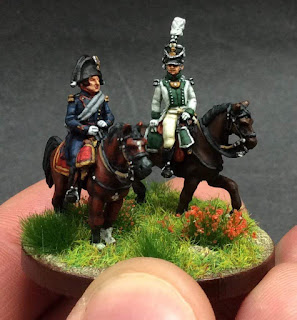 The finished figures are not 100% perfect in uniform but close enough for me and they are not all exact brigade commanders but officers that I thought would be kicking around the brigade and divisional command groups. The calpe commands are aimed at 1813 when the rank of the commanding officers was apparently a lot lower after the incredible loss of life in 1812. 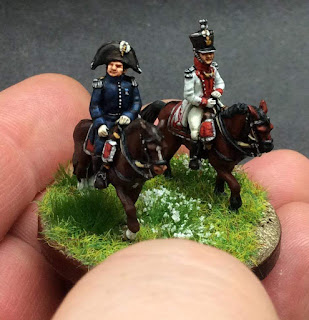 This dude is an inspector of reviews next to a mounted officer of the Niesemeuchel regiment. He has the silver/white metal buttons and fittings of that rank. 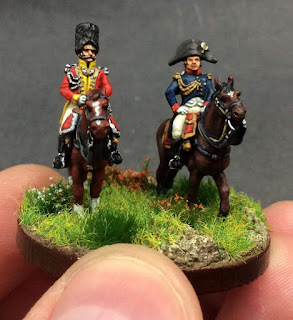 This grand chap is obviously a mounted Saxon guard officer with a converted AB French officer turned into an officer of the Saxon royal general staff.

I'm very happy how these guys came out, the head swaps look pretty good especially as some of the bodies were quite large so finding a head to match wasn't so easy. I was interested to see that in 1812-13 the Saxon upper command were wearing the bicorne shoulder to shoulder. I had assumed that this was the pre 1810 style as there are a number of colour plates showing it worn in the later french fashion of front to back? I did converted a brigade command a number of years ago in that style.

Anyway I have enough done to get me started so I'm gonna move into something until I need to finish the rest.

Hope everyone is enjoying the hobby at the moment, happy wargaming!!!
Posted by Paulalba at 05:12 24 comments: