Painting for the Philippines

Hello, If you regularly follow my blog you will know that my wife's family lives in Tacloban City, Leyte and was caught up in the typhoon Haiyan (Yollanda) that hit the Philippines in November last year. Things, as you can image are still tough for our family and there is still a long road ahead. We have started to help our family to rebuild etc and have a few things on the go to help that I'll post as they come together.

I've been thinking for a while about painting some Naps to sell to help raise cash for the rebuild and a few nights back began some Fantasssin and Old Glory command bases to test the water with a look towards doing AB commands and possibly other stuff if there was an interest, I'm basically trying to balance out if it's worthwhile or am I better just doing extra overtime shifts at work as Im doing at the moment?

Anyways I'm havering, the real reason of my post . . .

Recently, I received a really nice email from Kurt over at Express Miniatures. As it turns out Kurt through past employment has had the chance to visit the Philippines on various occasions and was obviously concerned by the disaster that hit last year. Kurt has offered to purchase and paint up either a 36 man battalion (or 32 if you prefer Prussians/Russians/Saxons etc) or a 12 figure cavalry squadron of AB figures out of his own pocket and send them over to myself to either auction on ebay or sell here. The figures would be unbased so whoever buys them can base them in their own style or if you would like me to base them for you for a small additional fee I would be happy to. The proceeds would go to my family and their community in the Philippines to help out.

Just to let you know Kurt asked that this could be an anonymous donation but I feel it only right that he should get the credit for his work!!!

The problem we have is what nation and what unit to paint. To offer the unit in an auction on ebay (losing money to ebay) or would someone want to jump in and order the commission for themselves? also what would be a fair price for a newly painted AB battalion? We have thought a price of around £90 as a fair price as the AB figures will be purchased by Kurt (what do you guys think?) postage would be at cost and if you want basing done by myself we can work out a price. I am opening this up to you guys for your views and if anyone would like to make an offer feel free. You can either leave a message here or email myself through my profile. Again the money will be going straight to the Philippines, no profit by Kurt or myself.

Ok, 1st try with a post put together on iPad (strange ,I couldn't upload the pic I took on the iPad into blogger?). I've been working on a little project with plenty of head swaps. Still a long, long way to go but I wanted to share my progress.

Craig and I have been discussing Von Lutzow and his merry band for a good while now and I decided I would give them a bash. I used the AB landwehr figures for the bodies and have sampled heads from many different AB Prussians. I initially thought the horse artillery gunners would be perfect for the large landwehr bodies and they did work very well for a good few however I hadn't noticed how many size differences there were in the AB landwehr range. I believe the advancing/firing AB Prussian landwehr are 1 of the best lines of the AB range, loads and loads of character and poses.

You may notice that Eleanor is missing? I plan to do an Eleanor casualty or maybe 2? Kawe has done a cracking 28mm Prussian medic set and I plan to try and copy 1 of the medics into 18mm to be treating the wounded drummer girl. Fingers crossed
Posted by Paulalba at 06:17 24 comments:

Hello, I hope everyone had very peaceful New Year celebrations and I wish you all the very best for 2014!
I have been working in and out through the festive season (and have been loaded with man flu to) so haven't really had a chance to do any more painting (however I'll be happy when the money comes in!). My buddy Craig in Australia sent over some more pics of his ecellent Napoleonic collection, this time more French. 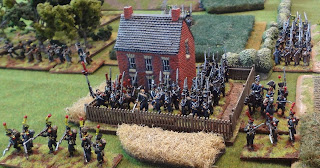 Small shot of the Legere in defensive position
Brigade Belair
The second infantry regiment of my French 12th Division from Bertrand's 1813 IV Corps to share is 8e Legere. This regiment, commanded by General de Brigade de Belair is represented by 4 battalions (I, II, III, and IV). The Regiment served in Dalmatia and Italy during the 1809 campaign, Russia in 1812, Germany throughout 1813 and won a battle honour for Wagram.

Legere altogether
I/8e Legere is again, a standard French light battalion of the period. These figures are all AB, and were painted in 2008-9. Again I used a standard layered block painting style over a black undercoat of enamel spray. Highlight is limited to faces. Painting gear is largely 0 through to 000 brushes, and Vallejo colours. The blue is a dark sea blue, which although dark, has a slight green tinge to it. This brings out the contrasting colours on the piping nicely.

I/8e Ligne
I have done this unit as a 36 figure battalion, with six companies of six figures each. As per usual, I have created duplicate skirmish bases for the voltigeur companies. Under the rules we play (GdB) we are able to deploy half the strength of light battalions as skirmishers. For high quality units, this can be as high as 75%. That makes for a lot of duplicate skirmishers.

skirmish line
Although the orbat I have chosen is for 1813, I have chosen a uniform for the elite companies from the pre-Bardin period. Who could resist voltigeurs in colpack, and carabineers in bearskin? Not I, and certainly not for the first battalion, which also carries the regimental eagle. The plume combinations I took from Osprey, which indicates a red tipped yellow plume for the voltigeurs of 8e Legere. All other chasseur companies sported green pom-poms and white cords. 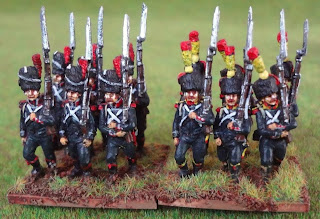 elites and voltigeur company
The next battalion is II/8e Legere. This is similar to the first battalion in structure and size. The key differences are that there is no standard carried, and therefore no porte-aigle; and that the elite companies wear plumed shakoes rather than more elaborate head-dress.

II/8e Legere
The next two battalions (III and IV) are quite similar, and probably a more realistic depiction of French light infantry during 1813. The figures are largely in greatcoats and covered shakoes. The battalions carry no colours. The only distinction I have allowed them is a porte-fanion in the carabineer company – carrying the green company marker with a grenade on it. I picked up the idea from the colour plate in the Osprey on Napoleon’s Light Infantry. 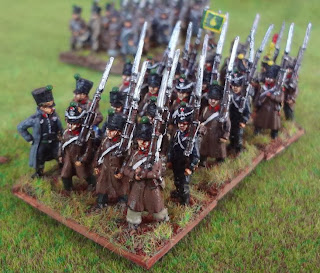 IV/8e Legere
Of course, these also have their own duplicate skirmishers.

skirmishers III/8e Legere
For the command element of this brigade I have created a small base which adheres to my standard two mounted/ two foot figures for brigade command bases. This stand depicts GdB Julienne de Belair, former Colonel of 8e Legere promoted in February 1813. At closer inspection I think the paint job looks a little rougher than I’d like. The accompanying figures are a carabineer officer, and a voltigeur (too tasty to say no!), and a mounted ADC. 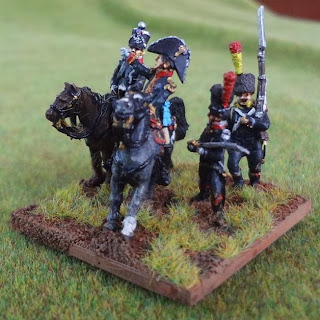 General de Brigade Belair
The regiment/brigade takes up a bit of space when deployed, largely because of the skirmish capability.

Complete Brigade
The 1st battalion is posted in the large dwelling to the right, with half its strength deployed forward in the fields in the foreground. The second battalion is posted in the small hamlet to the left, with its voltigeur company deployed forward. To the centre rear is the 3rd battalion, in column, and to the left rear is the 4th battalion, with half its strength deployed as skirmishers in the small woods on the right flank. GdB Belair is in the centre, directing traffic, and earning his Legion d’Honneur.
This is a largish regiment, but I did not mind as the legere uniform is an interesting departure from the ligne battalions, and the elite companies have the potential for some interest. I think that my style has improved somewhat since I did these, but they still work well on the table. They served my mate JP (Ed: Does every Napoleonic group have a JP?) well when they last made it to the table He stormed a defended ridge with them, only to be ejected when finally overwhelmed by a horde of landwehr. C’est la guerre.
Posted by Paulalba at 04:26 9 comments: