I thought it was about time these guys were brought out of their Chinese take-away boxes and restarted. I was really enjoying painting my Bavarians when I decided everything should be put away until the dust in the loft settled.

I finished the remaining base colours and stuck them onto some new bases last week. So with a day off today I got the white glue out and stuck on some sand, let it dry and then cleaned up around the feet etc then sealed the sand in with a very thin coat of PVA. 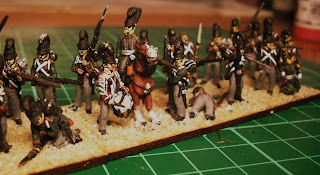 Next step will be to get the ground work painted, dry brushed and then tidy up the black undercoat on the areas I have rubbed off before I finish the detail work (buttons, highlights weapons etc). 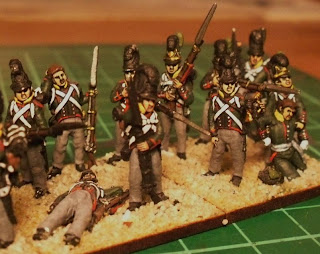 Despite the many false starts with them they are starting to come together. I should have finished them long ago so if I get them finished by the end of October I'll be happy!
Posted by Paulalba at 12:33 15 comments:

Totally forgot about the 2nd part of our club battle back in September. Just to fill you in JP, Jon B and Des have been embracing the GdB deluxe addition while I've been absent and have been bumping and bashing their way through the changes. To be honest looking back we were all over the place with a lot of our thinking but it didn't matter. Our wee men were out and moving around the table and that's the main thing! 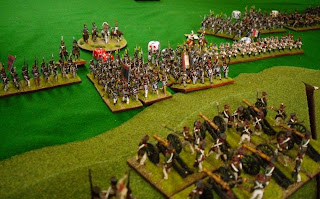 Anyway when we last seen them David's French columns were running head long into a six gun Russian foot battery!!! 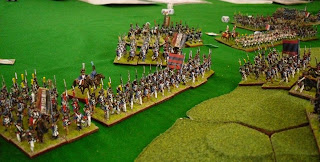 Enough to make any grown man fill their boots. Still they held their nerve and managed to charge home. 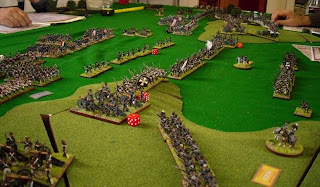 Meanwhile along to our right the rest of the Prussians and Bavarians were holding their own. 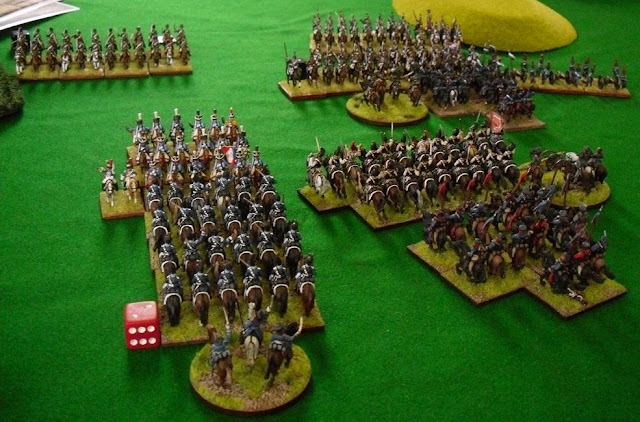 I was able to bottle up the French cavalry reserves and I had my fingers crossed that time would run down before they could break through. 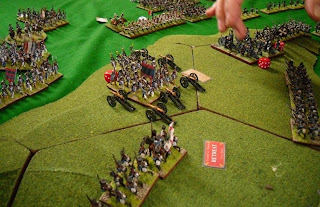 This 1 is for my brother David!!! His newly finished French battalions captured the guns, massacred the gunners and were well on the way to capturing the main hill. 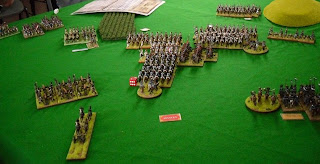 Then things started to look decidedly dodgy at my end of the table when the French guard began to appear on my left!! (who thought up this daft scenario anyway JP???) 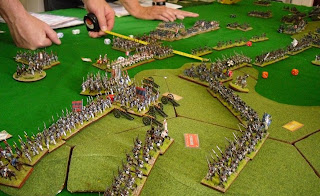 As the day went on more and more French poured onto the hill and with only Prussian reserves in (well reserve) things looked bleak to say the least. 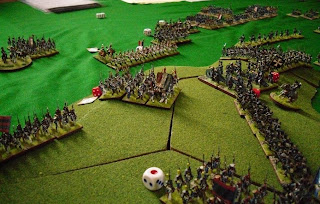 Darkness was beginning to fall and we could hear a rather large lady in the room next door practicing her vocal exercises so we decided to call it a day. The French had taken 1 of the main hills (no wonder with the amount of troops they had). The Guard had begun to turn my flank and our centre was no more.

Loads of mistakes made but we had fun.
Posted by Paulalba at 16:58 11 comments:

Fun in the Loft

Having a weekend off has become pretty unusual for me so when I end up with 3 days off I don't know what to do with myself. I know I should be cracking on painting the loft to get it all finished and ready for carpeting but I've had a few new arrivals and fancied messing about with them. 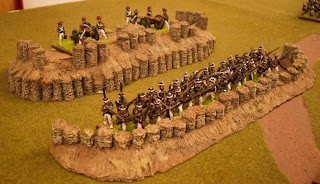 1) I picked up a couple of resin redoubts (as well as fleches) from a wargamer in the USA. My 40mmx40mm artillery don't quite fit them so I will have to do some sawing/patching to sort that out. I will be mounting them on some board and repainting them etc. 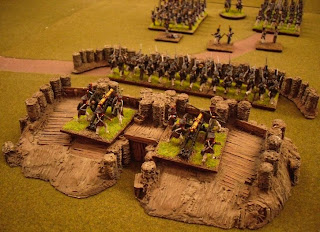 A little tester for possible battles to come. 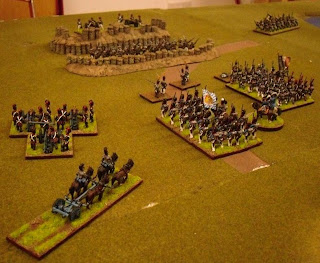 I don't have many French done so it will be down to the David's to supply an enemy for my Russians to fight. 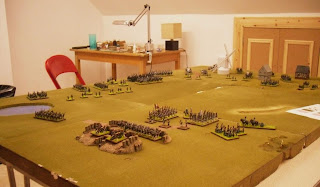 2) My brother David managed to pick me up some tables and chairs for our wargames. Brilliant!!! 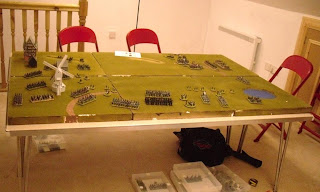 He is going to see if he can get me another table so fingers crossed. 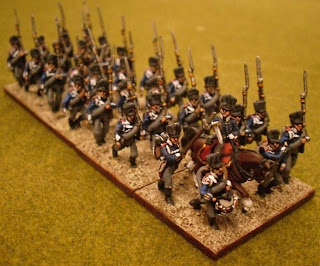 3) I mentioned a few posts back that I picked up some Fantassin Prussians from ebay. Well this is them with a couple of spare AB's and a BH mounted officer added in. 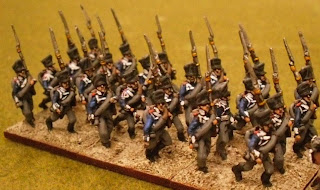 All the figures in this photo are Fantassin. I have pretty much totally repainted them. To be honest I'm not that impressed with the casting. The figures are the same size as AB's but some of the detail is pretty rough and there are a few arms missing. I have no idea where these figures started life so there is no way of telling if they are copies or originals? 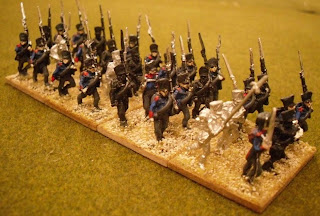 Anyway I have based up the 2nd battalion and added in some spare AB's to fill up the numbers. This is how the figures came to me so I'm happy how the 1st battalion came out. 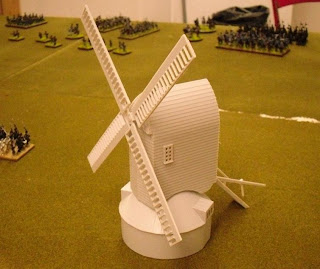 4) David spotted this while on holiday (and I pinched it!) and thought it would be good for something. I have no idea if it is the right period or style for our Naps battles? I was thinking of using it for Saxony 1813 or France 1814, possibly even Belgium 1815, what do you think?
Posted by Paulalba at 15:40 11 comments:

So it's now the 1st of October and I've been working flat out since these pictures were taken. JP (shown below in a hooped jumper that his wife knitted him for Christmas last year) has been off to Spain golfing with friends and back for 2 weeks (with the usual tan) and I'm only now getting round to posting the battle report for our game back in September! 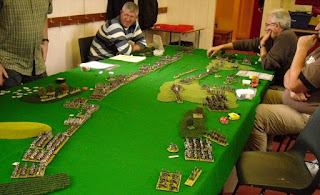 Yet another rusty Napoleonic game: We had a good crowd on the day (8) for our game alone. the 3 Johns, JP and Jon B have moved onto the deluxe GdB rules so they were the order of the day. DC, Tam, DEsMONd, my brother David and me. 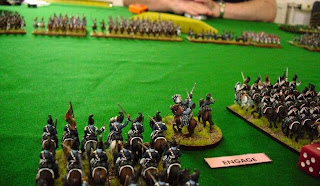 The wife and I had, had a skin full the night before (Mai managed to drink a full 3 Coppaburgs instead of her usual 1 glass of red before falling asleep) so I was happy to take a flank. I had a mixed heavy cavalry brigade of Prussian and Russian Cuirass. 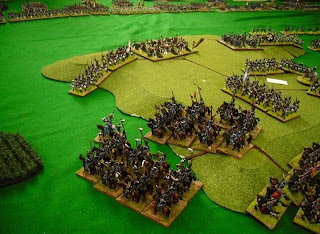 With a light brigade of Prussian lancers (with some Russian cossacks attached for effect, and they did panic their opponents!!!). The Lancers (that I bought myself!!!) were painted and based by JP for his own collection and look great. 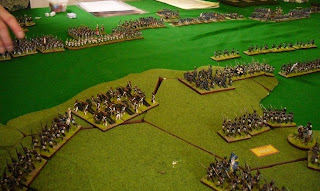 In the allied centre (my right) was Jon B with a mixed Prussian/Russian infantry brigade with supporting artillery holding 1 of the 2 French objectives. 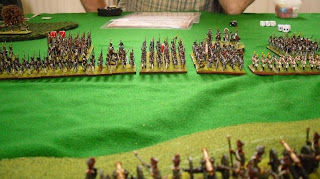 Facing Jon was the main French thrust from David P Snr with his newly painted French battalions (and 1 of mine ;0) and John M with another French brigade slightly off to our left. 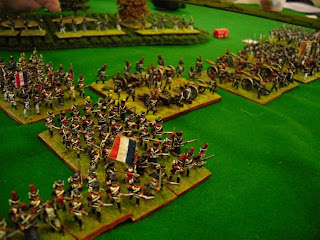 The French goal for the day was to take 1 of the 2 hills commanding the battlefield. I thought that was a bit too easy with the amount of troops the guys had!!! 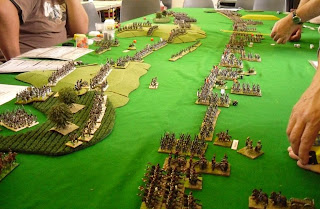 JP was assaulting our far right (DC) with another load of French infantry. 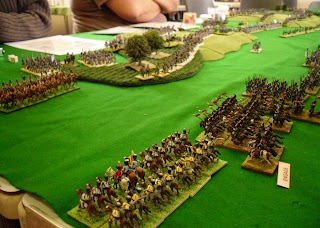 As well as a horde of French light cavalry.
Posted by Paulalba at 16:27 4 comments: