So that's my 1st battalion of Russians done with the Army Painter and I have to say I am chuffed and also shocked at how fast they painted up. I can see 2 ways that I could speed them up a little more, 1 don't touch up the belts and straps and 2 use a lighter flesh base coat and don't touch that up after the AP. However I like the effect you get when both are done so I will continue to do that until I am really pushed for time.

I'll put them aside for the moment as I move onto the 2nd battalion (I cleaned and based the 2nd lot while I was waiting for the AP to dry on my final batch). 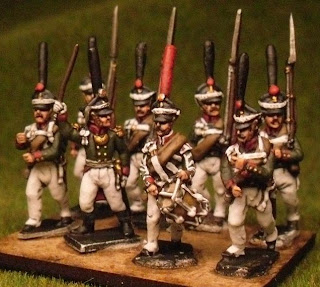 It may not be perfect but it does fine for me. I would continue to undercoat in black for the Russians. I didn't undercoat at all with my Saxons as I was lazy and they were going to get 3 to 4 coats of paint etc..

This has got to be the fastest I have ever painted a battalion of 15mm Naps just short of a week of evenings painting with the odd couple of hours here and there. 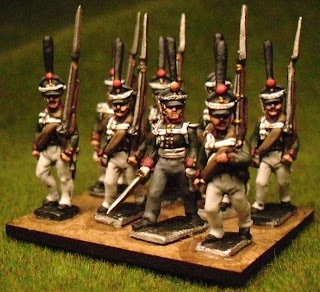 Sorry about the picture quality, my wee light is just not up to it. You can barely make out the shading and the white is pretty exposed. I would have waited till the unit is all finished off before posting but I want to get straight onto my next battalion as I have a crazy couple of weeks at work coming up.

Almost forgot the comparison pic. I think they fit in pretty well with the other AB battalion I painted with my previous method. 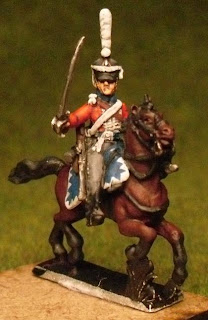 And lastly my hussar for the Isum regiment again army paintered. These will be nice! 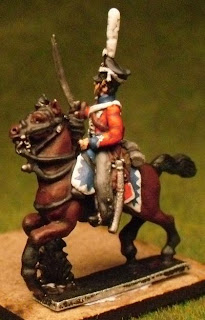 This guy was already painted to a basic wargames standard when I picked it up on ebay. I blocked in the colour and tried to match as best I could and after the AP just highlighted here and there. I had forgotten most of the Hussar uniform finer detail so had to quickly read up a bit. Still a little more to find out.

All comments good or bad are much appreciated and if you spot anything I have missed or needs correcting please point it out!
Posted by Paulalba at 09:14 31 comments:

I hit 39 the other day, I don't mind watching the years go past etc and I had a nice time, the wife was very pleasant to me for the week so that made me pretty happy and when I let big Jon know I was free for a game on the Saturday Jon and JP set up a 15mm Napoleonic battle for me (sweet!). However this turned out to be a double edged sword!!!
We had a great game, really great!!! JP was his grumpy self trying to hurry the game along as we fell about laughing at loads of daft stuff and I managed to slip in a wee dig about a fellow wargamer bashing 7 bells out of old baking trays because they were to tight to buy steel sheet to line their storage boxes (10mins past before the penny dropped and JP shouted out "that was me you were talking about ya cheeky b******d" with a smile on his face). Anyway I was on the winning side and it was a great day, I think I said that already?
However there was 1 thing that really kicked me in the teeth, somewhere along the way this past year or 2 I slipped away from painting my Russians. We are in the 200th anniversary year of Napoleons invasion of Russia and despite having thousands of AB and Old Glory Russians to paint I have only managed to finish 9 Russian foot battalions, 2 foot batteries, a cuirassier regiment and a horse battery. I needed to do something and do it fast!!! 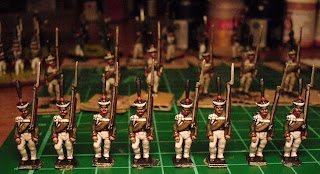 So enter my new master plan! I have put all other troops out the way and cleared the workbench for Russians only using the Army Painter method I started with my Saxons. I have been finding spare time very hard to come by however the wife is onside now that she understands the magnitude of my task ahead and the significance of the year (truth be told the sister of my wife came down to visit for a few days and showed far more interest in my wee men than my wife has ever done and so she is now making up for lost time, asking questions and looking really closely at the little dudes, she also got fancy new glasses so I guess this must have helped to?). To start with I decided what battalions I will hit 1st, I only have 2 regular grenadier battalions so I figured i'll get them out the way before moving onto my 2 pavlov battalions and that's it for starters. 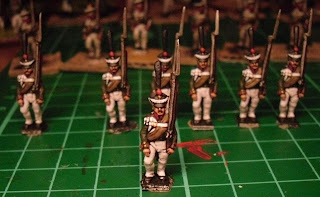 So where was I? Oh yeah Army Painter, well I am pleased to say it still rocks my painting world. As far as I am concerned it's the best thing since sliced bread. I'm blocking in my paint like I was 10 years old painting my airfix Germans then brushing on the dark tone, waiting till it's dry and picking out highlights on the face, trousers, belts and leatherwork. painting the buttons then a matt varnish and I'm done. I've experimented highlighting the coat but there is no real difference. 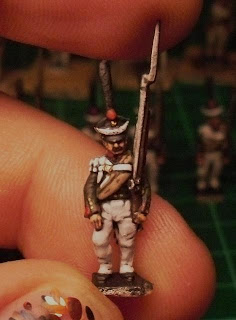 I have spent maybe 8 broken hours in total working on the 1st battalion (as well as clearing up the 2nd and also a light battery) and I really only have 7 figures still to AP and the rest are well on the way to being finished. I am pleased with how well they paint up.

Even the gear comes out looking good.

Except for the highlights on these guys really only the command figures to go. 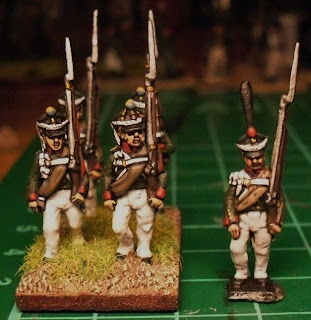 I realised something else, the figures I am painting with army painter take less than half the time as with my original style and to be honest don't look out of place beside them and the flesh looks better. 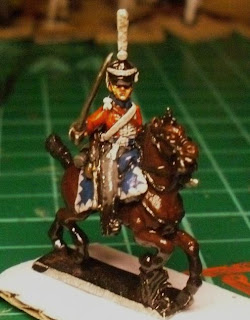 A little side project: This is a test figure for the Isum hussar regiment. I picked a bunch up on ebay and did a little work to him before applying the army painter. Finger crossed he will turn out fine!
Posted by Paulalba at 16:39 18 comments: