I managed to finish off 2 of my Austrian command bases. The photos are a little dodgy as my camera is still suffering from the jam my wife managed to smudge on the lens
(just can't quite get it clean lol!). 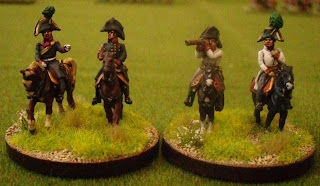 All the figures are from Battle Honours. The casting is not to bad on the bodies although there were a couple of small holes and the legs are pretty thin but overall still nice figures. 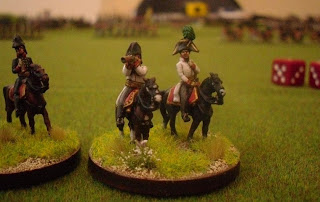 I used some flowers that were on a bunch of FOW Germans I bought at the Falkirk wargames show. I don't plan to use them on my battalions but they look quite nice on the commands. 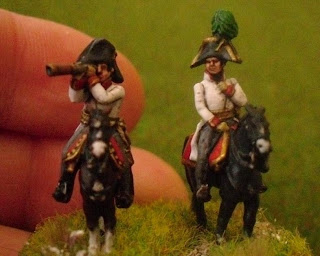 I had a wee bit trouble with my varnish so had to do a second coat leaving the figures a little satin however I am happy with how they turned out in the end. 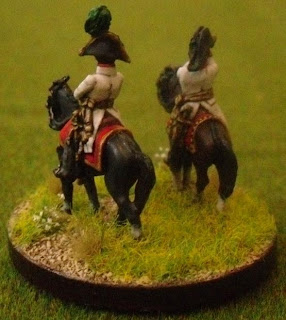 Please don't copy the uniform as I am not 100% on how accurate they are as I didn't do much research on them . Oooops!!! 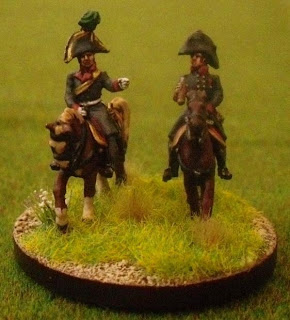 So our Austrian army has a couple of brigade commands now and can fight unhindered as they were being led by Prussian commanders in their absence (never a good mix!!!). 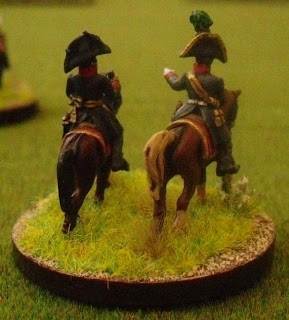 Our Austrian command figures arrived the other day, 2 hours before I headed out for work. I was tempted to clean them up as I knew it would be a few days before I would get a chance however I resisted.

When Cameron and I played the other night we had to use Prussian brigade commanders and CnC so I was determined that by the next time we play the Austrians will be all Austrian (except for the Saxons ;0) 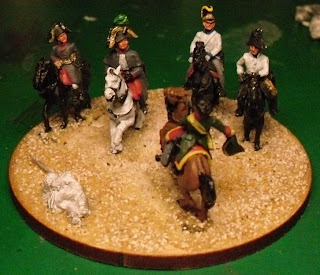 So I bashed together a Battle Honor's CnC with 1 added AB figure on BH horse (can you spot him? Na I wouldn't be able to either as they are exactly the same size and style). There is a wee French casualty added to. 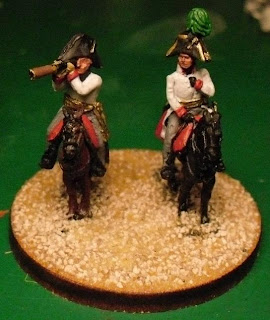 1st of the brigade commands. I know almost nothing of Austrian general uniforms other than the pics I have seen on line so my apologies if they are wrong. 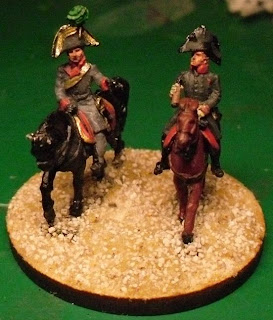 And the 2nd. I still have to block in a few areas as well as paint the bases once the sand is dry the apply Army Painter. 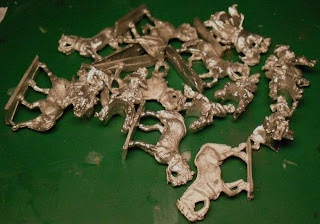 I didn't take a photo of the whole group before starting painting but this is Cameron's batch. Swapped in a few different horses as almost all the horses were in boring poses. 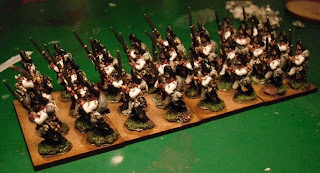 Cameron bought a brigade of OG German grenadiers from Robert to start him off, I cleaned this lot up and hit them with AP before detailing them. The turned out not bad at all and when Cameron finished the ground work the will fit in with his army. 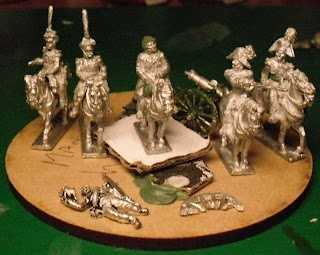 This is a little side project that I would have finished long ago if not for the Kutuzov figure I converted. I have never like the head on the AB Kutuzov figure and found a great head on 1 of the early AB Prussians. I clipped his hat off, drilled and pinned him as well as adding the soft cap in hand. The block I have is the sash and medals etc, I have never seen Kutuzov wear his sash on this side of his body and it bugs me as I don't know what colour to do it. My buddy has suggested blue silk, If you have the answer please let me know and also I am not sure if I should add eppaulettes, I guess if he has all the medals he should have the eppaulettes to? I also did a couple of other head swaps, I'm chuffed with the mounted guard officer.
Posted by Paulalba at 14:58 19 comments:

Life has been busy, very busy however a spark has been ignited!!!
My buddy Cameron who lives maybe 200-300 metres away has caught the Napoleonic bug (praise be to the lord!!!), His army of choice (for the moment as we all know how these things go) are Austrians. He has bought some older figures from our friend Robert (far to many figures for 1 man!!!) as well as us both buying BH figure from timecast. 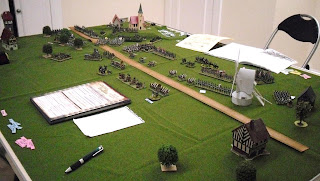 I can't tell you how long it has been since I last played Naps although if you look me in the eyes you would know!!! Tonight the planets were in perfect alignment and we were able to have our 1st Naps game (2nd if you count a run through at Roberts). Now I haven't properly read the new GdB rules/book and although Cameron has had my copy for the past few months and due to life commitments neither has he yet, we still wanted to give it a bash. We decided straight out to talk through each process on what we planned to do etc and to basically learn the rules. 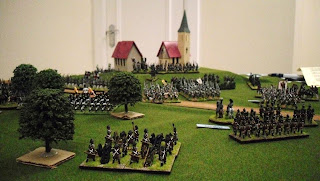 All the terrain is rough or donated by friends and you have to trust me that the buildings will come to life in time (the church has a fine destiny planned). Above my Austrian artillery taking there first casualties from the enemy in battle. 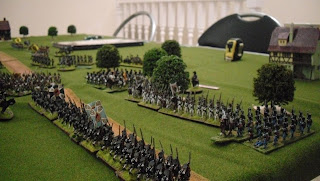 My Saxons getting a rare run out along side their Austrian allies. 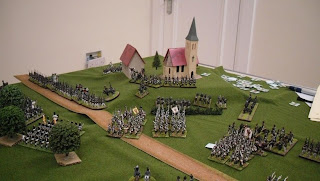 Cameron's Austrians started to pressure the old church that commands the road networks of the area. 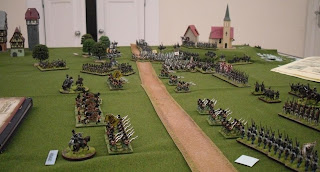 A big thanks to Mai who very kindly brought up some chicken legs and refreshment for our evenings wargaming. 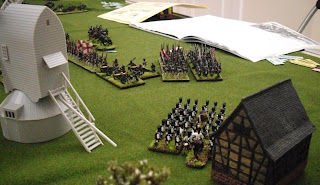 This windmill was bought for me by my brother David, It will be great scenery when finished. The armies are still in place and we will continue to fight on when we have the time.

I managed to finish these guys off tonight, they have been finished for a while now just awaiting their flag, Cameron was good enough to drop 1 off. 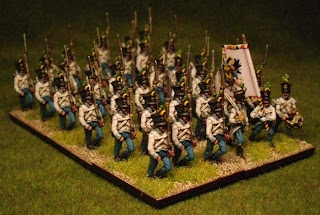 All in all a nice little unit to start of my Austrian army. Like everyone I would love all my armies to be from AB however my spare cash won't stretch to another AB army so Cameron and myself have made do with Battle Honors, the older range from Mr Barton.

The figures are showing their age now as there is only 1 marching pose and the casting has loads of flash and the odd hole however they are still very nice figures for the price. 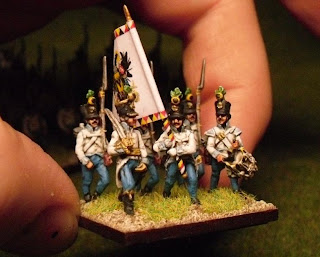 The flag mans face had a large chunk of flash on it and this is the best I could do with him. Rocky Balboa would be proud, Yo Adrian!!! 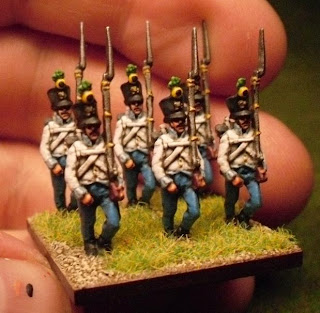 For speed I have left the thigh knots and side seams off the blue trousers. 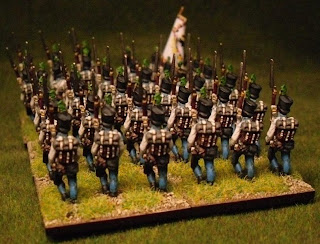 I actually think the figures look better from behind as the equipment is pretty cool. 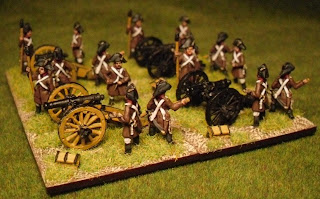 I still have to finish my guns off for my artillery. I am sure I have mentioned it before that I really don't enjoy doing artillery (mainly the guns). They are usable at the moment so it maybe some time before I finish the guns off. The troops go into action this week as part of Camerons Austrian army
Posted by Paulalba at 14:41 13 comments:

I was going to wait until I have them all finished before pposting them however I thought I would do a quick WIP. This is my 1st BH Hungarian infantry battalion done with AP and I am chuffed how they have come out so far. 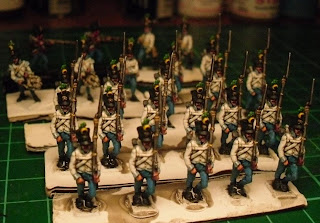 Sprayed white 1st then I blocked in all the main colours then brushed on the AP. 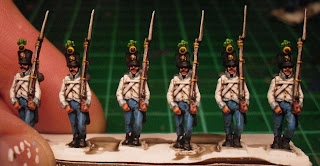 I did them with sky blue facings (now I know this is wrong as they fought in Italy), no matter!! 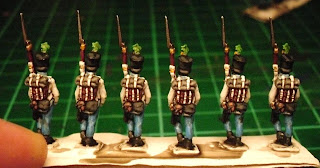 They will do for me and the last 13 are just waiting for the AP to dry. 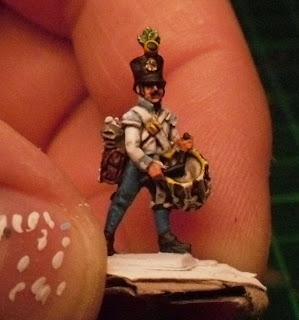 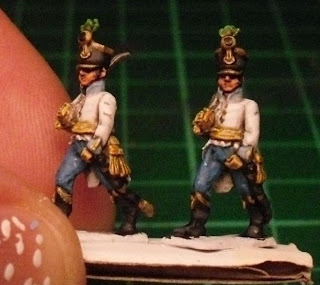 As did the officers 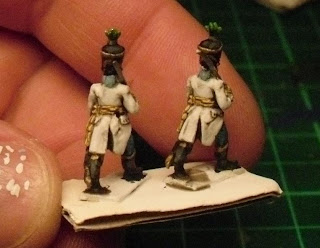 I know the BH moulds are old as there are loads of little imperfections on the figures. They still look good. 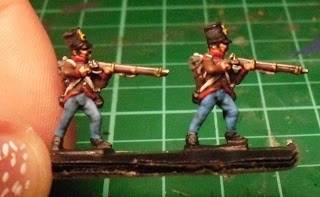 My Grenz are well underway too, they were sprayed black 1st.
Posted by Paulalba at 10:26 16 comments: