The past couple of days when I had an hour or 2 I've been finishing off the bases of my von Liebenau grenadier battalion for 1812. I apologise about the picture quality as I'm just starting to get to know our little pink digital camera again since picking up a new laptop. Those of you who know Saxons of the period will know that for 1813 I can add in 2 companies of grenadiers from the yellow faced regiments to make 1 of the combined grenadier battalions and that's what I plan to do at some point this year. 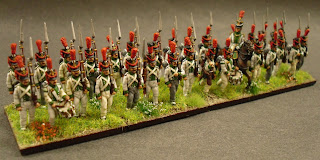 This is my 4th Saxon battalion finished and I'm coming close with a battalion from the von Rechten battalion so if I can get that ticked off that will technically be a full brigade. I say technically as I have went astray with the facing colours doing battalions from all 4 brigades. I do plan to correct this over the coming year. 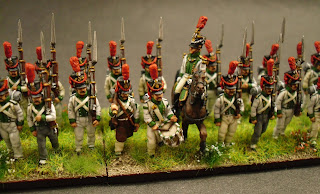 I'm also looking for an alternative to the 1 mounted saxon officer pose and I think the new French mounted commander mayfit the bill although I'm not 100% sure who will make the best Saxon head swap victim??? 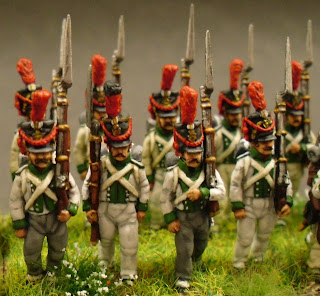 This is an NCO from the new French line with a Saxon grenadier head pinned in place, I think he works pretty well in his new role.

Now seeing the battalion all based up I'm pretty happy now that the troops have the full dress plume and fittings on the shako as in 18mm it certainly will help them stand out from the crowd.

A wee rear shot. The turn backs of the Saxon grenadiers should have little green grenades sewn on however I wasn't keen on how they were looking as most of the turn backs are partially hidden so I've left them off. So slow progress on my Saxon army, I'm Looking forward to doing some of the more exciting elements of the army, the light cavalry, light troops, artillery and command.

I'm a little slow on my blog posts again although I have been cracking on with my latest Saxon battalion. Well past the half way point now and I'm happy how they are coming together. I'm still enjoying painting the uniform and the yellow facing hasn't been to much trouble.

So 21 down, eleven to go! However I am about to head off on a few shifts so it will be next week before I get a chance to work on them again. Hmmm. 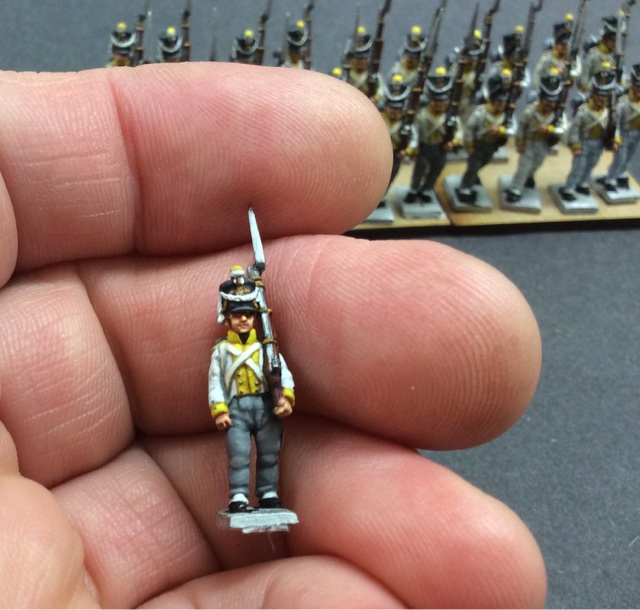 I've stuck to the combinations of Iraqi sand, pale sand and ivory for the cream shaded uniforms then light grey, foundry white mid and Vallejo off white for the White uniforms. trousers ive been working on different combinations to give a nice variety in the battalion. 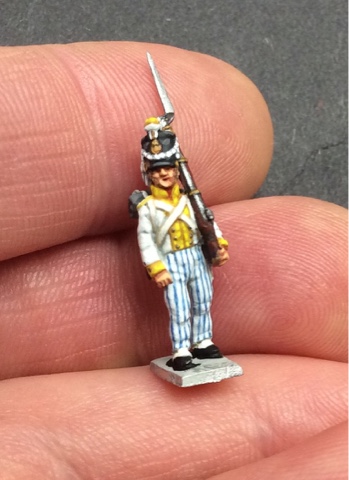 I also decided to have a go at the ticking material occasionally seen on campaign. I blame Kawe of Westfalia Miniatures for this as he included an illustration in his colour plates. To be honest I'm very happy how the have come out so thanks Kawe!

So that's it short and sweet.
Hope everyone has a great weekend and all the best to Scotland for their game against Italy!!!

Again sorry about my lack of activity in our blogging community, life has been pretty busy so fitting in painting time plus blogging has been tricky. Good news for my Saxon project is I have all but finished my von Liebenau grenadier battalion plus I have started another line battalion. I have also joined in a 'Community Big Build' over at MyWargamingLife that I'll explain at the end.

I made a video to show what I'm aiming to get done this year:

So I've managed to get the von Liebenau grenadier battalion based up, they were a lot of fun to paint. I considered trimming the plumes down and shaping them to pom-poms however I figured it was a lot of extra work and they will stand out well on the table, full dress does make them more eye catching in 15mm.

The more I read about the Saxon army of 1812-13 the more I enjoy painting them. They seem to have been a hard fighting army that fought on against the odds with lack of ammunition and support at times. I'm really enjoying putting the army together and hope my interest will stay strong through the year. 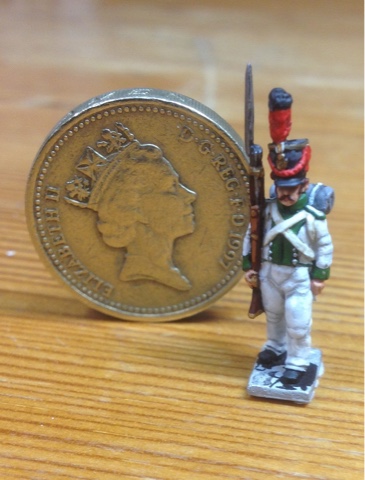 This wee guy is a conversion from the new AB French sergeant with a Saxon grenadier head pinned in place, makes a nice addition to the battalion. I hope to do the same for the rest of the line battalions I've still to do using the same grenadier figure with the plume reshaped as the head matches the French body well. I've been thinking about the Saxon uniform and it's perfect for the tabletop as it gives you the striking appearance of the Austrians with the added bonus of a good flash of colour to help with the snow blindness when painting them. I think they are becoming my favourite army to paint? 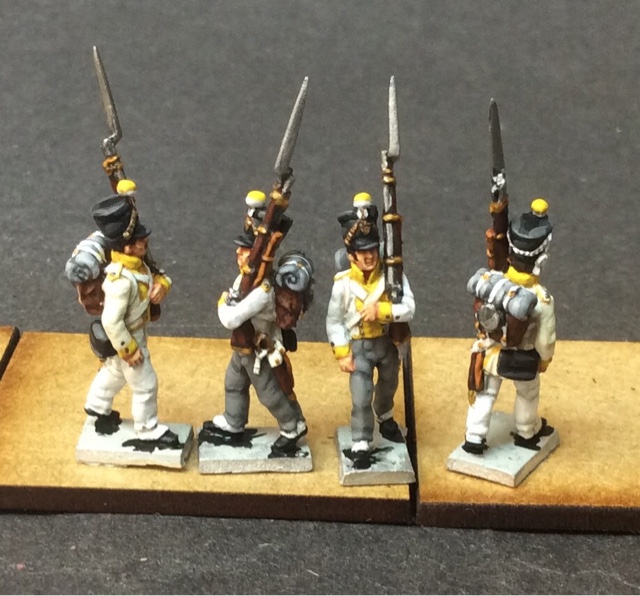 I have also made a start on my next line battalion, I need 2 yellow faced line battalions for the 1st brigade for 1813. These guys will be the 2nd battalion von Rechten. I'm just working out my yellow colours at the moment using Vallejo paints. I could have went for another green faced battalion but I will try to mix it up a bit to keep my enthusiasm for the project fresh.

Ok so I mentioned the 'Community Big Build' over at MyWargamingLife. MyWargamingLife is a pretty new wargaming website that an enthusiastic friend from over on YouTube and his buddies have started for our wargaming community. It's a pretty friendly place where gamers, figure painters and hobby enthusiasts can come together to discuss our hobby and show the projects they are working on.

The 'Community Big Build' is 1 of the ideas the community has on the go. You set out a plan, a project you want to build throughout the year, it could be your main project or a back burner and you share your progress throughout the year, as simple as that. It's meant to be a low budget affair to see at the end who spent the least on their army however to take part that's not an issue. I'm just jogging alongside as I have already purchased my army over the months and years. It's an interesting place and although in the early stages of development I can see a lot of potential and it having a positive impact on our community. Well worth a look!

Ok that's me for the moment, I hope everyone is finding time for painting and gaming!
Happy Wargaming!!!
Posted by Paulalba at 04:57 19 comments:

I have only 4 command figures to do and they will be ready to base. I've really enjoyed painting them, the different shades for the white and also the grey overall trousers has been fun and not hard to do and I'm looking forward to the next battalion. 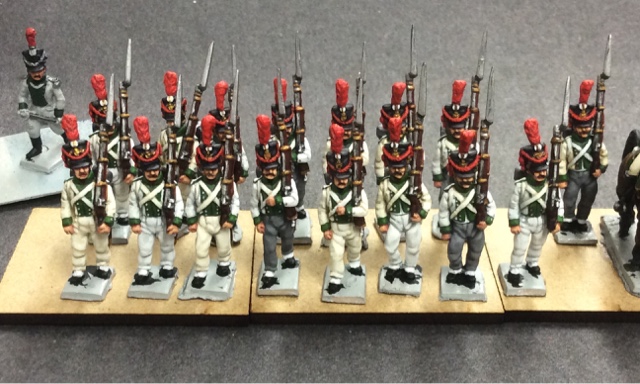 This is the white buttoned companies of Steindel. Once these guys are finished I'll actually have 2 battalions that were in the same brigade! Due to my stupidity I painted 3 battalions with 3 different facing colours that were not brigade together and the stupid thing it's I knew this when I did them!!! So now I have to try and forget all the pretty facing colours and work towards specific brigades (but yellow facings would look so nice).

Anyway that's my progress for the moment, I hope everyone is doing well with their project!

Also if anyone is interested there is a cracking Facebook group called Tabletop Commanders, Its a closed group so you'll have to add yourself to join. It's a really friendly community, very positive for the hobby and full of very helpful people plus they do live paint and chats during the week as well as live gaming that gives you the chance to see how different rule sets play. It's surprising how much it can help you keep focused with painting when your sitting chatting with likeminded folks. Some nights after work I cant be bothered to pick up the brushes and this is when I've found it most helpful! It was started by Kurtus Brown and here is the link: