1st up I would like to say a massive thank you to Burkhard for picking my name out of the hat and sending me his Battle of the Bulge book!!! I'm a huge fan of Burkhard's Prussians and have taken loads of inspiration from his ever growing army and constant flow of info on the units he researches and paints so I'm over the moon to also receive a prize from his give away. If your interested in Naps drop by his blog here: DHC Wargames Blog

So it's been a long while since my last post being stuck mostly at work with plenty of family birthdays and the odd visit of friends and relatives from far flung places. However thankfully I haven't been idle, I've been working on a load of little conversions that I will share with you as soon as they are done and I'm happy with them. I hope everyone is enjoying the change in weather here in the UK and is getting some good gaming plus painting time! We have had 2 shows so far this year: Falkirk that was brilliant and Wappenshaw that was pretty small but good in the new venue and hopefully will grow over the years to match the other 2 big shows in Scotland.
I'm pleased to post that Craig has sent me some more pics and info on his excellent Prussians finishing off his 8th brigade showcase so next from Craig will be from 1 of his other armies . . . And so over to Craig . . .

8 Brigade – Reserve element
At the risk of becoming repetitive I will conclude my illustration of 8 brigade with a view of the reserve element. As previously described the reserve element is composed of the first battalions of each of IR12 and 12 RIR along with IV/14th Silesian landwehr Infantry regiment.

Complete reserve
For the sake of variety I will also include the descriptions and photos of the supporting attachments, Field battery #15 and two squadrons each of 3rd Brandenburg hussars and 3rd Silesian landwehr cavalry regiment. 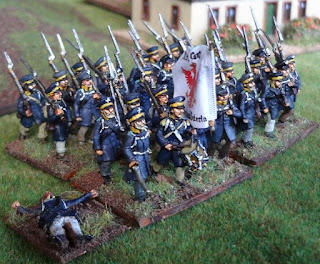 IV/14thSilesian LWIR
The third unit in the main element is IV Bn /14th Silesian LWIR. It wears the standard landwehr uniform of dark blue litewka and schirmutz with facings in the provincial colour which is yellow for Silesia. The shoulder straps are light blue as it is the fourth battalion in the regiment. The battalion is also known as Battalion Gfug – after its commander, Major Gfug. I may have erred in an earlier post by including this unit instead of the II bn of Major Thiele, which has red shoulder straps.

Artillery Battery and limber
The battery attached to 8 brigade is field battery #15. Prussian artillery was organised into regional brigades. These were the Prussian, Brandenburg, and Silesian. FAB #15 is from the Brandenburg brigade and as such has red shoulder straps as the distinguishing feature on the standard kollett. Collars and cuffs are black piped red, turnbacks are red. A covered shako is worn and belts are black. Guns are of brass, and carriages and equipment are in a mid-blue colour. This was my first battery and I went for a lighter colour. I did not repeat this. The crew figures include some Fantassin which provide nice variety to the usual AB poses with chaps pushing against wheels and the like. I also added a Fantassin casualty marker. In the background you will see the limber. In our little group, we agreed early on that limbers should be present in the ratio of one per battery, rather than 1 per gun. The basis for this was that the space occupied by a single limber model more accurately equates to the actual space occupied by a battery on the move. Certainly more than 4 such limbers. I have also only used 4 horse teams to stay within reasonable dimensions. In order to enhance the depiction, I added the gun crew marching alongside the limbered piece. For this I simply used musketeer figures.
Under the General de Brigade rules (2nd edition), a throw of double 1 results in the unit being low on ammunition. This can be restored through resupply by a caisson. Each division is permitted a caisson. AB make a nice French model, but good luck finding a Prussian one anywhere or even a picture of one. In the spirit of 1813, I commandeered a French caisson and gave it a Prussian coat. (from Paul: Craig I feel your pain and I have a dream that Mr Barton or Kawe will do us 1, after all Perry and Calpe now have them for the big boys!). 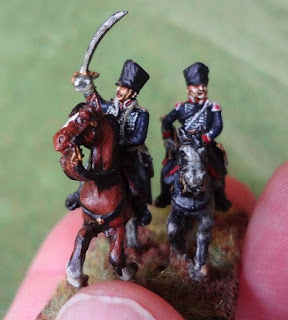 Brandenburg hussars
Given the cracking job that Paul has done with his I am a bit shy to reveal my own hussars. The 1812 regulations called for each Brigade to have a regiment of light cavalry attached. These would typically have been hussars. In 1813 landwehr cavalry regiments were also used in the expansion of the Prussian army. It is interesting to note that there were no reserve cavalry regiments as there were reserve Infantry regiments. 8 brigade has instead of a single hussar regiment, only half a regiment, or 2 squadrons (called somewhat confusingly a “division”) of the 3rd Brandenburg hussars. The balance is composed of a division of landwehr cavalry. The other half of the 3rd hussars are employed in the 7th brigade. I suppose that this was done as a balancing measure in order to spread the more trained and experienced cavalry further to compensate for the anticipated deficiencies in the militia cavalry.
In a complete non-departure from usual Prussian uniforms, the 3rd Brandenburg hussars wear a dark blue dolman, with red facings and white lace and grey overalls with a covered shako. The barrel sash is red with white bands. The officer figure is depicted in a pelisse with white fur. Horse furniture for other ranks is black, with a black sheepskin saddle cloth. The officer saddlecloth is dark blue piped red.
The technique I used for the horses is a little different. I do the undercoat in enamel, and then once dried, go over it again with an oil. Using a tissue I then brush off the excess paint. Once dried I paint the tail, mane, and any other highlights before going onto the saddlery. 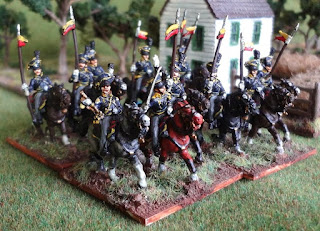 3rd Silesian LWKR
The other half of the 8 brigade cavalry is provided by the 3rd Silesian landwehr cavalry regiment. I was excited to get to paint this unit as it was quite distinctive in that it wore a czapska, rather than the shako or peaked cap. I used AB Austrian uhlans for this although I have since discovered (to my profound disappointment) that the Russian uhlan figure is a better match. The unit wore the Prussian uhlan kollett, in dark blue with plastron front piped yellow. Barrel sash in blue and yellow with grey overalls. 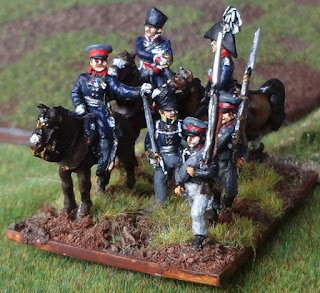 Generalmajor Von Hunerbein
The commander for the 8 brigade was GM von Hunerbein. As per usual practice I have depicted the divisional command stand with three foot figures and three mounted figures. Hunerbein is depicted in the foreground on his horse. To his rear is the Prussian ADC figure and an escorting hussar. The foot figures represent the units under his command: An officer in the Silesian uniform and two rankers in the uniforms of IR12 and 12RIR. The hill in the background is Citadel, and the house is by Timecast painted by our own John Baxter who is quite handy when it comes to terrain.
So what does it all look like together? The trouble with trying to capture it all on the table at one time is that you end up so far away that all detail is lost and you are only peering at clumps and trusting that they are units. However the megalomaniac inside me could not resist having a go, so here it is…

Complete 8 Brigade deployed
This is the whole 8 brigade deployed. To the top right, you can see the vanguard deployed in the village with skirmish elements out. The fusileer battalions (F/IR12, III/12RIR) are to the front, and the landwehr battalion is forming a local reserve.
The main body is formed in the centre, with 3 battalions up (II/IR12, II/12RIR, IV/14th Silesian LWIR) and a local reserve provided by II/14th Silesian LWIR. Don’t take my word for it check for yourself - it’s the shoulder straps that give it away.
The reserve element is in the rear, formed up in a single line (I/IR12, I/14th Silesian LWIR, and I/12RIR). The artillery is covering the flank and has it’s limber to the rear of the gun line. The cavalry is deployed either side of the reserve element. The Hussars are between the battery and the reserve. The landwehr cavalry can be seen on the far side, adjacent to the caisson. Hunerbein is positioned at the centre of the brigade ahead of the reserve element. Now all that is needed is for some Frenchmen to turn up . . . 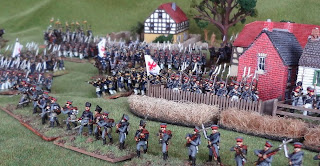 This second picture I have taken from the front right in order to show the vanguard element around the village with the skirmish line deployed. It also provides a different perspective upon the area that a division of 10 battalions with supporting elements occupies and the challenges that a command and control radius of 15-30 cm can provide.

From Paul: Brilliant Craig and looking forward to seeing your other armies!!!
Posted by Paulalba at 01:06 22 comments: