My nephew David and I decided to have a wee game of GdB today at the club. I had been well oiled the night before and was a bit worse for ware so David set up the terrain and chose the scenario. The Prussians had been duffed over in a previous battle (probably last week!!!) and had pulled back setting up a defensive line awaiting the pursuing French.
David's been rattling through some AB guard (a Christmas present from me 2 years ago, and they say I am a slow painter!!) so it gave him the chance to get them on the table.

David was expecting me to set up right across from him but I decided to defend the left corner and try to force his French troops into a narrow funnel of death!

View from behind the allied lines 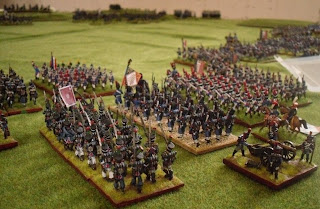 Somehow I managed to not get a good front pic of Davids newly based guard!!! 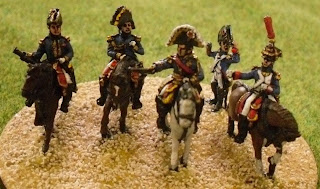 The guy who's doing my loft called off Wednesday leaving me with a free afternoon and knowing David was working through some guard I headed up to give him a hand. I had cleaned up this command group for him a few months ago so it only took a couple of hours to get some colour on them.
I took the Marshal pretty much to a finish and David has added the detail to the rest. Almost done, the wee guy at the back will have a guard fanion added. I think a destroyed cannon would look cool with a Prussian casualty resting against it? 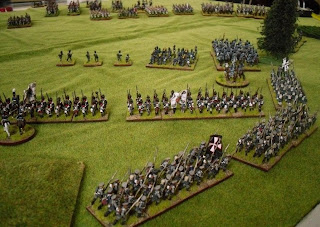 My Prussians shuffling into position to await the French onslaught.
David decided to take on my Prussian dragoons with 2 cuirassier regiments. It could have been a decisive move but with the lack of space they ended up bottled in between his own advancing infantry and the wood!

The Battlefield as the French begin their advance. My 2 cuirassier regiments were up against Davids lights. With me setting up 1st I was sure David would put his cuirassiers up against my own leaving his lights to mop up my dragoons. 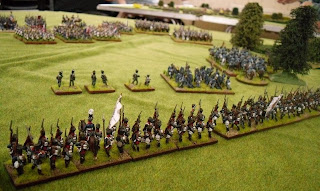 Things are starting to look scary!!! 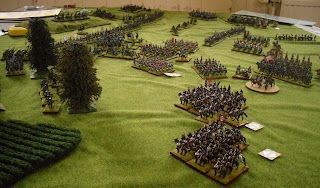 Davids 1st charge with his cuirassiers sends my dragoons into retreat unforming my horse battery and leaving it at the mercy of the advancing French! Thankfully his horses are blown and have to return to his own lines. 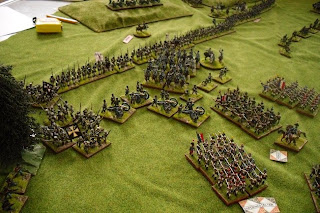 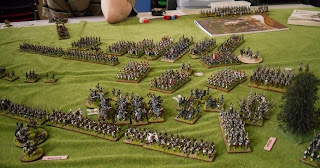 In the end my 2 cuirassier regiments destroyed Davids lights and my infantry were gaining the upper hand after another double 6 with my horse battery and some high dice in melee. We probably made loads of mistakes but it was fun. We seriously need more practice as the gaps between games at times can be months.
Posted by Paulalba at 16:28 23 comments:

I have been having a bit of bother with blogger the past few posts and I can't suss out what I'm doing different so I have decided to change my format a bit.

Last Saturday we had a pretty large game of Naps. It was an interesting affair with ten players in all involved in the game. JP text me during the week to see if I was up for it and by mid week we had DC, David P snr, JP and myself confirmed. Von Hannah added his name to the list late Friday with David P jnr, John M and Jon B confirming on Saturday. At the last minute we had another couple of recruits joined us (Alan and Tam).

JP and David P snr started setting up the French lines (we had decided that the French would be attacking so they were given a large amount of troops for the job).
Far too many if you ask me!!!!

DC appeared near the end of our set up and with Tam's entrance DC somehow managed to pop another French cavalry brigade onto the table complete with horse battery (without us allies noticing! I swear that man has 4 hands!!!).

So it was a big layout, JP and John M had the French right, each with a brigade of infantry and a brigade of cavalry. The French ended up with 8 cavalry regiments to our 3!
It was going to be a tough day for the good guys!

And DC was in the French centre with an infantry brigade.

Tam and David P were on the French left.

Alan being new to Naps and GdB took the all important Prussian right flank with my newly finished East Prussian cuirassiers and West Prussian dragoons.
It is always a tense time when a newly finished unit takes to the field of battle!

Jon B was inside right with a Prussian brigade.

And young David took a Russian brigade in the centre.

It was a good opportunity for me to take stock and see what's lacking from my armies and the main thing that I can see that's needed is cavalry, cavalry and more cavalry.
I'll really have to pull my finger out and get some more painted.

I took a mixed bag of Prussians with 2 guard battalions, my newly finished reserve battalions and a landwehr battalion.

I was pretty chuffed on Saturday as all of the allied figures were from my own collection plus I had a full Minifigs Prussian brigade still in the box.
Some self promotion with my newly finished reserve battalions taking to the field.

Von Hannah made it ten on the day being the last to arrive with his usual health eating plan of pie and cakes from the local deli.
It would be another greasy day for my Russian cuirassiers!

Von Hannah set the ball rolling by sending out the cuirass to try and dent the French lights before they had a chance to start a plan of attack. It was a bold move that almost worked as the French lancers failed to join the fray at 1st but soon their numbers would tell. Maybe a little more caution and some good rolling with his 6 gun horse battery could have steadied the ship? Who am I to talk as my Prussians tried to change their order and ended up taking a major move backwards!!!

At the other end of the table the Prussian cavalry were holding their own against a cuirassier brigade but yet again the superior French quality would shine through.

Pretty soon the French infantry was pressing our brave troops all across the line, I put in a poor showing (although I was diddled out of firing canister at some approaching cavalry!!!!)
my new reserve were easily crushed and only my guard infantry held their own.

In the end it was a devastating victory for the French and the fields of Saxony were soaked with Allied blood. However there will be more battles to come as we fight on to throw the Corsican Ogre from the fatherland!
Posted by Paulalba at 06:58 10 comments:

I kind of rushed to finish these guys off today for a Naps game at the club.

These are my East Prussian cuirassiers from AB

As I mentioned before I wasn't really that happy with them as I was expecting charging cuirassiers and I'm still not too keen on them but they are finished and they had their 1st outing today. I'll post a battle report soon 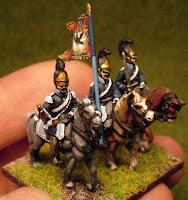 Also as I mentioned before please don't use my saddle colour as a guide as I believe they should be red and for some unknown reason (really weird for me) I chose to paint them with the facing colour. The flag is a cracker, I picked up a set of 15mm flags on ebay from a company called signifer (I think?). The infantry flags were too small for AB figures but the cavalry flags are spot on.

I will tidy up the finer details later (around buttons, some of the horses eyes etc) but for now they have a single coat of varnish applied, they are grassed and I am sure they will grow on me.
I should add that the AB Prussian kurassiers didn't come with a standard so I clipped off a sword and drilled out the hand before inserting a straightened paper clip. I then made a new hand and attachment from green stuff to hold the standard. I have since found out that there is a standard bearer available and have 1 in my newest regiment!!! There was definitely none offered at Fighting 15's when I ordered them yet there is now!?
Posted by Paulalba at 09:40 17 comments:

I managed to finish my 1st 2 battalions of the Prussian 6th reserve.

The 1st battalion are West Prussians with crimson facing colour.

To be honest the flag was a big mistake as it is crap looking but in the end I had to include it as 1 of the figures guns broke and I didn't have a spare so he is repaired and the gun is resting against the stiffened flag.

In the end they don't look too bad especially as I knocked them together really fast, the main thing is they are finished and ready to take the field!

I feel much better about my Silesian battalion as their lemon yellow facings make them stand out much more.

Also I lightened the grey of their uniforms much more than the West Prussians and it does help lift them. 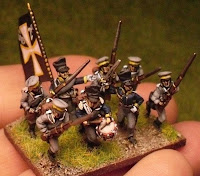 Again the flag is poor but as I had included 1 in the 1st battalion I felt I had to give them 1 too. These figures would definately look better without a flag or with a flag from their parent regiment. I'll maybe switch them in the future?
So 2 down and 1 to go but I think it will be a long time in coming as I have a good few other figures I would like to do 1st!
Posted by Paulalba at 09:09 18 comments: