I've meant to do a post for a couple of weeks now to show my progress however I decided to wait until I finished this current crop of figures. As part of a small painting challenge run by the Miniature Modelling Mayhem group on facebook I have used my time to tick off a few little projects I should have finished a long time ago. Watching everyone progress through their projects on the chats plus posting on the group has spurred me on to putting in a bit more effort and now that it has been expanded till the end of May I'll be pushing on with a couple of other little long neglected half finished projects.

My Silesian landwehr only 2 battalions short of completion!

So I have just finished this battalion up. It is the 1st battalion of 6th Silesian landwehr regiment. If you have followed my blog you will have seen that I was lucky enough to win Dan Dunbar's commission painting comp and I got Dan to do a number of landwehr figures for me. I have used Dan's painting as a basecoat and added a few extra shades to the troops plus added in around 8 of my own from scratch to complete the battalion. 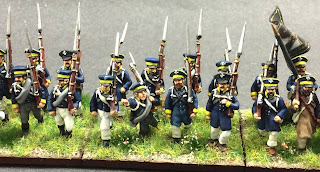 To give a variety from the 4th Silesian regiment I have added in a number of reserve figures in short coats as the 6th was shown to have it in 1815.

I used various Vallejo and Foundry blues plus the odd grey mixed in to try and get plenty of different blue tones to the coats and caps.

These are my Silesian landwehr battalions so far. I'm roughly doing them for the Katzbach OOB.

Also I have added some Leib regiment musketeer skirmishers for future games, some 3rd rank to add to the volunteer jager. 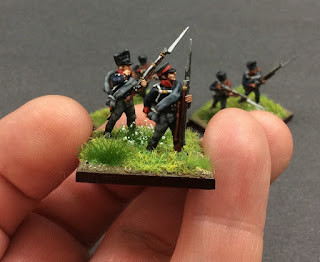 I have been messing about with greys, blue greys to get different shades to the bedrolls, trousers etc. 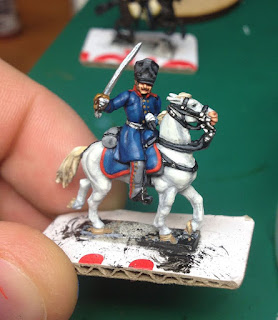 Another little long neglected project: I started this 1 off maybe 2-3 years ago then decided I needed  to crack on with more battalions. This is Crazy Platen from the Mockern 1813 battle, or at least my representation of him. He is a Russian dragoon with a Prussian artillery gunners head pinned in place. 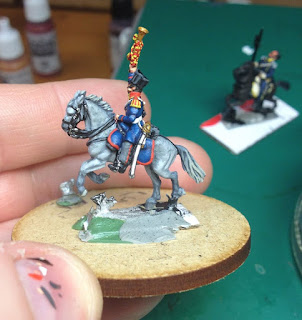 And this is his trumpeter converted from a Prussian dragoon trooper with his hand drilled and a French dragoon trumpet plus cord added. 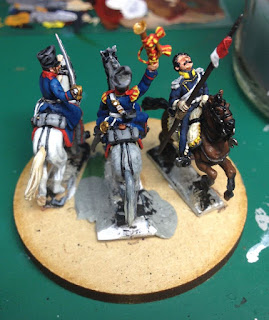 Still a work in progress but starting to take shape, The uhlan looks to be from the 7th in the picture and I have painted him that way as I stupidly forgot that when I started the project way back it was pointed out to me that the 8th were the uhlans in the OOB. Anyway it's to late to change him and he fits in with the picture. 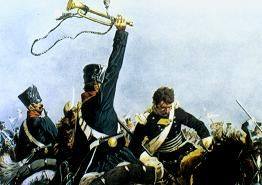 This is the picture my command is based on. I know it isn't exact but it will do for me. The story if you haven't heard it is that during the battle of Mockern the officer Crazy Platen of the Lithuanian dragoons was in combat with a Polish uhlan (I think both men received wounds) then Platen's trumpeter weighed in finishing the poor uhlan by using his trumpet as a weapon.

So that's me for the moment. Hopefully I'll have more progress on the command base plus East Prussian grenadiers soon. If your interested in joining the painting challenge or checking out the MMM group it's a very friendly little group with members from around the world. The paint up (chatting online with other wargamers/painters through google hangouts) are mostly offline so are pretty chilled out and it's amazing the amount of stuff you get through when taking part. I've found that cleaning up figures for painting and rattling through the troops is easy when your having a blether at the same time. It's a closed group so everything you post is within the group. You can find the group in facebook at Miniature Modelling Mayhem.

I should have had this 1 posted up a lot sooner. This was the other game on the go on Easter Sunday and it was also the game I was involved in. Not as colourful looking as the previous game and pretty 1 sided with us (the French) having it almost all our own way. However each game is a learning experience and it was again great to see the troops on the table. I took a lot of pics during our game and have deleted a good number so the post isn't to picture heavy.

Again I included a video for the folks who enjoy that kinda thing and the still pics are below: 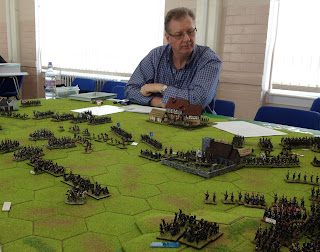 Rod was 1 of the Allied commanders on the day seen here scanning the battlefield. Also Rod brought along his Westphalian army for the 1812 campaign to show me. It was absolutely stunning complete with engineer, bridging units plus ambulance. I only had a little while at the end of the game to look through it as I had so much stuff to put away myself. I'll make a point of getting a load of photo's of them at some point in the future. 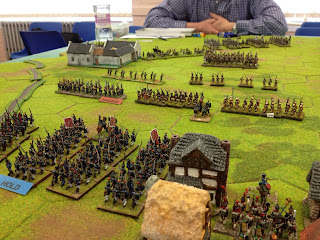 Rod made a dramatic thrust with his Russian cavalry at the French left flank early on taking John by surprise. I guess he decided that attack was the best form of defence?

He threw his Russian hussar regiment at the advancing French battalions. I would have been cautious and put my troops into square as soon as he got within a threatening distance, John however bravely decided to sand his ground. 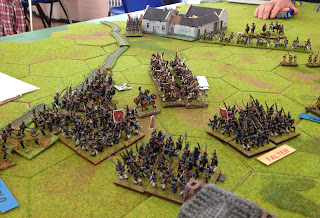 Luckily for Rod, John's dice for shooting was pretty low and the hussars actually done really well causing a good bit of confusion amongst the French, however with no real support their exciting bravery didn't amount to much in the end returning to behind their own lines a bit weaker. 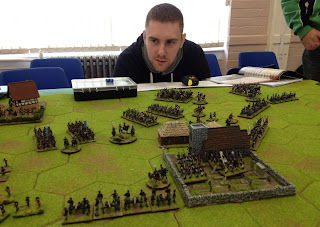 My nephew David checking out our battle lines, we by chance were right across from each other after drawing lots to see what table we would be on and what nation we would be in charge of. 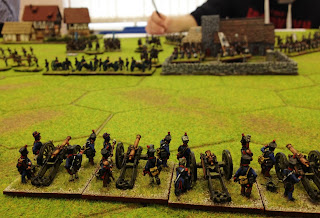 My job for the day was to pin David and Rod in the centre and exploit any weakness, if any should arise. 1 of my 2 batteries that caused quite a lot of damaged to the Prussian lines. 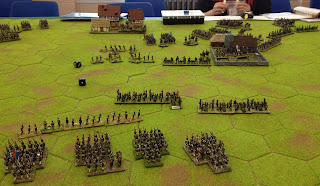 Looks kinda quiet at the start, eventually I would be up against both Prussians and Russians. 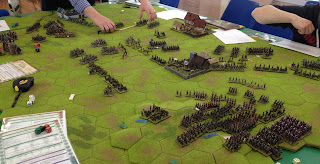 The table starting to take shape. You can see the French guard massed for an assault down the right. After the game we had a chat about it and the overall opinion was the best that the Allies could hope for was a draw with a loss being the most likely if the French side used their troops well. 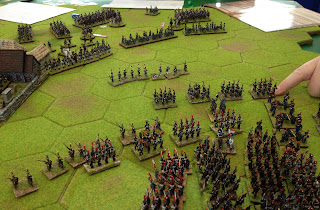 Our right flank was to be the killer blow with the guard cavalry and infantry making a push at the Allied left in an aim to swing round and rolling them up. 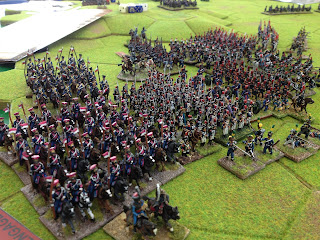 This is what its all about! we sitting for hours of an evening painting our wee men!! Stunning figures on display on both tables!!! I don't know who supplied the majority of the French but the Polish uhlans at the rear left are young Davids. 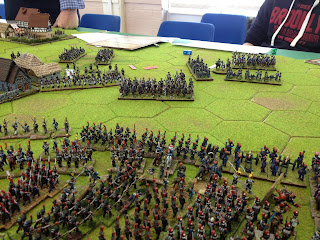 Unfortunately my Prussians would be on the receiving end of the main French advance . . . 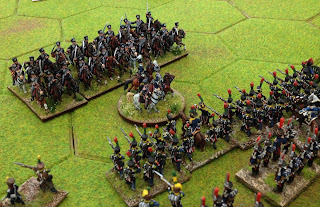 My Leib hussars putting up a brave defence against overwhelming odds. 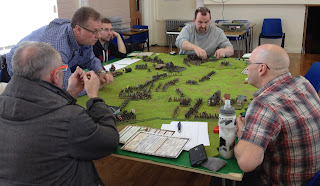 The gang in action debating orders at this point I think. The old chestnut of if you put your brigade on orders to assault an objective or an enemy brigade and another enemy brigade moves in front of that objective are you entitled to assault that new threat or do you have to change your order to do so? If you have ever played Russians you will know that changing your orders isn't as easy as it sounds especially if your CnC is not close by! 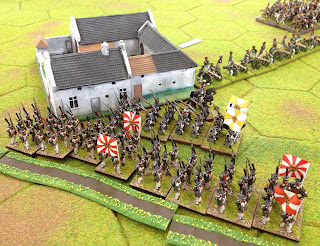 Rod begins to bring up Russian grenadiers into the battle (It's nice to see these guys getting a run out as they were painted so long ago and very rarely see any action). As the French guard smashed through the Allied left flank Rod made a play for 1 of the towns held by us and for a while it was looking as though he may just do it, however like most battles the offensive ran out of steam from not having enough troops to execute and reinforce the assault. 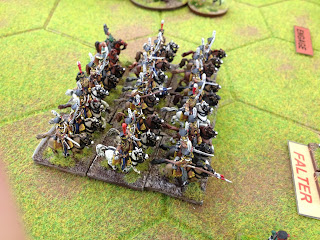 The only Allied cavalry on the right. Some very nice Ahtyrka hussars. I have a couple of regiments of Russian hussars to paint up myself however as always the problem is time. I could have done with starting my collection 20 years ago! 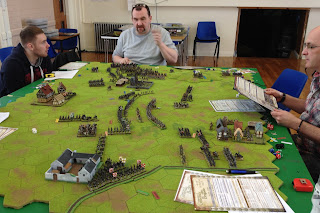 Our table mid way through the game looking pretty nice if I don't say so myself. 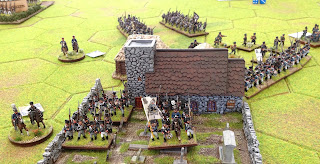 This has to be 1 of the only times my Prussian guard have been in action as Prussian guard. In the end the French right battered through the Allied left and took the remaining town held by my Pavlov grenadiers and things were looking very good for Napoleon in Saxony once again. 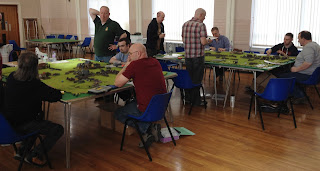 The 2 tables on the day: Nice to see such a good turn out, the Falkirk lads put on a good gaming experience!

It's not so great being on either side of a 1 sided game (I know many who would disagree) however being part of the day was a lot of fun and both games gave a great learning experience. Obviously for myself seeing my own troops (plus terrain) on the tables was a great inspiration as I was able to see the areas in my collection where I have gaps. It's tough as with a limited time to paint you have to make the decision which gaps to fill 1st! I would very much like to push on with my Saxons for 1812-1813 however I can see how close I am to ticking off some Prussian OOB's and then you have the Russians, French, Bavarians, Austrians and Poles. Ahh it's all good clean fun . . .

I hope you have enjoyed the battles and I'll try and get another post of painted troops up soon.
Happy Wargaming!!!
Posted by Paulalba at 05:04 28 comments: