A Merry Christmas and a Happy New Year to everyone!!!
I know I am a little late on posting for Christmas, I planned to get this post done before the big day however I just ran out of time. This will be my last post before New Year as I will be back at work until hogmanay so I wish everyone a wonderful New Year and thanks to everyone who took the time to look over or post on my wee blog. As usual I planned to post many more finished units however I did manage at least 1 post a month so that was a good achievement for me!

So I finish off the year with the newest battalion to enter my collection. the 1st battalion of my East Prussian landwehr. This was 1 of the battalions I picked up from Darren a few months back and since Darren very kindly sent me up the blue he used as well as some AB Prussian guns (Darren you are a star!!!) I managed to get them finished off. 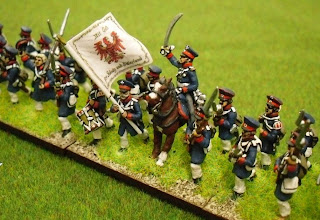 I added the mounted officer into the mix plus a new flag man with flag from GMB (nice flags). I did a little touching up to the caps adding the red pipping and painting them blue. 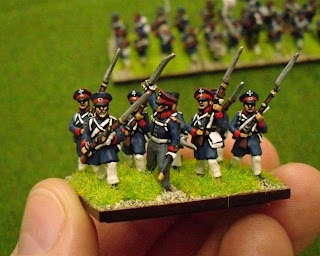 I didn't add any highlights to the coats or faces as they were light enough. I had planned to paint the gun slings red/brown however as they are militia I figured it wasn't so important. 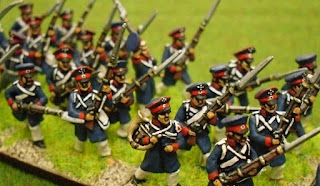 I also painted the gun metalwork to turn it to my own style. Great little figures the AB landwehr figures and all in all I am very happy with them. 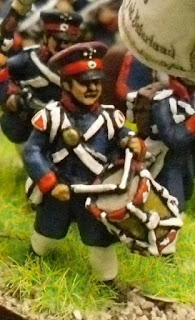 So my usual basing with static grass to finish off and they are ready to fight the evil French hordes that for so long have occupied their homeland. 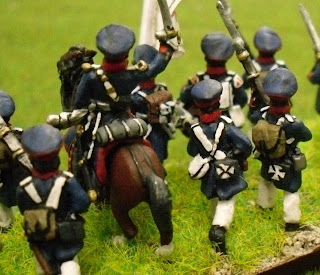 This was a nice little touch Darren added to the figures, little landwher crosses on many of the ammo boxes, Sweet!

So once again I would like to wish everyone a Happy New Year and hopefully I'll see you in 2013. I have enjoyed reading over everyone's blogs and exchanging emails with everyone. Von B keep going with the SYW so you can get them off your workbench and get back into your Naps!
Posted by Paulalba at 03:39 25 comments:

Well it has been a long while since I last posted however I haven't been idle. 1st I would like to say a huge thanks to Rosbif, Sgt Steiner and Der Fieldmarschall for nominating me for the Leibster award, I have definitely missed the boat on it so all I can say is sorry and again thanks a million!!!

I've been re-basing and adding to the Prussians I bought from Darren. I have been concentrating on the 1st Silesian regiment and I have finally finished the fusiler battalion.

Darren had done them as West Prussian fusilers but since I have them already I repainted their facings and added in a few figures. 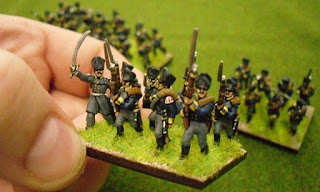 I added the buttons where I could and highlighted the shakos and was able to highlight the trousers and blue (not that you an really see it!). The sword knots are Darren's, nice touch! 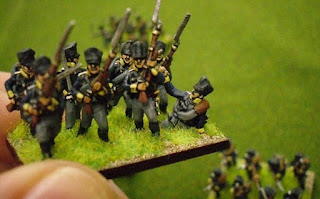 All in all I'm really pleased with them and here they are with their regimental buddies that are very close to being finished too. I just have to decide what I'm doing with the volunteer jagers next.

I was going to keep these guys for another post but I'm really excited about them so thought I would show them in their WIP state.

They are a battalion of East Prussian landwehr painted by Darren and re-based by me. I have been painting the caps blue and adding the red pipping lately. 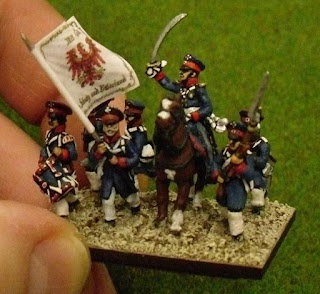 The flag man has been changed and drilled with a paper clip flag pole and GMB flag added. The officer was separate from the battalion originally so I gave him a new mount and added him to make this the first battalion of 4. Thanks Darren for the great figures. I'll be finishing them off soon as Darren is sending me up the blue he used on them

I would just like to finish by saying how sorry my wife and I were to hear of the tragic events that happened over in America in the past few days and our hearts go out to the family and friends of all the children and adults who were so cruelly taken from them. I cannot begin to imagine how the families must be feeling at this time and we wish them all our very best.
Posted by Paulalba at 07:58 13 comments: