Craig has sent more pics and info from his Prussian collection, everything is in the text so enjoy:
8 Brigade Main
The main fighting element of 8 brigade, as in any Prussian brigade post-1813 was formed from the musketeer battalions of it’s constituent elements, less any units held for the reserve element. In 8 brigade, these were drawn from the Brandenburg regiment (IR12), 12 reserve infantry regiment (12 RIR), and the 14th Silesian landwehr infantry regiment. I painted these figures between 2004 and 2005. They are AB, with one or two Fantassin command figures which I found interesting, and a means of providing some additional variety. 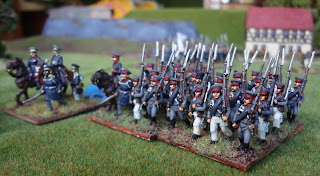 II/IR12
The first unit is the II battalion/ IR12 – the Brandenburg regiment. This battalion was originally formed as the 2nd reserve musketeer battalion of the elite Lieb regiment. As such, the membership of this regiment had originally been in the Lieb regiment, before being furloughed (sent on leave) to keep the Prussian Army below the 40,000 cap required under the 1807 Treaty of Tilsit. This practice, the krumper system, adopted by the Prussians in 1808 enabled them to maintain a large pool of trained men, who mobilised when Prussia declared against Napoleon in 1813. This,along with the creation of the landwehr, facilitated the rapid expansion of the Prussian Army. The cadre (officers, NCOs, musicians) wore the regulation uniform of the Lieb regiment: Dark blue kollett with red turnbacks, poppy red collars and cuffs with red shoulder straps. In each of my reserve battalions, I depict the cadre in the command stand, and one figure per stand (1 in 8 figs) dressed in the uniform of the stamm (parent) regiment. You can see these in the photos, usually in the rear rank, on the right hand file. In this particular battalion, around 500 of the men were also dressed in the regulation uniform of the Lieb Regiment with red shoulder straps. The remainder wore the Brandenburg version of the ersatz (substitute) uniform – short black jacket with red patches on the collar, over white or grey trousers, and either shako or a grey peaked cap with poppy red band. This battalion saw action in the Spring campaign at Bautzen , and as part of Blucher’s Army of Silesia in the Autumn campaign. As it was originally a reserve Regiment, I have placed the figures in the ersatz uniform in the front rank. You can see the figures in the regulation uniform in the rear ranks. You can see the Fantassin officer on foot in the front rank of the command stand. 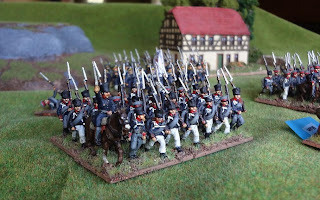 Photo of II/ IR12 - focus on second rank
My painting technique at this stage was still a layered block style, although I am doing a touch of white on the faces as a highlight. For the white trousers I have dry-brushed heavily with off-white over neutral grey. I used the same white for belts and haversacks in places. The rolled greatcoat is done with a dark grey over the black (sprayed) undercoat. The varnish I was using then was with an estapol furniture varnish, which does yellow a little over time if applied too thickly. 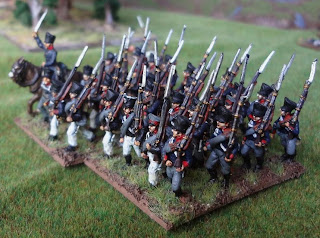 Photo II /12 RIR
The next unit is II battalion, 12 reserve infantry regiment. This unit started life as 5th reserve battalion of the Lieb regiment. Again, cadre (officers, NCOs, musicians) wore the uniforms of the Lieb regiment with red shoulder straps. As described previously I depict the cadre in the command stand and with one figure per stand (1 in 8 figs) dressed in the uniform of the stamm (parent) regiment. You can see these in the photos usually in the rear rank, on the right hand file. Or you may be able to make out the shako in the rear. Rank and file of this unit wore the standard ersatz (substitute) uniform – short grey jacket with red patches on the collar over white or grey trousers and either shako or a grey peaked cap with poppy red band. Equipment is the linen or cotton haversack and/or knapsack with rolled greatcoat over the shoulder. The reserve units were not able to be equipped with swords because of shortages. They did however receive the sword wrist straps which had the coloured knot which signified the company the owner belonged to. They were worn from the cross-belts or haversack strap. The AB figures have these depicted, and although I did not initially I now paint this detail where it is visible. This battalion also saw action in the spring campaign at Bautzen. I’ve used an officer figure in litewka with this battalion for variety.
As these were among the first battalions I had painted I was still working out some standards. Normally I only include mounted officer figures in the 1st battalions of each regiment but at this stage I was still experimenting and I was doing it everywhere. As there were non official colours issued to these regiments I have not depicted them with such. I have seen that others have provided them with a flag and the Calpe range depicts them with such: http://www.calpeminiatures.co.uk/sub-veterans/prussian_reserve_infantry.html#2 And if Calpe can allow it I certainly can.

Given their status it is conceivable that they like the landwehr units who also did not have official colours, would have used an unofficial colour. Given the functional aspects of colours in line units during the period (rally point, marker from which to dress the line etc) and the aesthetic appeal of doing so I will provide them with a colour in the near future.
I also do casualty markers. As mentioned elsewhere, for each battalion painted I provide a casualty marker in the appropriate uniform. It’s presence adjacent to a unit means that the unit has taken casualties and the casualty sheet should be checked before making calculations that include unit strength as a factor. They also make for a nice ornament on the table. 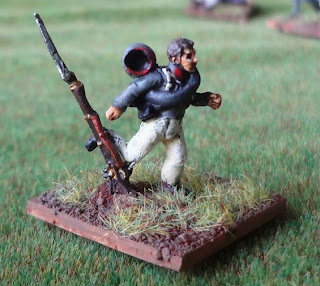 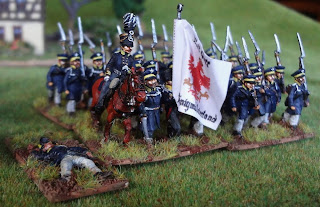 I/ 14 Silesian Landwehr
The third unit in the main element is Ist battalion /14th Silesian LWIR. It wears the standard landwehr uniform of dark blue litewka (long jacket) and schmirtze (peaked cap) with facings in the provincial colour, which is yellow for Silesia . The equipment belts are black leather, and the haversacks and knapsacks are a mix of linen and whatever they could find. Axes are also carried in lieu of swords. The shoulder straps are white as it is the first battalion in the regiment. For that reason I have also included a mounted figure. The figures are all AB. The battalion is also known as battalion Kempsky – after its commander, Major Kempsky. 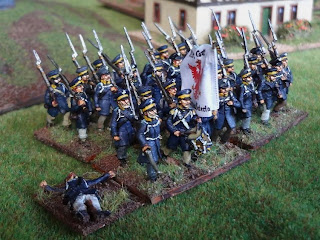 The fourth unit is IV battalion /14th Silesian LWIR. This landwehr unit is distinguished by its sky blue shoulder straps which denote it as the fourth battalion in the regiment. The battalion is also known as battalion Gfug – after its commander, Major Gfug. As these are militia units I have tried to vary the appearance somewhat by using differing shades of dark blue on caps and jackets and different coloured trousers. The AB landwehr figures have quite a nice variety to them, with clearly different trouser types, baggage and even footwear. Some of the figures are in clogs and some are barefoot. Where possible I have tried to make these troops look makeshift rather than standard issue. 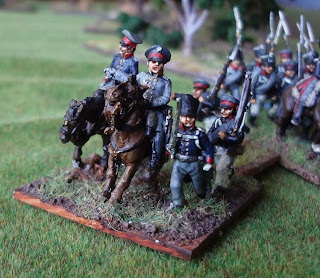 Oberstleutenant von Borcke was the commanding officer of IR12, and as such the most senior regimental commander under von Hunerbein. It makes sense to have him command the main element of the brigade/division. He is in a grey leibfrock and field cap, typical of senior Prussian officers although I have tended towards a darker grey for later staff figures. The figures with him represent a mix of regimental officers and a soldier from the units in the main element. As it is a brigade level command I have gone for two mounted figures, and two on foot.
As the skirmishing was done by the light troops in the vanguard element, there were no dedicated light troops present in the main element. Prussian line troops were able to deploy the third rank in order to perform these tasks as required but under the rules we play (GdB) they do not do so if there are dedicated light troops available in the brigade. As there are none in the main element, I am under the latest edition of GdB able to deploy a stand (8 figures) of each battalion as second-rate skirmishers. The rules actually state I can deploy half of one stand (4 figures) but I think that under-represents one third of a battalion. If the purpose was to degrade the skirmishing capability of line troops then that would be reflected in the modifiers rather than the quantity available. I have not yet gone to the effort of producing some duplicate skirmishing bases but I shall when I have less pressing projects to attend to.
Anyway I hope you enjoy.
Cheers Craig
Posted by Paulalba at 16:10 8 comments:

Carrying on from the AB figures I picked up from Darren at the end of last year here is a battalion of East Prussian fusiliers from the 1st regiment. I've wanted to do some East Prussians for a good while now as so many wargames scenarios (as did so many real battles) have them in the OOB. They fought in Russia with Napoleon, through the war of liberation in 1813 right into 1814 (I believe they were back home guarding the frontier during the 1815 campaign) so you really need to have a good amount of them in your late Prussian army. 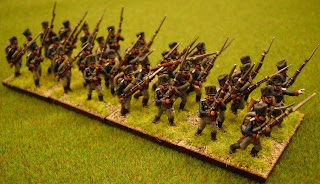 I have the 2 line battalions under way on my work bench however I have jumped over to cavalry and I'm working my way through a Brandenburg hussar regiment at the moment (8 varnished 16 to go). 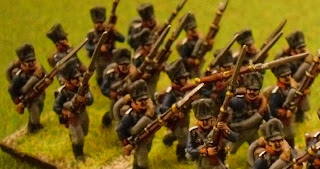 It took a good bit of painting to change them to my own older style. I highlighted some of the faces and blackened the leather work. Gun barrels were painted as were all the facings in the East Prussian terracotta/orange. As usual the breeches, bedrolls and uniforms were highlighted however my pics never seem to show them up well. 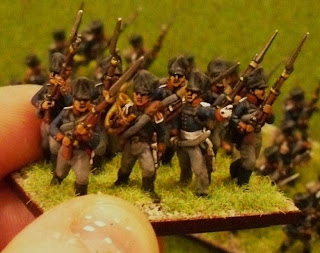 Some of the figures look a little rough as is to be expected when your over painting figures however I think they came out pretty well considering. 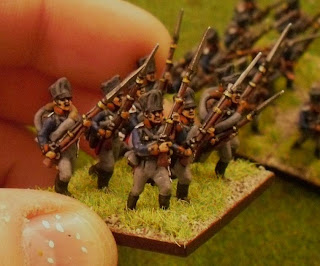 So that's 1 more battalion joining the fight to free the fatherland.
Right, back to those pesky hussars!

I'm going through all my old kit at the moment. Over the past 20+ years I have amassed so much stuff that I can hardly move so I am thinning it down to the stuff I feel that I would definitely like to paint, use and keep. My AB and OG Naps, 10mm ACW, 15mm Xyston ancients, FOW and Wings of War as well as 28mm zombies I will be keeping. The rest will be making their way to bring and buys and ebay and sadly some have already made it to the trash :0(
Posted by Paulalba at 15:54 16 comments: