Well it has been a loooong while since I started them but finally I have finished my 1st battalion of the Pavlov grenadiers. Sorry for the quality of the pictures as I am still taking pictures under my painting lamp and dull house lights (energy savers aye!!!).

Not much to say as I have already posted the figures pretty much finished in my last post. 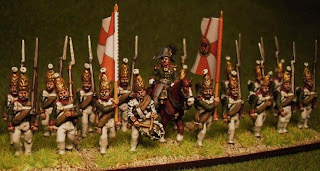 Every army of the period has a unit we all know and want to paint. The French have plenty (Dutch lancers, Polish lancers and pretty much all of the guard) the Prussians have the Lieb Hussars, the Brits the 95th rifles and what Russian army of the Napoleonic period is complete without the Pavlov grenadiers? 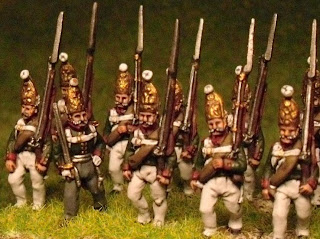 I don't think they came out as well as the other grenadiers I completed however I am still very happy with them. 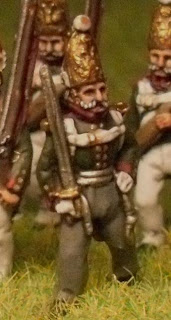 I wasn't so happy with my converted officer at 1st however now that he is painted up he looks fine, his tash came out very well. 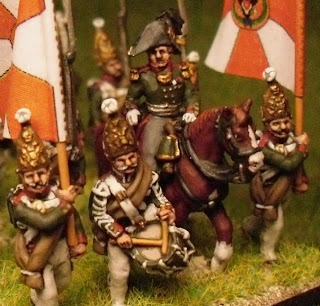 I managed to avoid the 1812 kiwer (shako) in the ranks of my Pavlovs.My shading is a little heavy in areas however I didn't really have much time to spend on them so I did what I could an hour at a time.

I used the GW foundation red (like a brick red) on the rear of the mitre so as to differentiate it from the red of the collar etc. 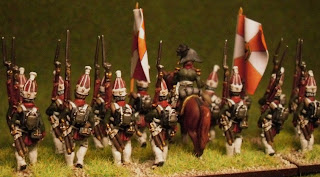 The highlight of a lighter gold was totally pointless on the badges at the back of the mitre and with the 2nd battalion I will just leave them the base gold as the AP gives it enough shade.

Thanks for looking!
Posted by Paulalba at 13:10 22 comments:

Still slow progress due to lack of time from work but I am almost there with my 1st battlion of Pavlov grenadiers and hopefully should have them finished in a day or 2?

Finished painting and varnishing the figures last night, based them up and sanded them this morning. I'll get the graveyard earth on the bases once the 2nd coat of PVA drys. 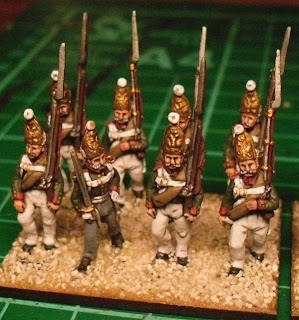 Wasn't sure about how to do all the mustaches as all the pics I have seen show the Pavlovs with grey. I think the best way to do them is to paint each pose with different coloured hair and mustache as they will be seperated on the bases giving a unique layout. The Officer here has a head swap as I fancied at least 1 officer with mitre. 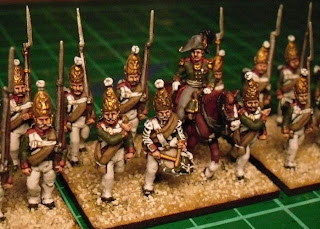 I have no idea of the pompom colours for the drummers if they were red or white so I just left them white (if you know better let me know!). 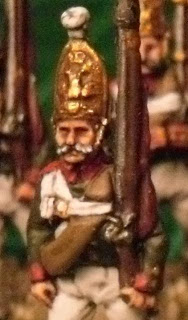 I mentioned before that I had noticed the left over tassles on the cross belt of some of the figures. This is the 1st figure I did and you can see the tassles next to the buckle left over from the regular grenadier figure of the same pose. I also noticed when I was ready to paint that there was 1 more figure pose that had the tassles remaining too (more slashing!). 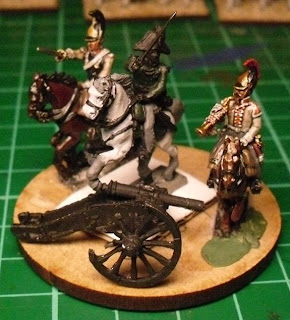 Another kick started command stand. I converted this officer ages ago and asked for a wee bit of advice with him. He has had a green stuff cuirass and has had it stripped off and now is a regular commander again. 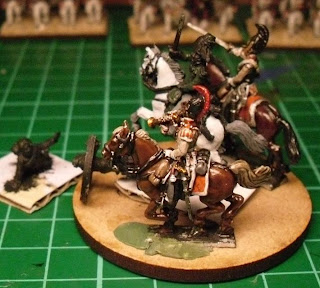 He is going to be jumping over the French gun with a stranded casualty in his way.
Posted by Paulalba at 09:13 23 comments: