Another quick post, with the Falkirk lads hoping to put on another refight of Waterloo this year I used the excitement to push on with a number of almost completed Prussian items that I've had sitting around (even if some in reality were not present at Waterloo, I hoped they could maybe slip in as substitutes in some form or another).

1st I managed to finish off a Silesian grenadier battalion that ground to a halt sometime last year. A bit of fatigue set in after painting a few Prussian items in a row. 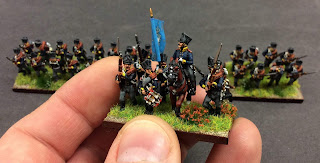 Finishing this grenadier battalion ties up the 1st and 2nd silesian regiments together for me with only volunteer jager and maybe a third rank group of skirmishers to be added. 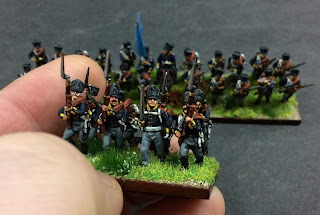 I completed my 2nd silesian regiment with Minifigs 2nd generation figures many moons ago and the 1st regiment with AB figures so it's good to get the grenadiers ticked off as well. 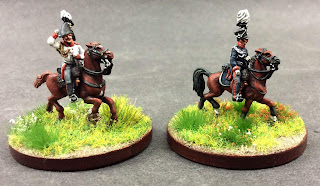 I have also been clearing out my Prussian command figures. I did a couple of Prussian adjutants. Should come in handy at some point. 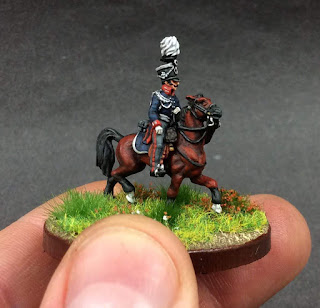 This wee guy is probably my favourite as the horse came out nice.  The Vallejo hull red and Cavalry brown combine well to make horse colours straight forward. Made this 1 a bay, at least I think that's what it is. 😆 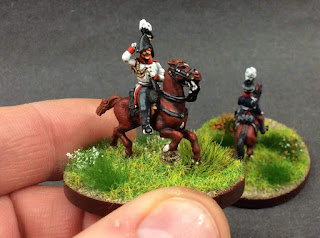 Happy how the cavalry adjutant came out too, probably more for the 1813 period but what does it matter.

I've also been working on Yorck plus a Blucher for 1813 and another couple of commands. However I just recently got the message that the Waterloo game may not actually go ahead so I've slipped off the Prussian wave again.

Anyway, I hope everyone is doing well and making good progress with their projects.  Thanks very much for all the kind, encouraging comments I've received online.

All the best
Happy Wargaming!!!

Sorry for the lack of updates, seems to be the common line at the top of each new post and this 1 is no different.

I finally managed to get the 3rd and 4th battalions finished for the 4th Silesian landwehr regiment.

They are a mix of landwehr and reserves figures from AB. I got the idea while reading Dr Stephen Summerfield book on landwehr. The 4th seemed to have moved over to a short coat in 1815. Just to give variation in the sea of traffic wardens I thought it would be a good idea to mix the reserve troops through as a transition in clothing, something like that. 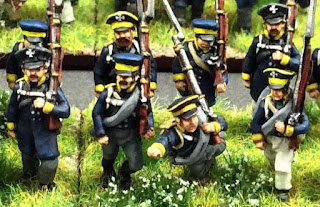 I also popped in the odd casualty and character to make up the numbers. 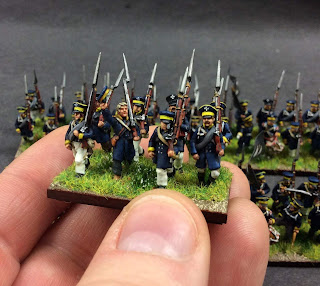 As usual I try to put a character on each base, a chap cheering, a spare drummer etc as I feel it adds, well more character to the unit. 🤗

The figures were ordered from fighting 15's a good while ago. The reserve figures I have to say were disappointing. On a few of the poses there were flaws at the point the bayonets met the musket or on the inner bayonet. Also some of the legs were very fragile at the knees plus the odd problem with faces.  Thankfully I was able to hand around 40 in all to Ian of fighting 15's at Falkirk so he could see the specific poses himself. Also some of the landwehr figures seemed to have excess metal on the left of their faces, I tried to make this into a bandage where possible. I'm sure the moulds have been sorted out now that the problem was pointed out. It was reassuring to hear from Ian of fighting 15's that he appreciates people making him aware of any problems so they can be fixed and as he said, at the price the customer should get them in perfect condition. Also saved me sending them back in the post. In the past I have usually just given any problem figures to buddies who don't mind miscast figures or broken bayonets before painting. 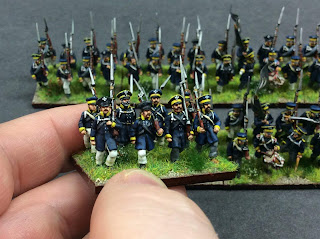 The AB landwehr figures are some of the best in the range for variety and are nice to paint, almost to good to be landwehr. 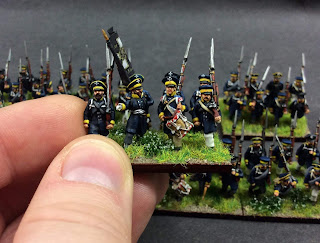 I position any with weak bayonets in the centre of groups or near the flag like the chap with beard on the left.

So that's the 4th and 6th Silesian regiments of landwehr finished for my katzbach order of battle and I'm Glad to have them done!

I've been feeling recently that I'm drifting away from blogging, it's not that I don't really enjoy reading posts, there are thousands I want to read and that's the problem. I find it hard to keep track. I can't paint while reading or typing and it's just so much easier to listen while cleaning up troops or basing than searching online. I find it increasingly difficult to force myself to put a blog post together compared to shooting a quick video. I'll keep posting and hopefully the blogger app will be improved for Ipad?

Anyway I've got a few more finished items to post up.

Happy Wargaming
all the best!