Actually struggling a bit tonight with blogger, can't seem to get the text to stay where it's meant to go!!! a REAL PISSER!!!! Anyway life is a little hectic work etc. . .

Figure painting wise I have been trying to fit in an hour here and there a I have surprisingly been making a good bit of progress (although I have to admit to cutting some corners to get more done). I had a couple of Old Glory reserve battalions pretty much cleaned up and ready to go so I fired the black undercoat on and got stuck in. 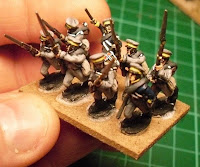 I managed to rattle through 2 battalions in just over a week so pretty good going and to me they look fine for the gaming table. Both battalions are from the 6th reserve regiment that have the turn backs to their coats (that Old Glory have included in their figures ). These are the Silesian's.

And this is the 1st of 2 West Prussian reserve battalions (the 2nd will be in all blue). The fancy pants had to be different! No matter they should paint up fine as it is all blue.
I love painting all grey uniforms, a coat of codex grey and a couple of lighter shades and your done! 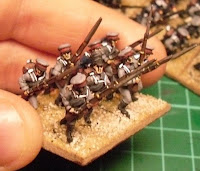 I didn't even bother with the buttons on the reservists. The only figures I detailed were the line officers, NCO's and drummers to help them stand out. So some sand on the bases finish up the painting and varnishing and they are ready for action! I have decided to add flags to my reserve battalions, I know they didn't officially have any but I am thinking that maybe some kind ladies from their district knocked some together for them? Works for me and it looks better on the table. 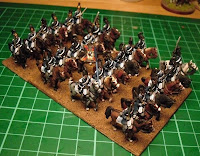 Another unit I have been working on my East Prussian cuirassiers from AB. I had put them away in a dark corner for a very long time. 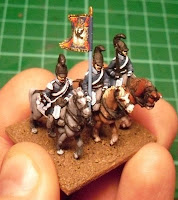 I am sorry to say I am not so keen on these guys and that is why it has take me so long to paint them. 1st up I was expecting them to be charging (maybe I've been spoiled with the AB charging Russians) and 2nd they are almost identical to the BH Prussian cuirassiers.

Anyway they are almost done now. I had to convert a trooper to a flag man as I didn't see the option when ordering them. Anyone reading this who is going to do the same regiment please don't follow my light blue saddle covers, for some reason I didn't like the look of red and unusually for me made a decision to go with the facing colour. I know it is wrong but for me I decided the light blue looked better. 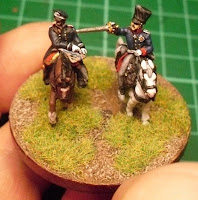 I actually managed to finish up a little command base in a couple of hours. An old landwher officer (as ray pointed out) being stabbed in the arm by a mounted General in full dress. He isn't really it's just a bad angle, if there was a large pole in the background I would most probably have managed to have it coming out of 1 of their heads!

When I ordered the BH Prussian command pack I got 12 of this officer figure so I have been doing what I can to make him look different. This time I added the Guard Star, Iron Cross and saddle cloth with green stuff.
Posted by Paulalba at 15:58 15 comments:

Saturday past we managed to rustle up six players for another game of Naps. I've been reading the John Gill book 'With Eagles to Glory' recently and had planned an 1809 game with Robert bringing along his Austrians and Wurtembergers. As usual life had other plans and we ended up with Russians against French. I didn't bring any troops with me so thankfully Robert had plenty of Russians to go around! A sad little side note: The Motherwell Wargames Club has closed its doors. It was held on a Tuesday night and my brother David, nephew David and myself started wargaming there. Unfortunately being a week night made attendance very difficult and over time the numbers dropped. Hopefully some of the guys will make it down to Carluke the odd Saturday.

In the foreground part of my little railway village I knocked together for the day and newly donated bridge. JP produced an old snooker table cloth and out came his blue chalk for water (I prefer the GW mats as the emerald green baize messes with my camera shots but what the heck).


So on the Russian side (continuing to clear the dastardly French from brother German soil) was Robert T, Jon B and myself and on the side of the Evil French aggressors JP, David P and David P jnr.

So we went our separate ways to discuss our plans for the day and it was decided that Robert would refuse the flank (whatever that would mean?) and would try and hold off whatever came at him with a reduced force while Jon B and myself made a large push in the centre and right of centre while I would attempt to hold the French left off with my Russian cuirassier brigade.

There will probably be a good few more pictures than necessary so I do apologies!

The Russian advance begins: This is another little item I picked up on ebay. A little church that will hopefully eventually be detailed, airbrushed and placed on a little base with a wall surround. I have read so many accounts of fighting around church yards in the Napoleonic period and I thought this had some potential?

I held back a couple of battalions from the main advance as we already had six going in for the kill. My thinking was if the 1st lot did the damage they would come through and clean up and hopefully deal with any interference from the fresh French battalions to the right.

Our Russian battalions all positioned ready for the fight. I should point out that we are still using GdB 2nd edition for our battles as some of the guys haven't picked up the deluxe edition yet.

While Jon and I were getting ourselves shuffling our troops into their attack formations David jnr put their own attack plan into effect. The heavies protecting their right as the infantry concentrated on denting Roberts little force.

Robert decides to shift his light cavalry to protect his centre covered as they go by his Old Glory jagers. Sweet figures I have a few battalions of these to finish off and I have a soft spot for them.

Robert put his jager into skirmish order to try and pick off the odd figure as the French advanced.

A close up of what was facing David's French force.

As I mentioned earlier the figures are all from Roberts collection.
Robert has built up a pretty huge collection of 15mm Napoleonic figures over the years. A lot of them are painted by himself although he was saying he has also picked up figures from ebay and also a friend painted a good number too. His Russians are made up of AB, Battle Honours and Old Glory castings and as an army look ace.

Everything was in position, the presence of my cavalry had forced David's 2 spare infantry battalions into square and my horse battery was able to take some casualties off them and the nearest infantry in line. Things were looking promising!

No turning back now, a cheer went along the front for mother russia and our troops went into full charge .
to be continued . . .
Posted by Paulalba at 01:12 7 comments:

Sorry for the lack of updates, real life has been getting in the way of my wee hobby. My job is going through some changes at the moment and I should be changing shift pattern pretty soon. Also my loft continues to come together at a slow pace with the floor down and 2 windows in place it's really taking shape and hopefully within a few months I will finally have a permanent place to paint and game (and more importantly for my wife have a place to store all my gear out of her sight!). 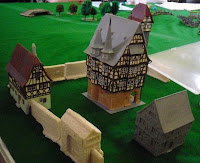 Saturday we managed to get a game of Naps on the go again (report to follow) and I took the chance to get some snaps of a little side project I have on the go. Years ago when I was building my 1/72 and 1/76 scale tanks I was hunting around for quality buildings that could be detailed and added to little late war diorama's. I looked at model railway buildings and although lovely the scale was out for what I needed.
However I've been planning on doing some built up area's for my 1813 Prussians (the type you see in the background of the Osprey books). I picked up some resin buildings at shows and had also been thinking of making a good few myself until it came to me that possibly the railway buildings may do the Job? A quick search on ebay and I spotted that Faller, Kibri and others had produced just what I was looking for! and HO/OO is a great match for 15mm.

The buildings I have posted are in the rough at the moment but you can see the potential in them. I managed to pick up some kits that are already built saving me a good few hours and with a bit more work: a base, some fine detail and a good paint job I think they will look great and another bonus is as they are plastic they are also very light! Hope this is of help to someone else planning their 1813 battles for 2013.

We spotted a huge full walled German town for £80 boxed (great value). If my wargaming plans come together over the next couple of years I will buy it, split it up and use it for some eye candy.
Posted by Paulalba at 20:27 10 comments: