I'm glad to say it's now time for me to post some of my finshed battalions. Of the 11 foot battalions I am working on I have now managed to complete 5 in total and the latest 4 are in the yellow facings of Silesia. 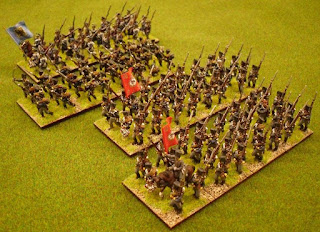 So the 10th Prussian/1st Silesian regiment is now ready to take the fight to the Corsican ogre!!! (although I still need to paint up 6 volunteer jager). 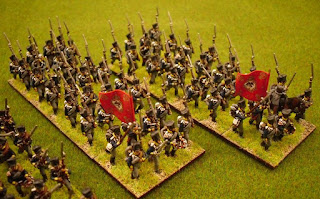 The line battalion figures are in the most part figures I bought from Darren with a good number of extras added in, they still took a lot of painting to turn them into my own style to fit in with my collection and I'm really happy how they turned out. 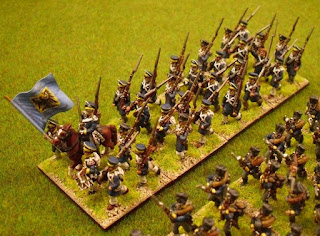 The landwehr are the 1st battalion of a Silesian landwehr unit of 4 battalions and are all painted from scratch using the army painter method then highlighted. I do prefer the tines the AP gives the uniforms compared to the highlights on black I used before. 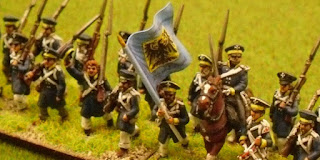 I picked up some GMB flags for my Prussians a couple of months back and most of them look really smart (their landwehr flags are really nice). 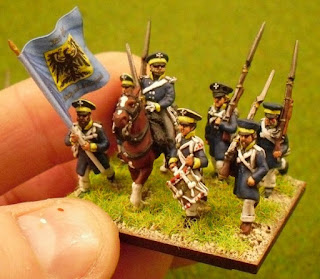 I cut off the old flag pole and drilled out the hands then used a paper clip as a new flag pole for strength (had to re-make the bottom hand as it came off). I'm pleased how the mounted officer came out as I thought I had added a little to much whiskers however he is a landwehr officer so he fits fine. The cool thing is that he is unique to me as he is a conversion from a line lancer officer. 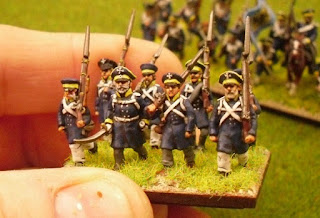 I'm pretty chuffed to get these guys finished off as I've had them lying around for a good while now. Every now and again I got them out to look at and wondered when I would get round to doing them so it's a nice feeling to see them based up and magnetised. 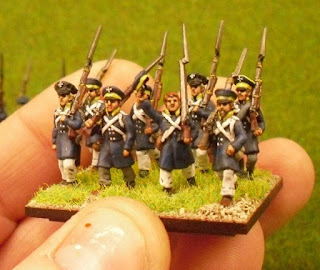 I think the AB Prussian landwehr are some of Mr Barton's nicest figures as there are so many poses.

So with these guys finished I have had to start a new storage box. It's kind of a marker point for us when we have enough troops ready to line another A4 storage box. Maybe I'll have a couple of beers in celebration?

Yesterday I hit the milestone of 40! I'm quite glad to be 40 as it is all round a much more solid and pleasing number than 39 ;0) Anyways it passed quietly and young David popped round to join us for an Indian meal. Again I'm sorry for not posting much lately however I think you'll understand when you read further down the post. 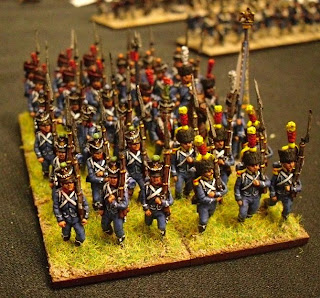 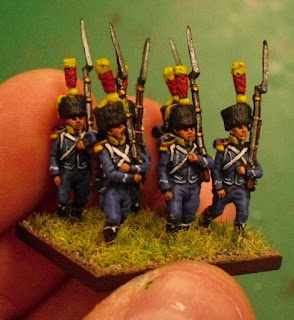 I apologise for the scabby thumb shot, I was watching the Liverpool game the other night and by the end I realised that I had chewed my way through all of my finger nails!!! I really thought they were going to get that last goal, substitutions were made at the wrong time for me I feel. 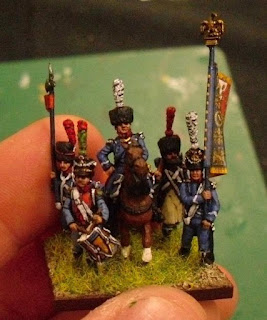 And here is the command base complete with the mounted colonel I converted. I think they turned out great! 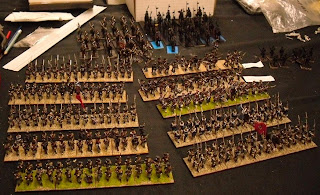 And this is the reason for my lack of posts, I have jumped right into the figures Darren sold me at the end of last year. When I split them up with the spare unpainted figures I worked out I could make up about 10-11 full battalions. This has been loads of fun as I'm getting a great feeling of bringing Darren's old collection to life again. 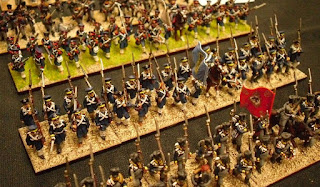 My pride and joy, 1st battalion of my Silesian landwehr. These guys are 100% my own work done with the AP method and only need the flag finished and piping on some caps and then they can be varnished. 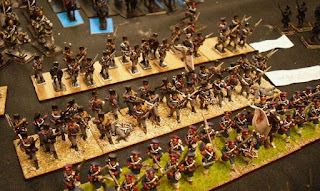 So I have been mixing in 10-15 figures of my own to each battalion. The centre battalion will be the 2nd battalion of the Lieb regiment. The 2 line battalions will be in firing lines like this so as they are different from all my other line battalions. The split of figures has worked out very well and as you an see still a lot of work goes in to make them my own. 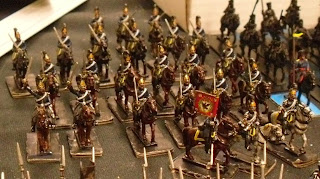 My poor Kurassiers left behind as I drown myself in foot. I have completed 3 at the back and the flag (it's actually crimson/purple not red). I hope to have all of the above finished by the end of March . . . watch this space!!!
On a wee side note: I have decided to sell off my unbuilt (and half-built) pile of 1/72 and 1/76 scale military models. I sold a huge batch to my old modelling buddy Calum however I still have hundreds left. I have been selling them at low prices for what they are and I have resin, white metal and plastic. German, Russian, US, Polish. armour, armoured trains, artillery, V2 rocket vehicles etc. Revell, Dragon, Esci, Milicast etc. Is there anyone out there interested in this sort of thing and if so what armies. You can contact me through my profile.

Hello again,
It might seem like I have dropped off the face of the planet and it has felt like it at times with 2 head colds and a chest infection in 2 months (and no it wasn't just man flu Mylene!). However I have kept busy with my Prussians. I have been bashing through the figures I received from Darren (10 battalions in my sights in total, 2 complete, another just needs grass and another a slight touching up and the rest either on bases with sand added and sealed waiting to be sorted out or in the process of having additional figures painted). Still quite a long way to go, however I'm definitely getting there plus I also have the Kurassier getting their final highlights and have the lancer regiment under way as I now have new brushes. My old faithfuls were condemned after the enamel paint for the subbuteo figures.

Anyway while I get my units together Craig has sent over some more cracking pics of his late Prussian collecting with text explaining how he is bringing it all together.

Introduction
The focus of my collection since 2001 has been the 1813 Autumn campaign, and in particular the Prussian 1st Korps of GL von Yorck. I have been playing GdB since resuming wargaming, which uses a 1:20 figure ratio, and most critically (for aesthetic purposes), bases close order infantry in a double rank. Rather than just dumping a bunch of photos on Paul, I thought I would provide an explanation of my collection, as it's organisation and history have been an important and enjoyable part of it's design and construction.

IR1 1st East Prussian
The 1st Korps is structured (as were all Prussian corps at that time) as four Infantry Brigades (each equating to a Division), with a Cavalry division and Artillery support. Each Infantry Brigade is comprised of three infantry regiments, with a regiment of light cavalry, and an artillery battery in support. The Prussian army at the time had been expanded rapidly through activation of Reservists, then mobilised into reserve units, and raising of a militia – the Landwehr. In order to balance the experience of formations, each Brigade would include at least one regular Line Regiment, and/or Reserve Regiment (where available), and a Landwehr regiment (two Landwehr regiments if there was not a Reserve or second line regiment). Each corps might also have a battalion of specialist rifle-armed light infantry.

Garde jager skirmishing.
This next bit might seem a bit boring, but is important for understanding the “brigades” I have created and deploy within my corps. Prussian regulations called for most tactical operations to be performed using three major elements: A vanguard, or screen; a main body; and a reserve. The screen would typically be comprised of the light troops of the constituent infantry regiments, any specialist light infantry, and some landwehr. The main body would be formed from the second battalions of the line or reserve regiments, and some more landwehr. The reserve would be formed from the senior battalions of each regiment, and (you guessed it) the last of the landwehr. The cavalry and artillery would be deployed to suit the circumstances. 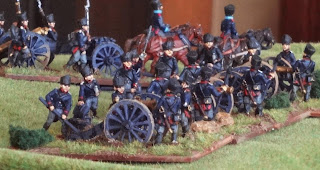 6lb Field battery.
For the command element of my corps I have created a small base which seeks to achieve two things: capture a sampling of the different troops fielded in the corps; and replicate the painting of Yorck saluting the Lieb Regiment for it’s performance after the battle of Wartenburg. 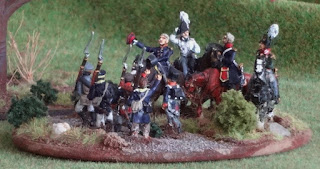 1 Korps command.
The figures on the base are all AB, save for the figure of Yorck himself which is Fantassin. He is accompanied by his ADC, and a kuirassier officer who has also removed his helmet. The fourth figure is a Russian liaison officer who would have been present at his headquarters, given that his accompanying formations in Blucher’s Army of Silesia were two Russian Corps. The foot figures represent a line officer, a musketeer, a reserve musketeer, and a landwehr infantryman.
Posted by Paulalba at 15:34 12 comments: