Well we had a wee Naps game 2 weeks ago at the club. Poor John M and Des had been thinking they were going to be playing ACW!

JP supplied the Frenchies and they were up against my Prussian and Russians. I was playing the French for a change.

It was going to be JP and myself fighting Des and John M until JP headed to work then I would take over all the French. However Stuart was left without a game so we press ganged him into the French army for the day (we were playing 1813 after all and the French needed every able bodied man who could carry a musket, in Stuarts case boil a kettle)

It turned out a pretty 1 sided affair with Des charging head long into Stuarts stuttering French assault with a pretty small Prussian force.

JP for some reason attacked the big Russian guns (and survived!)

John M was a good sport as he doesn't actually care for Naps and wasn't sure how to handle them but battled on nonetheless.

Some of my Prussians in Des's army taking flight.

Des sent over the rest of his brigade to try and stem the French tide.

The back of the Russian flank slow to make an impact in the game.

For some reason the lads had split up their cavalry and were late in realising the problem sending out the Prussians dragoons to combat the French cavalry on the Russian flank.

JP managed to clear the Prussian hussars from the table.

The French hussars eyeing up the flank of a Russian battalion unformed from a recent melee. 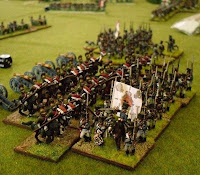 In the end my French lancers managed to go right through the guns and into the flank of the Prussian guard. The Prussians disintegrated and the Russians were in big trouble.
A pretty unfair game to be honest. Des and John M are very good wargamers but just didn't know the rules so much (Only John M's second game). It would have been wiser to split up JP and myself (and Stuart was a Jammie git as usual!)

I took all my Old Glory Prussian and Russians down to the club yesterday on the off chance of a game but unfortunately (or probably fortunately for me as I was burned out from night shift) my opponent was unable to make it. So to avoid getting roped into playing ACW (and getting beaten up, you got to watch your flank!!) or playing LOTRings with the younger lads (and yes you guessed it, get beaten up) I decided I would have a lazy day and take a final role call of my armies I have been working through this past year before putting them to bed and moving onto my next project . . .
AB RUSSIANS!!!

So here they are, you're probably sick of the sight of them by now! I have 6 battalions finished and another 6 packed away for another time.

Barclay DT leading his men on. 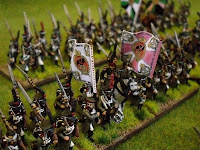 I am totally surprised at how nice the OG Russians turned out. I admit it I didn't care for them when I 1st seen them. 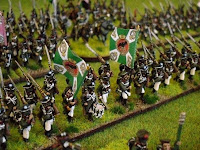 However they have definitely grown on me and I thing they make up a nice wee army.

A big thanks to everyone who helped me out with reference info and basically pointing me in the right direction. 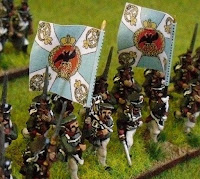 And a huge thanks to Suvoroff again for the excellent flags!

And here is my other little army that I am going to take a break from, my Prussians. I actually have a number of battalions in the process of being finished and I'll probably bumble through them over the next few months but the unpainted units are all boxed up and put out the way to save me from distraction.

This will be my last Prussian battalion finished for a while, my second battalion of the guard. I'm chuffed with how these guys came out. 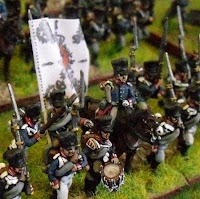 I tried to blend the OG figures in with the AB by filing their shako's down. The vast majority of my guard figures are AB which makes them stand out from the line units. 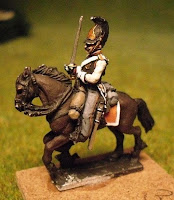 These are the figs I have been itching to get at, the Ekaterinoslav cuirassiers! (I new there was a reason I picked up that Foundation orange) I started testing out colours for the rest of the unit on these 2 figures and I have 11 finished now (I need to paint up 35 of the buggers!!!) 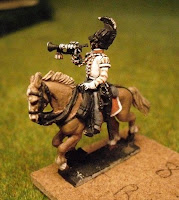 The figures are just gorgeous and the horses . . . well they are definitely the best I have seen in 15mm (except the 1 with the mad planted leg but still miles better than the OG nags).
So this next few months I will be mostly painting AB Russians!
Posted by Paulalba at 01:13 8 comments: