This is definitely my last post for a while. A few people have asked to see a picture of how my collection is coming together so I took some pics when photographing my Russian jagers. They were all put in the boxes in a hurry after our last battle so are not in order. 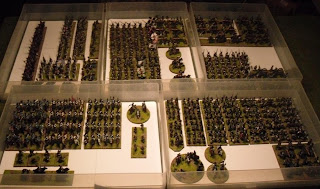 I stupidly forgot to add in my Minifigs Prussian to the pics (4 battalion, artillery battery and jager) but it gives you an idea of where I am at. 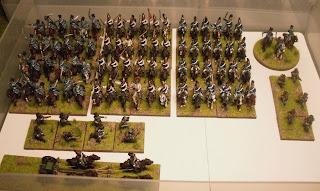 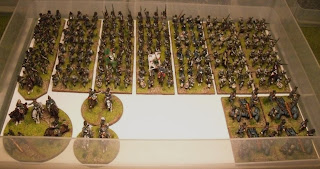 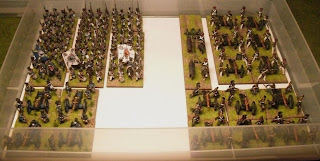 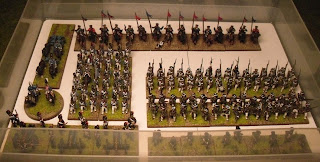 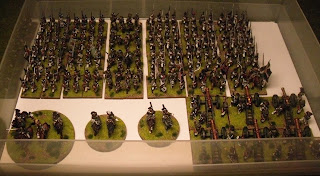 Russian infantry Old Glory: 2 line battalions, 1 jager, 3 grenadier (now 4), 12pdr foot battery and command. I plan to experiment and expand on my Old Glory and Battle Honours Russians. I think I have 8 or 9 battalions, 2 foot batteries of OG and 4 BH still to do. I want to paint them up fast so as I can then move onto my AB Russians. I'll post pics to show how I get on. I have around 30 cossacks, 3 Russian bts, 2 Bavarian bts and a Russian foot battery on the go (cleaned up and undercoated)
Posted by Paulalba at 07:51 20 comments:

Moving on from the Stylish blog nominations I have been working through some more Russians. These have been great fun if not a little tricky to do. I wasn't expecting to have anything done for a good while as I agreed to help out a friend with some figures, however he is away on holiday and I will be going soon too so we've put it on hold till June. (any burglars who stumble onto my blog the house will be occupied the whole time we are away ;-)

The post is a little picture heavy so sorry about that. The Jagers are all from AB and as I mentioned earlier were a little tricky as with the black belts against the green uniform you really don't get to see how they will finish up until you get the final grey highlight on and varnish them. 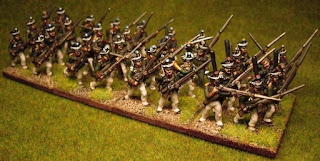 My regular setup with the elite base split so they can either be placed at the head of the column or placed at either side of the centre companies.

These guys are the 2nd battalion of 11th jager regiment from 7th division in 1812. I have 3 more battalions to do. 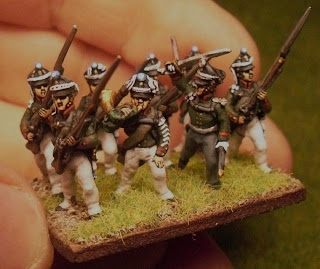 I added a hornist into the front rank of my main command stand to try and give them a more light infantry feel. Also my jagers (as with my Prussian fusiliers and Bavarian/Saxon lights) are all in skirmish order either firing, loading or advancing, my line are all in march attack. It's just my way of differentiating between my light and line. 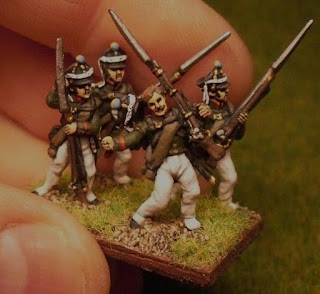 I picked up some AB casualty figures in a swap with Neil of the Napoleonic Wargamer blog (thanks Neil) and will be adding some into all my jager battalions. 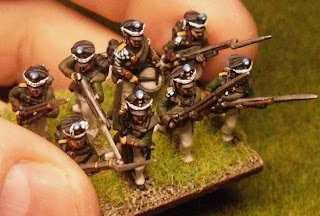 When I plan my battalions I try to add at least 1 character figure into each full company, either a musician, officer, NCO or casualty just to give a little extra interest.

I'm not sure if this will be of any help to anyone but since this little tip was passed to me for doing my WW2 bases years ago I have found it really handy. I put my static grass into old washed out and dried plastic fairy bottles (doesn't have to be fairy ;-) and after I have added PVA to my base I shoot the grass onto the areas (over an old take-away container). I find this helps the static grass stay standing up and afterwards you just pour the excess grass back into the bottle. 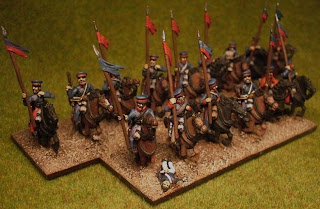 Also I have been working on some cossacks I picked up a couple of years ago from Stuart at our club. JP had hammered through them so I debased and demounted them, cleaned them up with files and mounted them on new bases. I blacked the areas JP had missed and have started repainting them. As with the rest of my OG Russians I am not going to spending as much time on them as with my AB's. 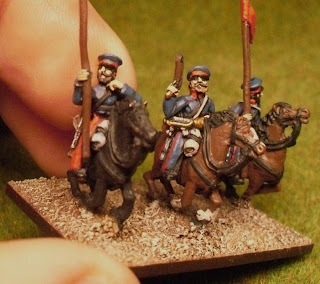 They still have to have their metal work cleaned up and the horses need finished but they are coming together well. I have 15 OG and 30 of a Polish manufacturer as well as a hand full of BH and AB's. 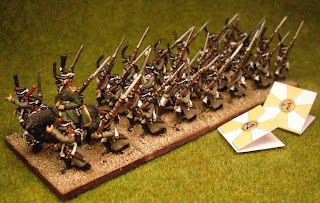 I've also managed to get another OG Russian grenadier battalion based and varnished. All they need now is their flags and grassed to finish them off. 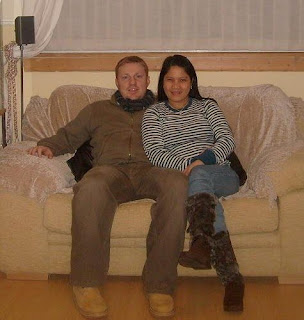 I'll be heading off to Falkirk for their annual show this Saturday. I'll be just off night shift so will be half dead but if you see someone wandering around with a rucksack full of goodies who looks like the guy in this photo it is most probably me (i'm the 1 with the red hair!). By all means say hello as it would be cool to put some faces to names.
This will definitely be my last post for a good while so Happy painting!
Cheers Paul
Posted by Paulalba at 12:19 22 comments:

Right it is time I took a break from my very busy schedule to receive my nomination for: 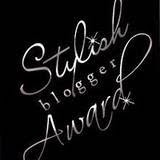 I have no idea when and where the award started going around but the 1st time I spotted it was over at The Angry Lurkers blog. It is with great pride that my wee local blog from rural Scotland has been nominated not once, not twice but 3 times!!!! The wife spotted 2 nominations last night and by the 3rd she had me pinned down and questioned me if I had been stupid enough to invest our savings in some pyramid/chain letter type scheme? I would just like to say that everything is under control now and she understands that it is just a bit of online fun!!!

Anyway I would like to thank my little old Mum, my hard as nails Dad (SERIOUSLY HE IS), my lovely wife (goes without saying but I better say it anyway if you know what I mean) and the wee mouse who visits us from time to time when its cold outside. You have been my inspiration (that and the gallons of red wine it takes to keep a steady hand while painting the piping on a 15mm figure ;0) So who are the gallant knights I have to thank for nominating me for this prestigious award I here you say? Well in no particular order:

Carlo from http://militaryminiatures-carloantonio.blogspot.com/
I just spotted that Mr Rosbif from: http://rosbiffrog.blogspot.com/
has given me a 4th nomination for "stylish blogger" so thanks again guys!!!

ok WHATS NEXT? 7 Things you probably didn't know about me:

1. I am very shy by nature and am not so comfortable in daylight. I think it has something to do with my red hair, pale skin and freckles? Yes I am a red head (actually more golden now)
2. For a couple of years I worked as a male stripper until a very unfortunate groin injury from the heel of an ex-girlfriend cut my career short.
3. I lived in Slovakia for a short while and managed to travel around most of Eastern Europe during that time. Probably the best time of my life as I didn't have a mortgage to pay!
(beautiful part of the world)
4. I was a Graphic Designer for around 12 years in a former life and very much enjoyed it and picking up a few awards along the way too. I miss my Mac (only time in my life I felt respected in a job).
5. After some intense physiotherapy I tried to make a comeback at the stripping but when your wife laughs you off the stage you know it's time to hang up the old elephant G-string!
6. I'm married to a little Filipina lady who is older than me!!! :0) (Yes you are, little old lady!!)
7. Oh I don't know? I don't like odd numbers as they are too fiddly, I mean 7 what can you do with a 7? try dividing it by 2 and see what happens!
Legal disclaimer: Either all, some or very little of the text above may be false. In true Hollywood style I leave it up to you the reader to decide. I got Tiger blood baby! :-)

And now to the really difficult bit, of all the excellent blogs I follow which 10 will receive the finger of fate? It could be you?
Drum Roll

Well it was a rough nights sleep last night but I have finally decided on the 10 blogs/bloggers who will receive my nomination for the Stylish Blogger Award, and the Nominees are again in no particular order as you are all great!!!
1. Ken over at: http://napoleonicadventures.blogspot.com/ Ken and I have almost 100% the same interest in figures, scale and nations and I have had loads of fun and interesting discussions with Ken since starting back into Naps.
2. Sgt Steiner over at : http://sgtsteiner.blogspot.com/ Sgt. Steiner seems to be pulling out great looking armies almost ever week and anyone who can do that deserves an award in my book.
3. Ged over at: http://gerryjelliottsituation.blogspot.com/ This is 1 mans love of our hobby with his friends and family joining in to make what looks to be 1 of the most impressive wargames holiday destinations I have seen!
4. Roger over at: http://rtbatlarge.blogspot.com/ Not only has Roger managed to put together a brilliant collection of 28mm armies, he is also a really nice bloke and we have been bouncing Naps info off each other for a good while now and he has helped keep my own interest in our hobby flowing.
5. Robert over at: http://skyoriszag.blogspot.com/ I started following Roberts Russian project a good while back and it has been a great inspiration for my own and again Robert has been a great help with many things hobby related.
6. Mr P over at: http://peelerswargamespage.blogspot.com/ The energy and enthusiasm Mr P puts into our hobby is there to be seen in his blog. I believe every wargame he takes part in he enjoys. Keep up the great blogging!
7. From Captain Richard over at:http://captainrichardsminiaturecivilwar.blogspot.com/ This is 1 of my favourite blogs, If you are into ACW figures and history you have to see this blog! He actually scratch built a Union observation balloon in 28mm!
8.From Matt over at: http://matratmatt.blogspot.com/ Matts work has slowed down his figure output of late and his Naps blog has been put on ice for the moment but still loads of excellent figures to be seen!
9. From Ian over at: http://hintonhunt.blogspot.com/ A different style of wargames figures (would it be fair to call them Old School Ian?). Real dedication to his love of toy soldiers and nostalgia for the figures he collected some years back. After seeing his blog I now have the odd shifty around bring and buys just in case there are some HH figures going cheap that may help him out with his collection.
10. From Neil over on: http://wargamespainting.blogspot.com/ Neil has helped me and my brother David in a huge way with our 15mm Napoleonic collection. I know he doesn't get much time for painting but what he has done so far is excellent. He also has some other cool blogs if you are into FOW or 40K.

Thanks to the guys for nominating me and also for all the bloggers doing brilliant figures and posting them online for our inspiration! Best regards Paul