I've had these guys sitting around finished for a good while now with just the basing needing ticked off, thankfully over the past couple of days I managed to fit them in and so they are the newest recruits to my Napoleonic collection.

Very happy how they have turned out overall. I like the shades of green however I have never really been 100% happy with the shine that the Foundry paints produce compared to Vallejo, Andrea or even GW yet the shades when varnished look very good. 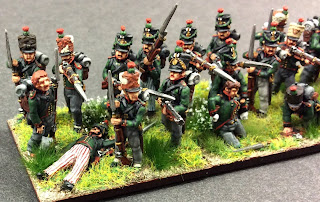 It's really nice to see how the conversions have turned out, the calf skin covers are maybe my favourite as from a distance they say Saxon more than anything else. The buttons and ticking material also looks pretty good to my eye so definitely nice touch to the unit.

Like a Bavarian light battalion I did earlier I feel the firing line works well and I definitely regret leaving out a few figures from the Bavarian line as suggested by a fellow gamer. To me a firing line looks best when there are plenty of troops in it and there is a lot happening. 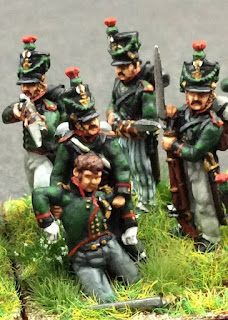 1 of my favourites in the line is the converted Austrian casualty set, they fit in as Saxons very well. 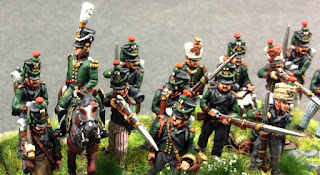 In this pic are 2 musicians, they were a bugger as just before I started to paint I spotted that instead of wings they should have epaulettes. They were a pain and a little rushed, however they will do fine!!! 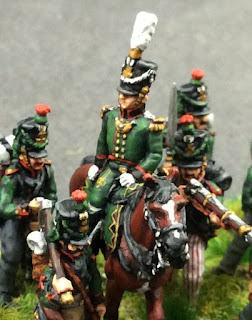 The mounted officer, I took the white plume from the Peter Bunde plate, probably should be a green plume but who cares!!! 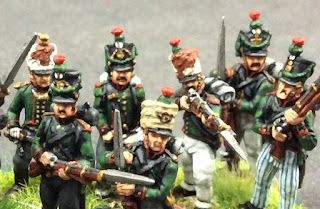 I pinched the idea of the hunting horn on the shako cover from a lovely painted 28mm figure and the Westfalia plates. Apparently the 1st regiment had the pompom colours reversed so these guys are the 1st battalion of the 2nd regiment. 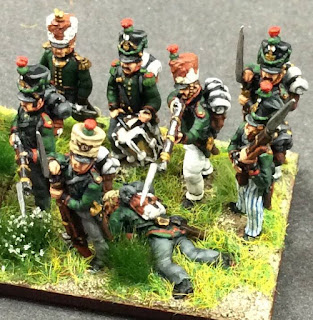 The little casualty figures really add a lot to the battalion so thank goodness Mr Barton sculpted them!!! 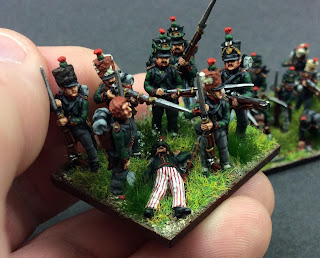 A wee close up of the ticking material 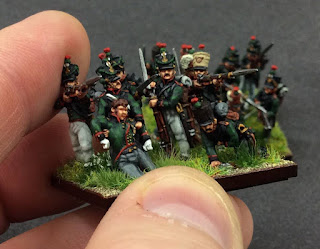 A well shot up base!

My Saxons so far, only 6 battalions strong, hopefully I will continue to add to them over the coming year!!!

Thanks for taking the time
Happy Wargaming!!!