My brother David picked up a couple of the unpainted Hovel Hougoumont buildings in 15mm at the Falkirk show last year as a little side project to see how he got on painting it.

And he decided in amongst his main projects he would build the complete complex for our future battles and this is where he is at so far.

David picked up the last of the wall sections on Saturday so I would guess it will be finished pretty soon.

I'm well impressed with this as terrain is not my strong point. I have been trying to convince David to scratch build some buildings for our 1812-13 battles for a while now so fingers crossed.

On another note I managed to swap away a large part of my 28mm Napoleonic armies that had been lying around for almost 20 years and replaced them with more 15mm Napoleonic figures that I feel I will be able to finish. 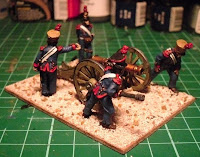 I called my brother David to tell him about it at the start of the New Year for him to tell me that over the Christmas break my nephew David had painted up a Perry artillery crew and gun (left) and he had worked his way through a plastic Perry French battalion! (awaiting bases below) 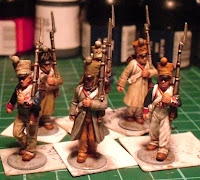 To give you an idea if you have not already read in my older posts I had hoped that my brother and I would do the 28mm Naps together but David was not confident that he could paint the 28mm figures. Anyway with the army painter method he has been able to get a lot done, and has bought more.

20 years my 25mm/28mm Napoleonic figures lay in lofts, 20 years!!!! Thankfully I still have some Elite Prussians to fight their new found love of 28mm Perry plastic French figures!
Posted by Paulalba at 08:49 10 comments: 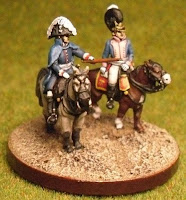 I thought it was about time I done a little brigade command for my Bavarians and I was needing a new avatar and since I have been reading "A soldier for Napoleon" written from the letters of Lieutenant Hausmann of the 7th infantry to his mother and father throughout the napoleonic period I decided to do Lt. Hausmann and Generalmajor Beckers. The base still needs grass added but it is pretty much compete.

So this is Franz, he's an AB Saxon mounted officer with a Bavarian head swap and sash added (I'm really happy with the sash) and epaulettes removed. General Becker was a bit more complicated with bicorne and details, cloak, fur on saddle and cuffs to his boots added with green stuff to hide he was once an Austrian mounted officer. I'm not sure on the greatcoat/jacket as it probably should be double breasted but I figured it could be a personal item for campaign?

I'm working my way through light infantry butler at the moment and have a Russian foot battery just needing a few hours to finish it but I fancied doing some Bavarians.

Books: I have a little question regarding a book, a friend in the US picked up "With Eagles to Glory" for me (cheers T) and I am really enjoying it and I was planning on buying "Thunder on the Danube" by John Gill also. Is "Thunder on the Danube" a series of 3 books? I see on Amazon there seems to be 3 parts. Any help would be most appreciated
Cheers
Paul
Posted by Paulalba at 02:40 6 comments:

Ahhhhh, what a day, WHAT A DAY!!!! It's been a long while since I last got a chance to have a game of Naps and today was just brilliant. DC and myself had talked last Saturday about having a 2nd battle of Polotsk 1812 type game with a joint Bavarian and French force attempting to hold back a superior Russian force. Just a few pics from the battle and the main report and more pictures will appear over on our club blog when I get the time: http://carlukewargamesclub.blogspot.com/

I got in contact with Robert earlier in the week and he decided to join us for the day, so the 3 of us were all set. As the week went on we managed to pick up my brother David and then JP text me late last night to see if he and the D-man (travelling from the highlands) could join us.


D tried to fool us into thinking that he was taking his wife down to visit her sister but we all knew he was just looking for an excuse to get down to the club!

It turned out we had much less Bavarians between us than was 1st thought so it was pretty much a French and Russian stand up fight with my single Bavarian battalion getting their 1st outing along side the French (Answers on a postcard if you can guess what happened next?). 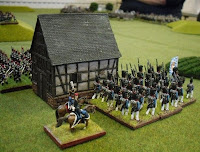 Des, JP and David P (my bro) were playing the evil French and the glorious Russian forces fighting for all that is good and just in the world were being played my Robert, DC (I think playing Russians for the 1st time) and myself.

So both camps disappeared to sort out a plan for the battle. Knowing that David and JP are very aggressive players (west of Scotland mentality) we decided to have the 12pdr battery facing right at them both with the bulk of the army in support. I was out on the left with 2 Hussars regiments and an infantry brigade trying to pin down Desmondo.

True to form JP and David P went straight for the jugular with the main French force coming down the centre left and centre with Des also pressing myself hard with 2 large cuirassier regiments hoofing it towards my guns (shades of the light brigade at Balaclava?).

Our Russian foot battery soon began to make it's presence felt taking a heavy toll of the advancing French columns.

Some of my Russian battalions glad to get out of their box for the day.

My 2 Hussar regiments forced D's young guard into square but through the woods his Bavarians and old guard kept coming. It would appear that Des is an aggressive player too!

Des declared a charge on my horse battery and DC declared an opportunity charge with the the Russian cuirassiers to block them.

Meanwhile in the centre the French massed columns edged forward.

All across the battlefield things were getting tense. For reasons known only to himself the D man brought his Bavarians out of the wood and I managed to charge home (the Bavarians stood!) and I rolled an 11 in the melee and des rolled low and the Bavarians disappeared for the battlefield (a bitter sweet moment for me).


So in their 1st outing my Bavarians were the 1st to leave the table! I only hope that this is not the way it will be when they are under my control?

The cuirassier regiments continued to fight it out in the centre with Des getting the upper hand in 1 encounter destroying their opponent before returning to their own lines to regroup.

However the other Russian cuirassier regiment held its own giving the Russian centre time to knock the paint of the by now charging French columns. The French main attack faltered and disintegrated. (sorry no photo)

I managed to destroy another of Des's battalions and the brigade broke and retired 30cm and my hussars kept up the pursuit. In the end it was a victory for the glorious Russian army once again freeing our lands from the oppression of a foreign dictator.

It was a great game played in a really fun spirit. I was lucky enough to be playing against Des who has to be the most enthusiastic wargamer I have ever met. His passion for Napoleonic history and wargaming never fails to rub off on you! Win or loose Des is over the moon to be a part of the battle moving around all the painted figures. Cool!
Note to self for the day: I need to get more Russian cavalry and Bavarians painted.
Posted by Paulalba at 12:30 7 comments:

So the new year has begun and over the holidays I have been having a think and have had a few idea's.

Over 2010 I have slowly been getting shot of bits from my lead mountain (through ebay) that I know I will definately never paint. However I was looking through my stash and I still have a very large amount of 25mm and 28mm (unpainted, painted and part painted) and the thought of photographing them all and sticking them on ebay is a little off putting.

Still the fact is I just don't have the space for them and I know of 2 people who live within 30miles who are into 28mm (but game in 15mm!), almost everyone I know prefers or only has the space to game in 15mm or smaller!

Anyway I came up with a possible idea: I will now only be gaming in 15mm naps and mostly I collect AB (and maybe also battle honours) so I was wondering if there was anyone out there going in the other direction jumping up to 28mm from 15mm? And if so would you be interested in a swap?

I have 28mm Essex, Elite (old and new) and Foundry figures. I have British (stove pipe and belgic), Prussians, French, Austrian and some Russians. Some are in full battalions, squadrons, batteries and also some are loose figures. I have infantry, artillery (limbers too) and cavalry (some of the figures are painted to a good wargames standard and others are undercoated, army paintered and highlighted). Most are late war.

If you would by any chance have 15mm AB's (or battle honours) of any nation that you would like to trade drop me an email: paulalba2004@yahoo.co.uk and tell me what nations and type you are interested in and maybe we can help each other out. If we have a possible trade I would be happy to take some pictures for you.

So I hope some of you guys in the Naps world are in the same position as myself and would like to make a swap. (Also if you are interested in buying any I have a paypal account so no probs there either).

Well I am glad to say I managed to get 2 swaps for some of my big Naps. I was able to exchange my 28mm Elite French for a similar amount of 15mm AB Russian and French helping me tie up a few loose ends with my Russians and boost my own AB French troops as well as my brothers BH French and I believe the gentleman is very happy with the swap too (so a really good deal for us both). Also the D man was needing some more 25mm naps so I was able to pass some Essex French and British his way in exchange for some Xyston spartans (another future project, please don't ask).
Posted by Paulalba at 12:32 No comments: