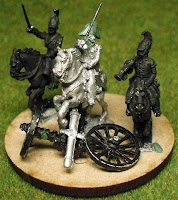 I was going to wait until getting these guys finished up before posting them on the blog but I have hit a minor stumbling block.

I am working on a command base for my AB Russian cuirassiers. Anyone who has done an AB late Russian army will know that there are not so many command figures in the range and you either have to add in figures from other manufacturers or do a little bit of converting. I had a spare Bagration figure from last Christmas so I decided to make him into a cavalry general. 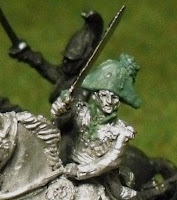 I gave him a haircut and a new bicorne hat, altered his open coat and added a collar and cross as well as giving him a new straight sword and scabbard. I remember someone telling me that the cavalry generals at times would wear the uniform of their parent unit so I want to depicted my lad in a white cuirassier uniform. My little problem is I am not sure if his facings and turn backs would be the colour of his regiment or red in the generals colour? Also for the officer in the background was it still possible for him to have epalettes and a helmet with white hair?

Also another puzzle for me:
How do these guys go together? I have never seen a picture of this caisson and my question is where does the rider sit in the centre or the left? Also should the 3 horses all be in line or does the centre horse sit forward of the others? Also what is the stuff at the back of the caisson, is it straw for the horses or ropes for dragging the guns?

And my final questions: How do the Russians attach their horse teams to the limbers/caissons? Is it with leather reins or ropes?

These guys have been sitting around like this for a good while and are now completely finished off with varnish and grass (24 of them anyway, I'll finish the other 6 later).

I'll post the finished product when the commanders are also finished.


Any help with my above questions would be very much appreciated.

I've also been working on a Bavarian limber team converted from a Battle Honours (maybe AB?) Austrian limber team. Again thanks to RtL for help on uniforms and kit and also to Martin at Warbases in Dunfermline who was decent enough to cut up some special sized bases for my limbers and cassions.

A straight swap of heads pinned in place here. I also added the shoulder scales and lapels in green stuff as well as shaping the canteen to the Bavarian style. I know the horses are too dark and my nephew David will probably yet again point this out to me but what can I say the uniforms are bloody bright ;-)

The limber should be finished but I broke a couple of the attachments when varnishing so I put it to the side. This is 1 of a number of limber and cassion teams I am working on as I have none in my armies at present.

Note of appeal: I have a spare Austrian rider and 2 spare horses and have converted an Essex French cassion for my Bavarians but I am still short an AB/Battle Honours Austrian rider and 2 limber horses to finish it off (same as above). Does anyone have any spare? I am willing to trade for them to save me buying another from AB. 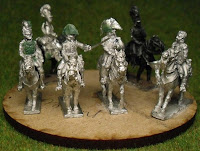 Wrede and staff: A lot of conversion work here with hats rotated to give a later style and since I took this photo I have added a cloak with upper cloak to the officer pointing and Wrede has received a sash diagonally plus the hats and saddle cloth details have been added. All are AB figures (Bavarian cavalry on guard, at the rear left, Bavarian officers are a converted British officer, a converted Austrian officer and 2 early Prussian officers) still with lots to do. 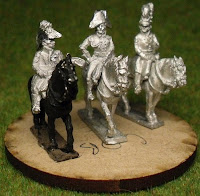 You will see the mounted Bavarian in helmet cropping up again (maybe he is Franz Hausmann?). I got a bunch of them in a job lot (cheers Steve) and decided to use them whenever I could.

The figures look much different now!
Posted by Paulalba at 00:31 4 comments:

Thankfully my new book gave me a bit of inspiration to pull my finger out and get some of my Bavarians finished. Straight out sorry about the pictures as I just don't have the proper light for it

So this is the 1st battalion of the 11th Regiment Kinkel for the period 1812-13 and the figures are from AB with a pioneer from Fantassin.

RtL these are especially for you as I know you were keen to see how they would turn out, thanks for all the help on the uniforms and I hope they don't disappoint! 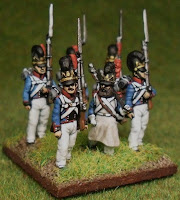 My grenadier base with the Fantassin figure added in. I am not a big fan of the Fantassin range but this guy fits in really well and I feel completes the unit (you can buy him in packs of 8 which is very helpful!).

To try and make my figures look a little different from each other I twisted a lot of their heads up/down/left/right and thankfully the Bavarians big hat made it pretty easy to do. 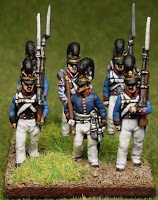 A little head swap here, the officer is from the AB Austrian range. In a lot of the pictures of the 1812 period the Bavarian officers have single breasted coats and this figure fitted perfectly. I probably should have added a gorget (if that's what you call it) to him but I totally forgot. I couldn't resist adding trousers with green stuff, they are a little rough on the repainted figures. 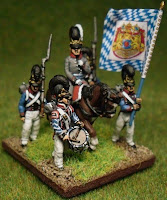 The drummer was pretty tricky with all the chevrons and I wasn't exactly sure how the edging went at 1st but I am happy how he turned out.

I was lucky to pick up some AB flags on ebay a while back. I drilled out the hands and used a straightened paperclip as the flag pole (cheers for the tip Robert).

I'm well chuffed I have my little Bavarian army on the go. I remember buying a couple of battalions of Foundry 25mm Bavarians many years ago and just didn't feel right with the shade of blue. I really think the 3 shades Foundry offer are excellent for the job. I blocked in the uniform with the cornflower blue shade and the mid cornflower blue is still deep and can be added to the shade to keep the uniform dark.

I decided to use the mid tone neat then added a little bit of the light to the mid tone for my final highlight and I feel it works pretty well.


It is darker than these pictures show

Next up unit wise will be the 5th Preysing, 1st battalion (pink facings Yes!!!!!!!!!!!!) before that I will post some pictures of my finished Bavarian limber and some in progress pics of my commands.

I would like to say a huge thank you to everyone who has dropped by, left comments and sent emails about my wee blog. It's been great fun and very helpful. It's great to know there are loads of other people who share the same interest. My knowledge in the Napoleonic period is very limited so again thanks to everyone who have filled the many gaps for me!!!