This is a very pleasant post for me as the idea to do this battalion has been in my head for a good few years now. When I 1st noticed the difference with the light infantry uniform to the regular line infantry it knocked me off a little as I realised I would probably have to convert the troops. So I'm very happy to see the battalion coming together at long last, and also that the conversion work I've done on them looks not bad at all.

This video is a little old as I am now in the process of finishing off the bases. I plan to do a 2nd battalion, however I'm short a few skirmishing figures so they will have to wait for the moment. 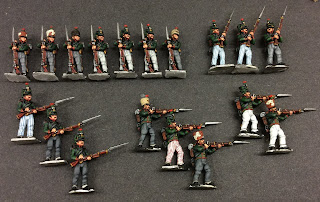 The 1st stage was to get the main troops finished. I tried to put a good variety of headgear and trousers within the unit to give a more unique look.

The calf skin covers were probably the most fun to make and paint as it seems to have been a very Saxon specific piece of kit that must have looked splendid on the battlefield? 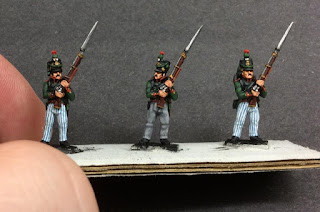 These wee guys are converted from Bavarian troops and are probably the weakest area of the battalion as I did the head swaps so long ago. I think on at least 2 of them the heads sit a little to low on the shoulders. However within the battalion who will notice, perhaps a cannon exploded close by? 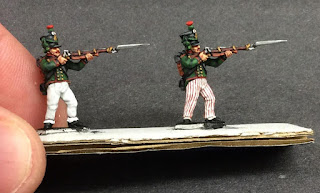 Another couple of firing dudes this time with shako uncovered. 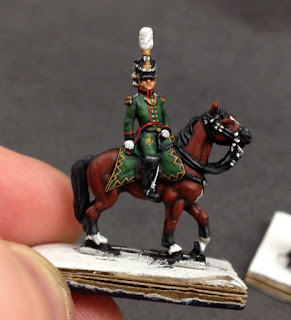 My mounted officer, possibly a little fancy considering how all the rest are dressed? I am really happy how his buttons and gorget came out. 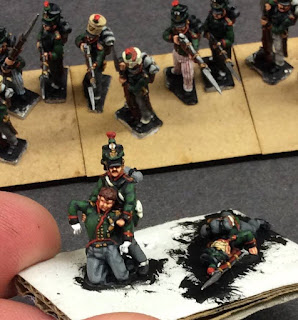 Maybe my favourite in the battalion are the officer and trooper converted from an Austrian casualty set as I had to remove the officers sash. I like the way the uniform front falls open plus how the gorget hangs from the uniform (I picked up the idea for this from a Europa militaria book with pictures of french Napoleonic reenactors). 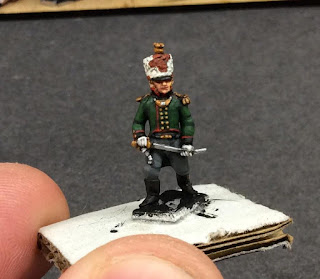 Another little guy I like, I changed the boots into a more line infantry officer style at the last minute however he still looks fine. Maybe the belt would be better hidden behind the large flap on the front of his overalls? 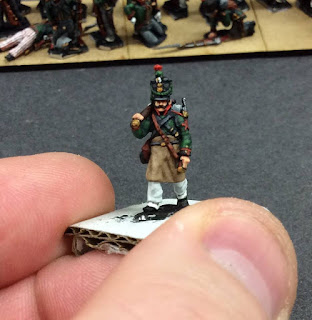 And a Zimmerman who possibly doesn't quite fit in as he is walking forward while everyone else is standing firing, loading (or dying) around the place.

Thanks for sharing my little journey with these guys!!!
Next time you see them the basing will be 100% complete.

I'm glad to say I managed to get a good sized game in at the end of June, the Falkirk lads set up for the Dolitz 1813 scenario from the Leipzig battlefield. I have put a little video together as a run through of the action and i'll pop up a few pics of the action below:

The battlefield was built up from Kalistra hex sections. 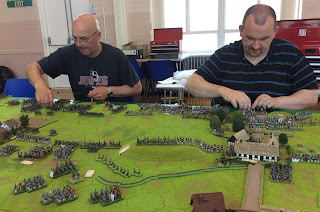 The lads getting set up for battle, 2 of the 3 Allied commanders for the day. The 3rd had to be clipped from shot because of a very dodgy T-shirt. 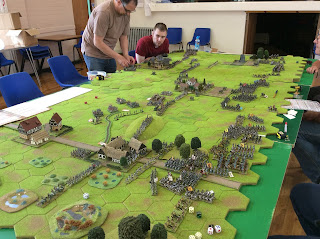 A table of Napoleonic loveliness. I find it really inspiring seeing everyone's troops laid out on the table. Even without playing it would be a great display. 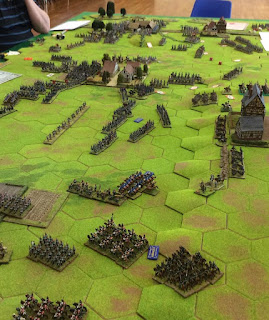 Helicopter view of the battlefield. 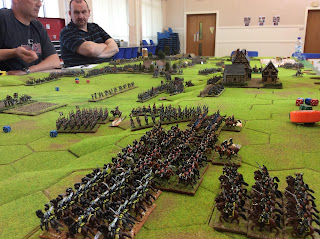 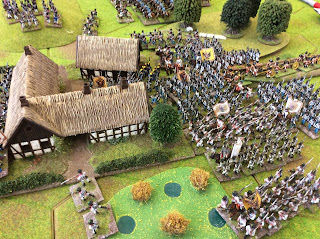 Austrians take the 1st of their objectives. We need to add a sizeable Austrian contingent to our collections as they are always 1 of the prettiest armies on the tabletop. 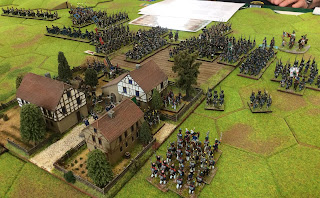 Prussian advance in the centre soon to be given a sharp shock.

The Allied centre starts to struggle under a flank attack from our Poles. 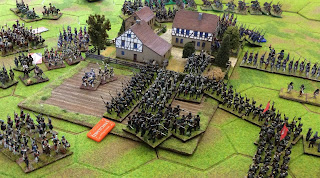 The Prussian centre begins to fold. 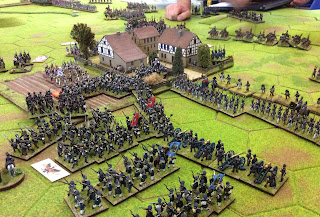 and the Poles keep pushing! 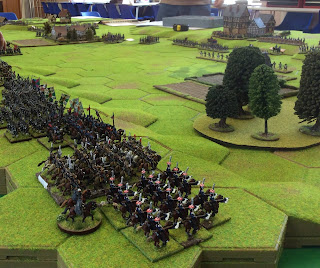 On the other end of the table from me the Russians prepare their advance. 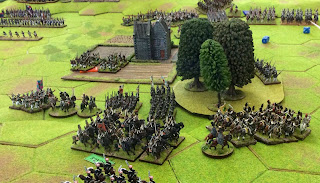 Some of my Russians joined with RT's Russians led by Sho Boki command figures. 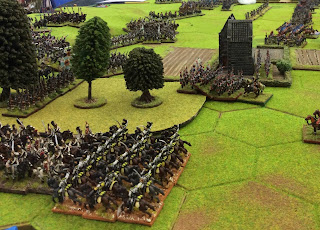 Again the Allies are blunted by the glorious French and our Allies! 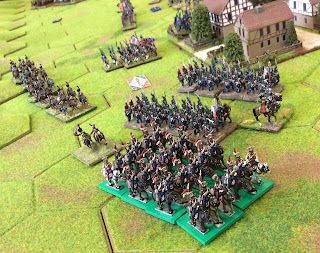 The French claimed victory on the day, we had for the most part held the Allies back and in the centre we had seriously dented the Prussian advance.

As usual a very fun day and a chance to take stock of what is missing from our collections. Next I will post an update on my Saxon light infantry battalion. I wanted to put a post up earlier however I wanted to push on to the end so needed any available time for painting.

Hello, another long overdue post, thankfully my little lady is well on the mend now however I really haven't had a great amount of free time for the hobby. I have managed bits and pieces here and there so there has been some progress if not a lot. I'm still very enthusiastic about my Saxon project and managed to get 3 test figures complete so I feel I have my colours nailed down for my 1st battalion.

As usual I made a small video showing their progress, hopefully get stuck into them a little more this month.

I'm so happy to have finished all the little conversion work on these guys and it wasn't as much of a bother as I thought it would be. It's a pity there aren't any Saxon light infantry available in 18mm (please correct me if I'm wrong!) as they have a sweet uniform. 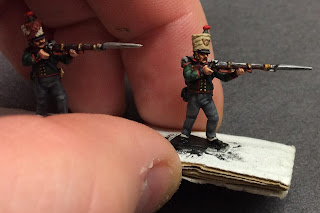 I'm chuffed with how the buttons have come out, this was my main concern for the conversions that the buttons would look reasonably good and I'm very pleased with them. 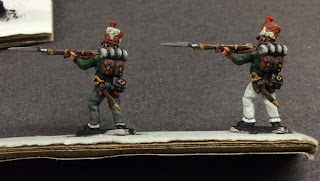 The calfskin covers area a touch I picked up from the beautiful Westfalia 28mm Saxon range and Kawe's reference plates. Have to say a huge thank you to Kawe for his constant help and encouragement with my 18mm Saxons!!!!!!

With very little time to sit painting I decided when I had that spare 30mins I'd do a little bit of modelling here and there for my nephew David's 20mm WW2 Russian collection. I also managed to build 4x T34's that are not shown, so I'll hopefully share some progress of David's growing collection soon.

Gonna relax today and watch all the sport on TV, best of luck to Andy Murray in the Wimbledon Final and it's the Euro Final tonight, not really sure who to support? France have been the better of the 2 over the tournament but the semi finals were strange. Perhaps since Wales and Iceland went out the tournament has lost some of its shine? Wales were brilliant!!! so sad to see them go home.

My next post will be a game I managed to fit in last weekend from the 1813 period.