Well my wee camera came back in good shape from those nice Samsung people so hopefully it should last me for a good while now, however as I had no spotlight I wasn't sure what to do? I tried cleaning up as many 15mm naps as I could but the lack of a spotlight was straining my eyes something awful.

So I decided to fish out my 1st love, my old 28mm napoleonics.


My brother used to bring home wargaming magazines when I was a lad filled with the most amazing colour pictures of 28mm battles and figures so when I had money of my own I started buying them by the bucket load. The only problem was there wasn't a person I knew who shared the same passion. 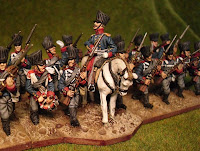 Jump forward 20 years and I've decided to keep my Prussians and French and ebay the rest. Here is my 2nd West Prussians (Silesians originally but I lost my old yellow and I figured I'd stick with what I knew!) finished the other night. I was short a few figures in my 28mm battalions (I think it was 24 figure battalions I was aiming for before?) so I ordered up some extra's from Elite Miniatures (only to discover they had changed design!). No matter they'll do for me.

And here they are with their battle hardened little brothers.

With hindsight I should have dropped the flagman and made these guys the fusilier battalion with black belt as I don't know when I'll get round to buying flags? 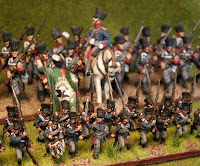 So 20 years in the making and I finally got them based and varnished . . .


I hope the second battalion doesn't take as long!
Posted by Paulalba at 03:20 8 comments:

Well I'm still waiting for my camera to return but I managed to get a loan of my wife's friends camera when she dropped by a week or so ago so I knocked off some quick pics. Just for fun my painting light, that I also use for taking pictures decided to die!!! (Unfortunately not just a bulb as I have tried 2 others but the light itself). It was a very old light that I was given by my friend Tom down at Milicast and it will be sadly missed. However another is on it's way from ebay! So to save my eyes from torture I have been sanding and slashing and preparing instead of painting.

I picked a load of Bavarians up on ebay a while back from Dirk in Germany. I already had a stack of unpainted figures and another wee load is on its way to me right now as I type (cheers Steve) As they already have a coat of paint I will be giving them a quick paint into my own style and they will form the rear ranks of my battalions and the unpainted figures I will be starting from scratch will be at the front. I have always fancied a Bavarian brigade or 2. The flags are probably the nicest of the Napoleonic wars plus the light blue uniform and unusual hat help make them stand out on the battlefield. I have been having a good discussion about their uniform over on the GdeB forum and I believe these guys are too light, unfortunately I had almost finished the 1st battalion before finding out. So this is roughly how they will be looking when they are finished. I have been trying out the foundry paint system on these and they were done with the Bavarian cornflower blue and highlight so for the next battalion I will try with the shade and Bavarian cornflower and see how it looks. 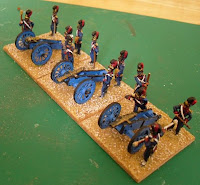 I rebased the artillery I got (a 3 gun battery thank goodness!!!). the guns are Old Glory and will get cleaned up and punted I think? I have 2 more AB batteries on the way all with lovely AB Austrian guns!!!!!

This was my test figure to see what blues I will be using. Some of the reference material I have seen show the uniform in very vibrant shades of blue but I have went for a duller hue.

My Prussian Guard jagers: I took the opportunity to get some sand o their base so as I can get them finished off. I read somewhere that some of them wore Hungarian style breeches so I thought it would be a nice talking point. I don't know the reason behind it? Maybe supply problems or a recognition of their allie? If you know the story behind it I would be interested to hear it!

And my Russian horse artillery battery: it's all finished now with varnish and grass (I have been struggling with the Foundry paints as I find it hard to visualise how they will look when finished because the paint is so satin) I'll post some pics of it when my camera returns. The green is very nice when varnished, I used the Russian green light shade as I felt the shade and middle colour were just too dark for 15mm. 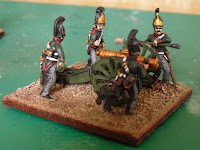 Boy this was a job and a half and more so because I am not keen on painting artillery (I have no idea why?). 24 figures and 6 guns, well at least it's done now!!!
Posted by Paulalba at 05:57 7 comments:

It's a funny old life.

Lots of times I can't be bothered to take pics and put it off till later but since our wee pink camera broke down I have been itching to get snapping again!

I now have finished a Russian cuirassier regiment, a Russian horse battery and I am powering my way through a recently acquired load of AB Bavarians. Also there have been loads of exciting armies and games on show at our club too!!!!!!! Ahhhhhh!!!!!!!

The good news in those nice people at Samsung sent out a return envelope and packaging and promised to either repair or replace it. I hope to hell they run out of pink 1's and they send out a silver 1 instead (shhhhh, don't tell the wife)

So hopefully I will get her back soon but for now I'll just keep on painting.
Posted by Paulalba at 19:32 4 comments:

Well I had planned to put some pictures up of my recently finished AB Russians but our little pink camera decided to take a funny turn mid way through our annual leave so until I get it fixed here are some pics of my wife scaling her 1st Scottish Hill "Tinto Hill" near Biggar in South Lanarkshire.

We have both been pretty concerned about our lack of exercise and the extra weight we have picked up over the past year and we decided to do something about it!

It has been a bit harder for Mai to keep healthy in Scotland as when you have lived most of your life in a hot country the thought of getting yourself out and doing exercise in a country that laughs in the face of sunshine must put shivers down your spine. However she is now getting used to the climate and is now keen to take on the world. Tinto is a hill that I have climbed up pretty much every year from childhood (school outings, Easter Sunday and family fun days have seen us meandering up it). When you live close by it becomes part of your mentality

I'm well proud of Mai as she really got into it in a big way. It was a beautiful day and it was nice to see so many people up on the old hill and it was great to see the sense of achievement (relief) on Mai's face when she made it to the top at last! What a class act, she took a little makeup bag and mirror in her backpack, I nearly died laughing. 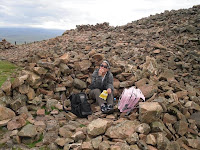 And the best bit, snack time at the top. There is nothing quite like a garlic sausage sandwich, a packet of crisps and a bar of chocolate after a long hill walk.

Tinto didn't fail to live up to its reputation of always being mega windy when you reach the top. In all the years I have been going up Tinto up top it's blowing a gale! 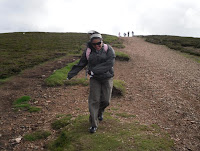 The best bit running down, We had some kids hot on our heels so we decide they "would not pass". All good fun (as the kids were totally oblivious to our little race!) and we really got a sweat up.