So down to part deux or dva if you are Russian 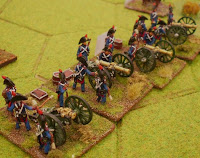 It's great to see the earlier AB French figures getting a run out as all the figures in our collection have the shako. 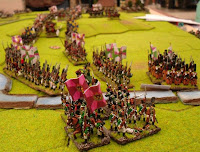 A close up of the Russian weak left wing.

The Russian commander for the day was Robert

Robert has started using washes for speed when painting his Russians and they look the part. I tried it on some horses and just couldn't get it to work :-(

The French cavalry making their push to take the main Russian held village.

And the Russian CnC taking control of the defence. 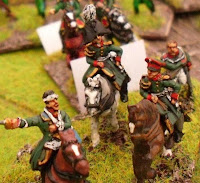 I believe this is Bagration? (correct me if I am wrong guys) I will have to take a good look at the Fantassin Russian commanders I bought as these look really nice when painted up. I had them selected for punting on ebay!

The French objective for the day: This is what I need, some nice looking terrain for my battlefields.

The Russian centre: I have a couple of AB Pavlov battalions myself to paint up and hopefully they will look as good as these when finished.

I think everyone has a soft spot for the Pavlov's as their shiny gold mitre stands out really well amongst all the shakos.

Another future purchase for myself some artillery limbers but mine will be in the late war uniform.


Hopefully I'll get a chance to pick them up before VAT goes to 20%! 20 bloody per cent what is the country coming too?

Possibly the only Minifigs on the table? The more animated castings of the 3rd series I think? In the end the battle was fought to a draw! 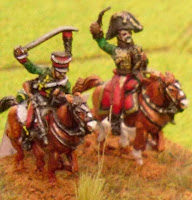 Thought I would end with Lasalle, he was riding past just off shot in 1 of my pictures. Pretty hard to miss him!
I have got to get me some red trousers!


Figures:
French : Billy
Russians : Robert
Villages : RGary, Peter and Robert
Hex Terrain : Billy S (now I know what happens to indoor five-a-side footballs when they die, their soul may be gone but their bodies live on as battlefields across the land)
Posted by Paulalba at 13:24 2 comments:

On Saturday my brother David, my young nephews David Jnr, Ian and myself headed over to Edinburgh for the annual Claymore show. It was the second year in their new venue and like last year it was a cracking event. I didn't intent to buy much as I am pretty much organised on what I would like to paint for say the next 200-250 years! however there was loads of great stuff on offer and I picked up some nice items.

The lads from Falkirk wargames club (Billy, Gary, Peter and Robert) were re-fighting a section of the Friedland battlefield from 1807 so I took the opportunity to take some pics of the action.

2 views across the battlefield from behind the French left wing

And it looked excellent!

Billy S was in control of the French left 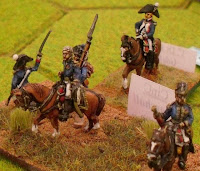 With our club closed for the summer and the usual holiday distractions my painting ground to a halt and I needed a few volts of inspiration shot through me and this display did the trick!

The vast majority of the figures on show were 15mm AB's and the quality of painting was great.

(if the guys would have wondered off I could have quite happily sat for a couple of hours looking through all the figures on the table, yes I am that sad!). 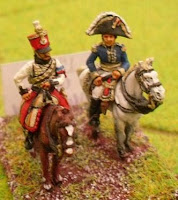 I stumbled onto wargaming a couple of years ago and for a good while I wasn't sure if it was really my thing. To be honest I am happiest pouring through my reference material looking at all the colourful uniforms reading and re-reading the history of the Napoleonic period and at the same time painting away.

The guys at our club have encouraged me to take an interest in other periods and I have started a few (and have had some fun in doing them) however it's really only the Napoleonic period that catches my imagination.

A view from across the Russian's fragile looking left wing with what appears to be a powerful French army approaching.

Peter was in control of the French right wing

I really like the look of the French infantry in chapeau. 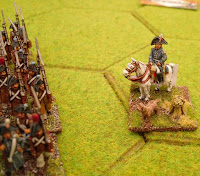 A French mounted officer and his wee dog supervising the french advance.
It's little details like this that gets my own brain working. 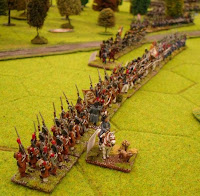 I'm lucky here in central Scotland as there are loads of people who share the same passion for Naps and a lot have been doing them for many years trying out most (if not all) of the rule systems available and thankfully they are happy to pass on their wealth of experience.

So when I came along all I had to do was start painting up my own wee men and base them to the rule system that most of the guys were playing.

My knowledge of the earlier Napoleonic period is very poor. From around the age of 15 to 20 I pretty much submerged myself readying everything I could about the Napoleonic period but I took a huge break for years when I decided to concentrate on rugby (and girls, for some reason painting little metal soldier somehow didn't seem to attract the fairer sex???). Anyway some how all the information I packed into my thick skull pretty much disappeared over the years.
Thankfully on Saturday Gary (umpire and designated history buff for the day) spent some time filling in the many gaps in my knowledge about the battle.

I was tempted to ask if I could take part in some way (maybe fire off some artillery) however Claymore comes but once a year and you really need to hunt down those bargains. I managed to pick up some Saxon Zastrow Cuirassiers from AB getting a chance to meet Ian and put a face to the emails!