I'm not painting naps at the moment however I did take some pictures of our full collection recently (not totally full as young David took half his guard home and our Brits are not present plus I forgot about my Minifig Prussian brigade!) so I thought this would be a good opportunity to take stock of where we are at.

Pretty much all of David's French army as it stands at the moment. 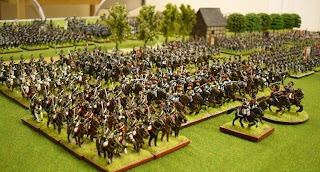 David's cavalry are made up of Minifigs (2nd generation), Battle Honours and also Old Glory. 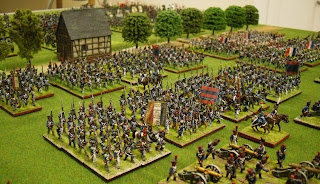 David started us off long ago with his 1st Minifig battalions (I was still at school at the time so 25 years plus). Robert sold David some BH and Neil sent up plenty more BH French that make up most of David's force. There are a few OG French infantry thrown in too. 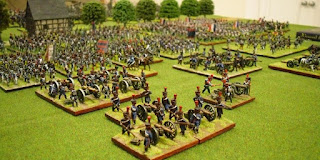 Davids mostly Minifig artillery (I missed a box so there are a couple more batteries). 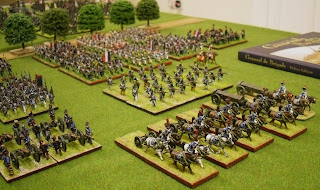 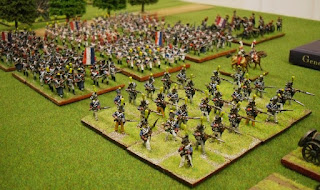 David did these BH up as separate skirmishing voltigeurs, not really seen them in action yet like this?

My own collection as it stands minus 4 battalions of Minifig Prussians and artillery battery.

My Russians and Prussians are pretty much equal in size at the moment.

My poor Russian cavalry commanders desperate for someone to command (watch this space!!!)

My new Blucher taking his place at the head of the army ready for anybody!!! 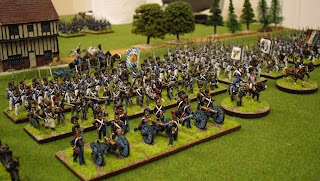 Not forgotten: I really enjoy painting Bavarians however as David has plenty of French I need to concentrate on the main Allies. 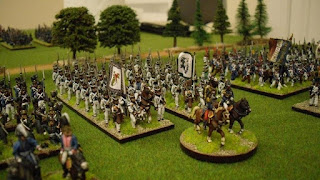 And finally my French and Austrians. The French will get done over the years but only when my Russians and Prussians are more solid. The Austrians are on hold as Cameron has a new job and I have other commitments at the moment.

Hopefully I'll get a couple more units finished before the New Year?!?
Posted by Paulalba at 15:26 38 comments:

I had my brother and nephews French collection at my house for a wee while so I decided to take a few pics of it for my blog. 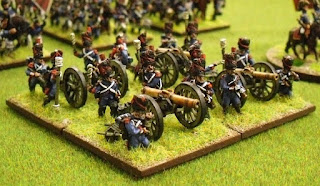 These guys are pretty new to their collection. I won a few packs of OG French and British off eBay at a good price and the old guard foot artillery were the main reason for my bid. 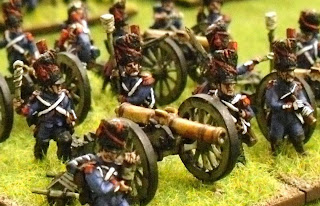 I think the figures are really nice and David Jnr did a nice job on the uniforms. 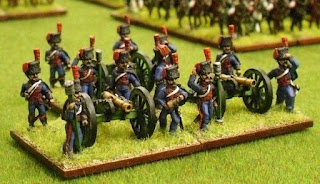 I posted these guys in their WIP state a few months back and this is them finally finished off. 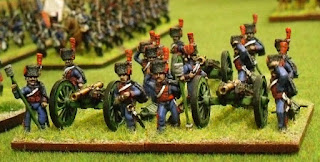 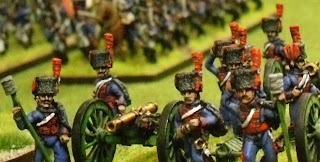 And very nice figures by OG.

Their guard ranks are growing all the time. Middle guard on the workbench at the moment I believe!
Posted by Paulalba at 18:58 19 comments:

This past couple of weeks have been hell at work with the only real break our wargame Sunday past (or the Sunday before I can't recall?). I have had broken sleep due to my shift pattern most of that time and any time I was off I had barely 3 hours to myself to switch off. However I have today and tomorrow free and after returning this morning I took a short nap before getting this command stand finished.
Sorry about the pics again, I took loads and most were a total blur, the shading hasn't came out well and there was no good pic from the rear. 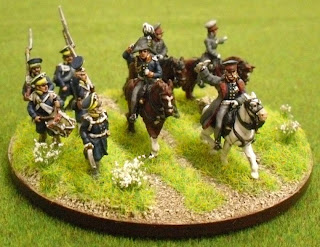 I've had these guys lying around for a couple of years now with the pictures from 1 of my Prussian Ospreys in mind (Blucher surrounded by advancing landwehr). With my recent purchase of Prussians from Darren down in England and a few more from Dirk over in Germany (thanks guys!!!) I figured it was about time I knocked together a command base with the old warhorse.

The Landwehr are spare AB after I put my battalions together and the command figures I believe are AB although they maybe BH? the horses are definitely AB. 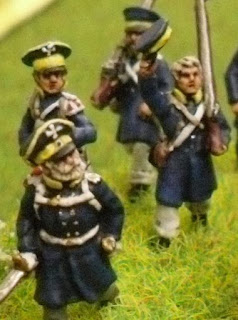 I pinned the head of the landwehr officer and drummer so they are looking over at Blucher etc as they ride past. I put loads of shade into all the figures but hardly any is seen? The officers whiskers came out really well. I gave my landwehr white webbing instead of black just to make them stand out. My landwehr are old veterans and get the best of gear ;0) 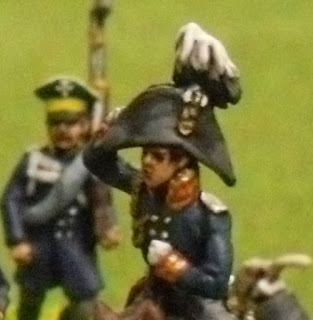 Of all the figures in the bunch this is the only 1 that troubles me. I was told by a friend he is Gneisenau? He certainly looks like the figure in the Osprey Prussian Staff book? The trouble I have is he is in full dress while all the rest are in campaign uniform. Still I was short of Prussian command figure and as he is saluting so he fits my wee diorama well. 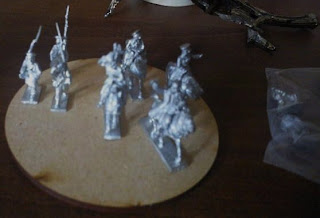 I took this pic from my mobile a couple of weeks ago to show my thinking. The little bag on the right hand side has the 2 headless corpse of the drummer and officer before head repositioning.
A big thanks to John (von Blucher) for keeping me motivated with  my command projects. I was going to throw in the towel after my Austrian commands but John kept me inspired with his own French and Prussian commands and our weekly discussions. Sorry for not visiting every ones blogs more frequently, I am spending less and less time on line due to work and life. Hope everyone is enjoying their painting!

Also I bought a new copy of the GdB Deluxe rules recently from Dave at Caliver Books and the book arrived within a couple of days. Unfortunately a lot of the pages were stuck together at the bottom edge, however when I emailed Dave to tell him about it he sent out another copy straight away no problem. Just wanted to say I am very happy with Caliver Books service!!!
Posted by Paulalba at 15:41 20 comments: