I've been a bit behind with blogging lately as I'm back on my feet again and on a faze back to work, before that I was learning to walk again plus swimming like a mad thing to build my strength in my leg. I had a wee bit of a painting block but have still managed to get a lot cleaned up and at times take a few items a bit further along. I'll share some WIP shots soon.

Anyway, on Saturday I was free to attend the club and JP kindly set up a 2 table Waterloo battle for us all. On our Table it was Plancenoit and on the other table (none of my pics came out under hellish light!!!) was the French final assault on the British lines. 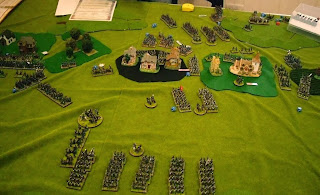 This is a scene from near the end of our battle, poor pics once again from me as I seem to have lost the ability to work our wee pink camera? JP set out the club terrain for us and although the layout was pretty basic lots of fun was had by all (I believe there shouldn't be a gap between the 2 right hand BUA's). Young David played the French and myself and a new guy called Bill had the Prussians. On the other table Des and David Snr assaulted the British lines held by JP and Stuart. 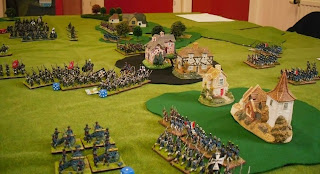 Our objective as you will already know was to take Plancenoit and David's was to stop us (I played this scenario with JP in his garage a couple of years ago so had a wee idea of how it would play out).
Bill took control of my landwehr brigade unit reinforcements came on in turn 4. 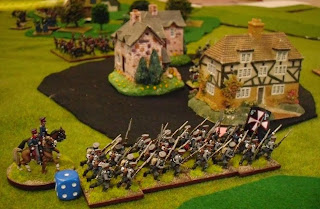 I can only say that my assaults on the BUA were really jammy. David already at a disadvantage because of numbers had some really poor dice in the defensive firing and melee and was pushed out of my 1st objective pretty easily and then my 2nd with a very light fight despite having a +3 for the church. He didn't get his cavalry moving either for some reason choosing to hold them on his right in reserve, that allowed me to get in quick. 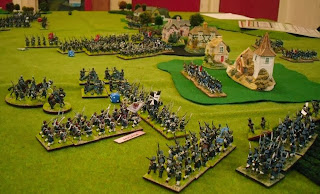 I know this brigade looks a little muddled but I have just taken charge of the landwehr at this point. The great thing about playing the scenarios is you get a chance to see what your lacking and I see I still need plenty of landwehr. I'm half way through another Silesian landwehr battalion that I put to the side but was inspired to get stuck back into after our battle. 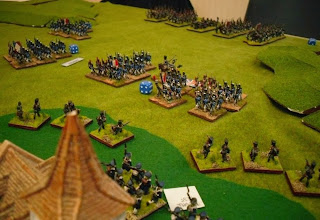 With young David's units kicked out of the BUA he brought on his various guard elements however there really wasn't enough time. He would have needed another 4 hours to have some proper impact. It didn't help matters that I double 6'd David when he got his revitalised brigade onto Assault! 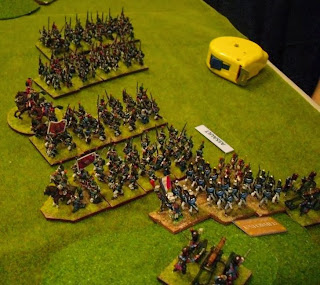 David's middle guard entering the game. with 1 of JP's battalions forced back.  Again sorry about the poor pics 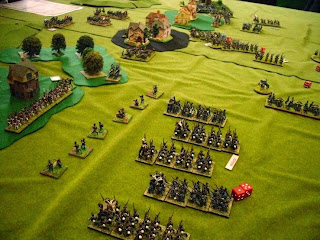 On the left Bill took charge of a large landwehr brigade and landwehr cavalry. He is just getting used to the rules at the moment but is an experienced Naps player of 30+ years. JP's OG landwehr that he bought from me a few months back, It's great to see lead that you had lying around in boxes getting painted up and used! Skirmishers look a little close? The red unit holding this BUA is young David's newly finished Swiss battalion. None of my close up pics came out Ahhh!! so I will show them later as they are brilliant. 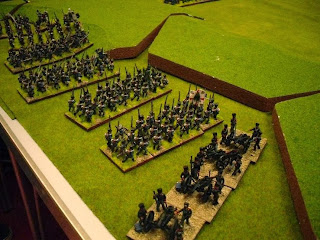 More reserves unused on the day. Also a WIP horse battery standing in for a foot  battery on the day. I have 1 more foot battery on the work bench in the loft so once these 2 are complete I think that will be me finished with my Prussian artillery. 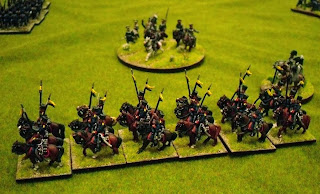 Lancers standing in for landwehr cavalry. I'm getting on well with a landwehr cavalry regiment, horses are all finished and the base shades for the troopers are all done. I Just need a day or 2 to get them to the basing point.

The game was pretty good fun, I would call it a draw as the French guard were just coming into the battle as we finished up. It's a hard 1 for the French from the start. David and I both got a lift from the game with me picking up the brushes and David ordering more young guard that he has wanted for a while. I am planning to start adding to my own French and her allies now.

That is a great looking game!

Good game with good outcomes! Glad to see you're up to painting again. It'll be good to see the results!

Brilliant. Nice to hear your on the mend.
Best wishes.

Nice report Paul, and pictures are nice, don't worry! We can see your beautiful Landwehr, they illuminate the battlefield!
Great work...
All the best,
Phil.

Looks like you had a good game Paul! I personally find the light in that room pretty good for pics! Good to see you back at the club, just sorry it was the weekend I'm away!

Great to see those nice looking figures in action. What rules are you using?

Hi, thanks thanks guys, Dave the rules are General de Brigade. Jamie, I don't know what's up with my pics? Ever since the strawberry jam on lense the wee pink camera hasn't been right, although the bulbs are totally removed top table and they were using the dreaded dark snooker cloth up there.

The new guy Bill was lucky to escape with his life as he spilt his coffee right over the matt next to my newly finished uhlans! Plenty of places to put drinks around the room, especially those polystyrene cups!

Looks fantastic Paul and I echo everyone's sentiments about being truly on the road to recovery - great news!

The game looks sensational and I do love Prussians at the moment.
Cheers

Good to hear your up and walking Paul and a great looking game too! Looking forward to see more of your painted goodness!

Nice to see you felling better, and getting some figs on the table.

Nice game! Game participation is a great motivator for picking up the paint brush. I know it works for me.

Hope you are back on your feet soon.

Echo what everyone else said - get well and enjoy gaming - simple really!
Have fun, Jeremy

Paul - do I hear right? Are you about to start a real Napoleonic army - a French one?

Thanks again for your kind comments and words of encouragement regarding my leg. It's a slow process but I'm getting around pretty well now. Swimming regularly has helped.
best
Paul

sgt Steiner, I'm really sorry, my fat fingers on my phone hit delete instead of confirm for your comment buddy! Ahhhhh!!!

Paul,
Great to see your troops get another workout,and good to hear you've picked up a paint brush again. Good looking game and now you let the cat out of the bag about painting French. 8-)

sorry I missed this one - looks like a great game