I completed my Saxon artillery crews recently and only have the guns to finish however I didn't want to break my painting buzz for the moment so I've continued on painting my Saxon infantry. When I started the infantry again I just cracked on and didn't check my references properly and went for an attractive red faced battalion Niesemeuchel. As soon as I painted my 1st few up I realised they didn't see much action as part of the Saxon brigades in either 1812 or 1813. What can you do? Ah well they look pretty and a Saxon is a Saxon as I always say!!!

Anyway I've continued on with them . . . 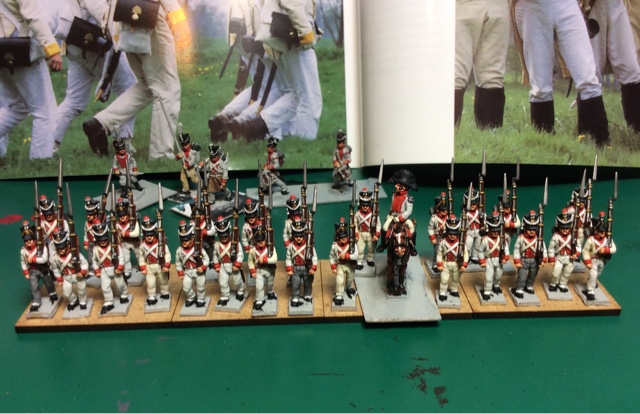 The figures as usual for AB are lovely sculpts however I have to say I had a terrible time cleaning them up, there seemed to be little pieces of tough excess metal all over them, in the gaps between the bedrolls, in the undercuts of ammo box, around the gaiters and worst of all around the front and rear of arms and under hands badly obscuring detail. I let fighting15's know about a number of the problems when I got my last order of Saxons and I chose to keep them as I didn't want to send the problem figures back in case I lost the variety of poses. Ian said he would have a look at the moulds the next time he casts them. However I didn't realise there was so many problems thoughtout the other figures I had purchased previously until I started cleaning them up, it's a shame as the AB Saxons are lovely figures. 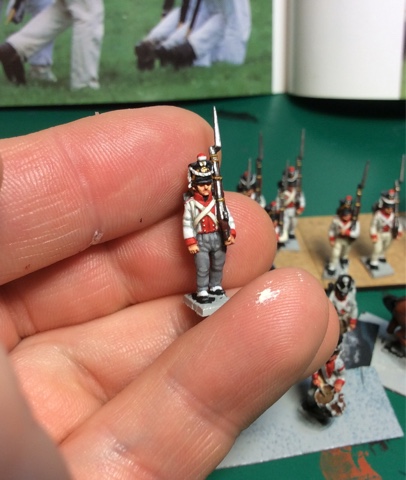 Anyway, I've pushed ahead and have really enjoyed painting them adding grey overalls to some and I also tried to create a yellowish tint to the uniform of many, similar to what is shown on reenactors uniforms. 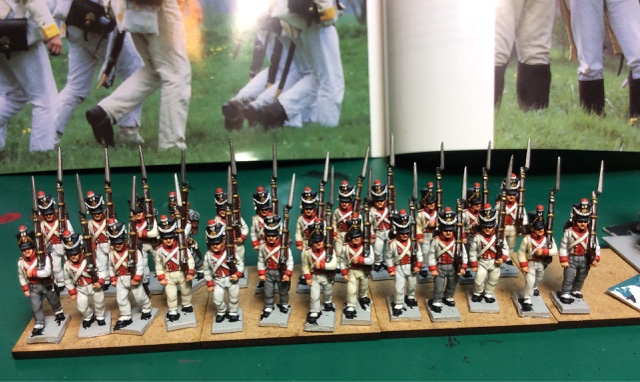 So with the grey overalls and the variation of yellowed whites the battalion is starting to take shape and all the troopers are now finished. 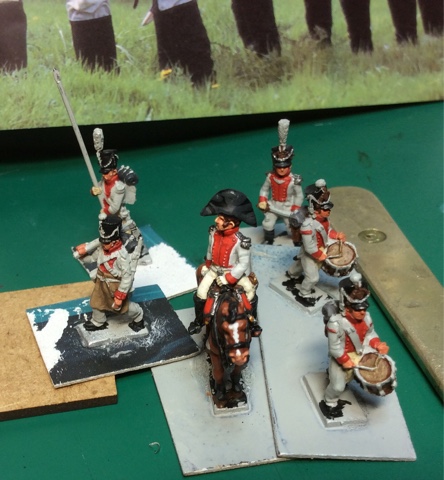 So all I need to do now are the command figures.

I hope everyone is getting plenty figures painted And or the odd Wargame in?

Happy Wargaming!
Posted by Paulalba at 17:56

Evenwith all the problems with cleaning up these figs, they turned out great. I certainly didn't notice any loss of detail. Really like these guys. I do wanna add to my own force of Saxons. Are you planning on adding any cavalry to the force?

Thanks Kurtus, I put the time in cleaning them up and a lot of the areas are at the rear. Yeah I plan on adding cavalry, prinz Clemens lancers, polenz light cav and maybe hussars?

For fun I plan eventually to add zastrows and garde de Corp heavies but to add to the French attack at borodino.

They do really look the part, top work Paul!

White uniforms are the hardest to paint in my opinion and you've done a fantastic job with these Paul!

Those are looking great Paul! Whenever I start my AB Naps your blog will for be my first point of reference.

your brush work on your wee-Saxons ;o) are gorgeous! as a matter fact Paul, all of your miniatures painting work are awesome!

That white is top notch Paul. I know I've asked this before, but what size bases are you using? Looks like a single rank per base, but in what dimensions?

That is a cracking unit Paul but you really need to get some sun on your face over here in the Peninsula and paint some red coats !
All the best Gav .

Excellent job on these uniforms, as always!

Thanks Phil, much appreciated buddy!

Thanks Gav, I'll leave the Brits to you as I have to many other armies in the go now.

Thanks FMB, I made a mistake in my 1st battalion basing them in the cavalry bases I use (30mmx36mm) so I stuck with it so 8 figures on a 36mm front and I like the way they fit.

Thanks Phil, your far to kind!!!

Thanks Christopher, I've seen many times how you paint and your in a league of your own!

Thanks Rodger, from a top painter like yourself that really kind of you!

Many thanks Ian, was great to see your Waterloo game. I remember when we were both starting out our blogs!

Thanks Ray, been really enjoying the painting side of them. I see you subscribed. Does this mean posties rejects videos are imminent?

Outstanding work, Paul! Your Saxons are first rate despite any casting flaws (although I didn't see any). Does the casting issue persist for the Saxons if ordered directly from Eureka?

Cracking work on that white and the figures Paul!

Thanks Fran, didn't take to long either. Happy how it came out.

The level of detail you achieve on 15mm never ceases to amaze me. I'd be happy to paint half as well as that scale!

They look super, Paul! I love the Saxon flags too, not to mention their outstanding Cavalry!

Thanks Jonathan,I honestly couldn't say. I would hope if you ordered them the person casting/supplying them would check them over when you ordered. I've cut back most of the excess metal and filled areas that had problems although you can still see that some of the leather straps on the chest of 1 set of a pose in particular is still rough.

ThanksMillsy, Really nice of you to say buddy, very much appreciated!

Thanks Peter, yes saxons of both early and late are an attractive army. I Need to keep focuses to make a decent sized force!

Thanks Carlo although it isn't so striking as you would think a lot of my older work is average at best. I've inky really been putting nicer stuff together this past year or 2.

Very nice work Paul! The variety in shades really helps the unit come alive! Too bad about the bad casting quality. Seems like they've had a really bad batch as I've never had any issues with any AB stuff coming through Fighting 15s.

Thanks Samuli, only had this with the Saxons. So all the Saxons you bought were fine from fighting 15's?

Ahhh.... takes me way back to an AB combined Grenadier Battalion I did with Green and Blue facings Paul (Von Anger) I think was the battalion.

They are superb mate, love them.

Thanks Darren, good to see your still enjoying naps. I think you passed them onto me with some nicely painted Austrians? My friend slipped them into his armies and they continue to fight on. The Austrians got a run out a few months back!

As usual excellent brush work, you must have quite a few nationalities now?

Amazingly quick turn around! You're on fire

The Saxon Guards are a very colorful unit Paul, red coats with yellow facings...... get your brushes moving mate. Lol

Magnificent work again Paul. These look a treat! The mix of whites in the trousers looks really authentic. May I ask what shades and mixes you used? I have a slab of Austrians on the horizon, and a view that "pearl-grey" should not look like new fallen snow.

Napoleonic Saxons are one of my faves and these are right up there, far more colourful than those endless Prussians you and I keep pushing around! I look forward to the first of the cavalry. Best wishes, JJ

Paul: Yes, they've all been good. The only flash has really been on the tips of the bayonets and it was easily to clip off.

I'm cleaning up grenadiers now and they are much better, only really 1 pose that has the musket solid to shako and cords, it takes a delicate piece of cutting but isn't to dangerous for the fingers. The guy with the elbow bent has a little area of flash in the bend at the musket hammer blocking belts but other than that they should be easy to clean.

Thanks Jeremy, yeah I'm getting pretty excited with Saxons now. I'll see if I can stay ficused!

Thanks Ken, Russian, Prussian, French, Saxon, Bavarian on the go. I have Austrians and poles in the wings. I'll see if I can get some of the smaller parts of my collection caught up a bit this coming year.

Thanks Rupert,
I really enjoyed the uniform on the Saxons.

Good to hear from you Darren! I still need to add the epaulettes to the Saxon guards before they can begin. You still doing 28mm naps?

Hi Craig,
Thanks!
I primed them with a light grey spray paint, for the white trousers/coats I used foundry Austrian white as the mid tone with Vallejo off white as the highlight sparingly. With the yellow shades I used Vallejo Iraqi sand, pale sand and ivory highlight. For belts on the uniforms I have skipped the pale sand mid tone and it works better.